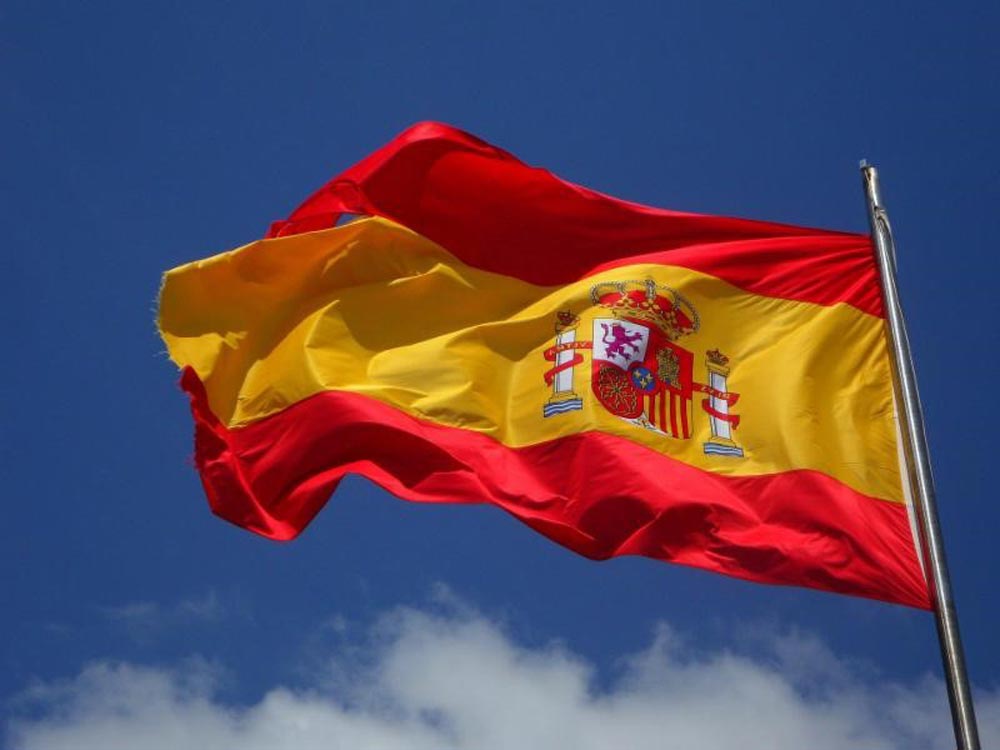 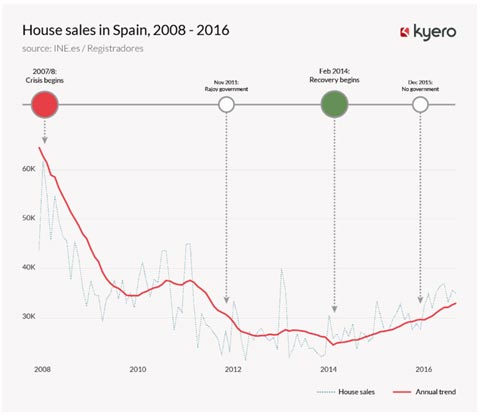 As well as being a good year for Spanish property in general, 2016 was also a record-breaking year for Kyero.com. Despite Spain’s stubbornly high unemployment rate, weak economy, restricted credit and a period of almost no government, the property portal has flourished – much like the country’s housing market.

“Spain’s market has two unusual advantages. Firstly, it had nowhere to go but up. The 2008 crisis completely shredded the housing market, and little short of a zombie apocalypse could have sent it lower. Secondly, Spain has incredible international appeal; with one in five property sales going to foreigners, it can endure weak local demand. British, French, German, Dutch, Belgian, Italian and Swedish buyers are picking up the slack, which has been good news for the wider market and for those involved in selling property in Spain.”

The UK’s Brexit vote looked set to disrupt the market balance in mid-2016, given that British buyers top foreign demand in Spain, but the anticipated drop-off in UK demand never materialized. Instead, overseas searches for Spanish property via Kyero.com hit all-time highs after the vote, up over 50% on 2015. The portal’s largest agents also reported seeing record attendance at UK investor shows. Buyers were certainly talking about Brexit, but still looking for Spanish in their droves while they did so. Q3 2016 figures from the Spanish land registry confirmed the trend – foreign sales in Spain were close to all-time highs.

The situation in the UK goes some way to explain this, according to Kyero.com’s Richard Speigal,

“The British housing market is currently moribund, with prices rising way beyond all the laws of affordability, and transactions at historic lows. The winners of this situation are older Brits who find themselves sitting on a vast trove of property wealth (while homeownership becomes a dying dream for their kids).

“In short, the 50+ British buyers who so love Spain are sitting on huge equity piles and Brexit didn’t diminish their wealth. As a group, British buyers are getting richer. Q3 sales to Brits may have slowed, but they are only blinking rather than quitting. The fundamentals remain healthy.” 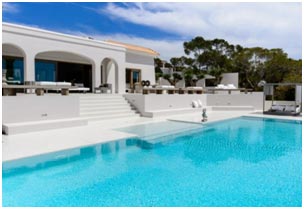 The one area that Brexit has impacted is the hunt for value and this will translate to a key trend in the Spanish property market in 2017: the search for good value properties that offset the drop in sterling’s value. Evidence is already emerging of the benefits of this on lower priced destinations, which look set to boom in 2017.

With this in mind, and using completed sales data (via land registry statistics) and search data from Kyero.com (as a forward indicator of buyer sentiment), along with the international mix of buyers in each destination, and relative property prices, Kyero.com has identified the top four Spanish property market gems for 2017.

Having seen much less development than its neighbours, Almeria retains an authentic charm that has proven popular with almost every nationality of European buyer. Q3 sales rose a massive 93% YOY, and with an average price of €129,000 it is nearly half the cost of Kyero’s national average.

Almeria is charming, well connected and very affordable and expectations are that an ever larger number of overseas buyers will discover it in 2017. Trending destinations include Vera, Mojacar and Albox.

International investors buy more houses in Alicante each year than any other province of Spain, driving over half of all housing transactions. While this could make it susceptible to shocks, it’s strengths are hard to beat: excellent connections, fabulous beaches, steady sales growth and prices 10-15% lower than Kyero.com’s national average.

Alicante is a solid performer, and very hard to bet against. Trending destinations include Torrevieja, Alicante and La Marina.

The western Canaries have had an excellent year, with average prices growing steadily at 5% to €249,000 – almost exactly in line with the national average. This is the first destination in Kyero.com’s portfolio to see Italians overtake British buyers as the dominant international buyer group. Low cost flights, year-round sunshine, and a penchant for building the holiday apartments that foreign buyers crave have all made Tenerife a property hotspot. Trending destinations include Playa de las Americas, Costa del Silencio and El Medano.

This is a final – and more speculative – pick for 2017. The gravity defying housing market in Ibiza saw average prices grow 20% in 2016 to over €1.1m, with similar growth in sales. The data is hard to follow, but that’s because Ibiza has something that can’t be boiled down to a number: cachet.

This picturesque island has become a hub for international wealth, helped in no small part by Spain’s benign tax environment for high net worth individuals. With their numbers on the rise, we expect Ibiza to continue being the place they’ll show it off. Trending destinations include Ibiza Town, Sant Josep de sa Talaia and Santa Eulalia del Rio.

What does 2017 hold in store for UK property investors?