Spain's unemployment rate inches up to 12.87% in Q4 2022
Our website publishes news, press releases, opinion and advertorials on various financial organizations, products and services which are commissioned from various Companies, Organizations, PR agencies, Bloggers etc. These commissioned articles are commercial in nature. This is not to be considered as financial advice and should be considered only for information purposes. It does not reflect the views or opinion of our website and is not to be considered an endorsement or a recommendation. We cannot guarantee the accuracy or applicability of any information provided with respect to your individual or personal circumstances. Please seek Professional advice from a qualified professional before making any financial decisions. We link to various third-party websites, affiliate sales networks, and to our advertising partners websites. When you view or click on certain links available on our articles, our partners may compensate us for displaying the content to you or make a purchase or fill a form. This will not incur any additional charges to you. To make things simpler for you to identity or distinguish advertised or sponsored articles or links, you may consider all articles or links hosted on our site as a commercial article placement. We will not be responsible for any loss you may suffer as a result of any omission or inaccuracy on the website. 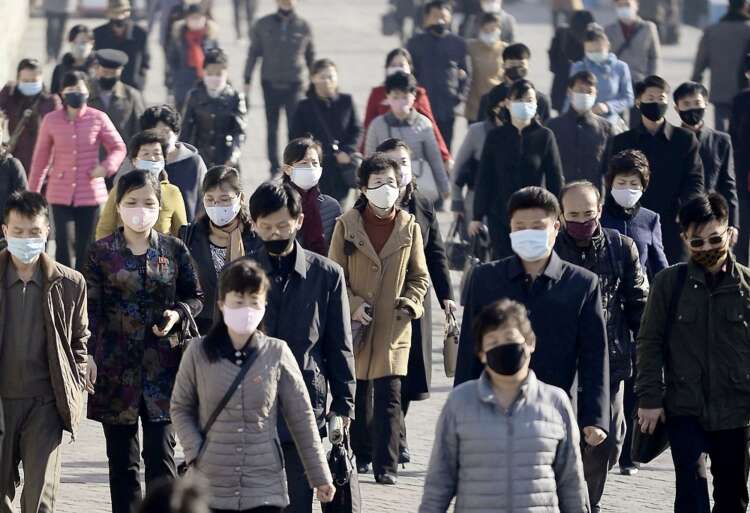 By Hyonhee Shin and Soo-hyang Choi

The isolated North confirmed on Thursday its first COVID-19 outbreak since the pandemic emerged more than two years ago, declaring the “gravest national emergency” and imposing a national lockdown.

The outbreak came as the country steps up an “all-out fight” against drought, with leader Kim Jong Un warning of a tense food situation due to the pandemic and last year’s typhoons.

State media said last week that factory labourers and even office workers and government officials had been dispatched to help improve farming facilities and secure water resources across the country.

Droughts and flooding have long posed seasonal threats to North Korea, and any major natural hazards could further cripple its reclusive economy.

The pandemic had already slashed trade and international food donations, and in a country heavily reliant on human labour in agriculture and lacking industrial and medical infrastructure, a brewing COVID-19 crisis could further exacerbate food shortages, analysts said.

“In North Korea, economic activity requires a lot of people’s movements, and you can’t expect trade or large aid from China,” said Lim Eul-chul, a professor of North Korean studies at Kyungnam University in South Korea.

“But now farming activity could be scaled back and distribution of fertilisers, raw materials and equipment would become difficult,” he added.

U.N. aid agencies and most other relief groups have pulled out of the country amid extended border shutdowns and say it is difficult to gauge exactly how bad the situation is there.

But Ji Seong-ho, a South Korean lawmaker who defected from the North in 2006 and has campaigned for North Koreans’ human rights, said the virus could spread rapidly due partly to the lack of a working medical system.

“The COVID outbreak could hit the ongoing farming season hard, and food security might become really serious this year and next,” he told a parliamentary session.

International sanctions over the North’s weapons programmes restrict broad swaths of its trade, and the country sealed its border in early 2020 to prevent the virus.

A reopening of border trade early this year raised a glimmer of hope, only to be halted in April because of COVID outbreaks in China, which has recently imposed extremely tight restrictions in major cities like Shanghai. Satellite imagery shows goods sitting for weeks or months in quarantine at land and sea port facilities.

Cheong Seong-chang, director of the Sejong Institute’s North Korea studies centre in South Korea, said the North could impose limited measures – unlike China’s sweeping moves – to ensure some activity continues, referring to Kim’s order to keep the lockdowns to the city and county levels.

“But over time, the lack of interregional movement would hurt supply and production, and North Korea might eventually face a serious food crisis and the kind of great confusion that’s been seen in China recently,” Cheong said.

In March, the United Nations urged Pyongyang to reopen its borders to aid workers and food imports, saying its deepening isolation may have left many facing starvation.

The World Food Program estimated that even before the pandemic emerged, 11 million people, or more than 40% of the North’s population, were undernourished and needed assistance.