Below a pyramid, a treasure trove sheds new light on ancient Mexican rites 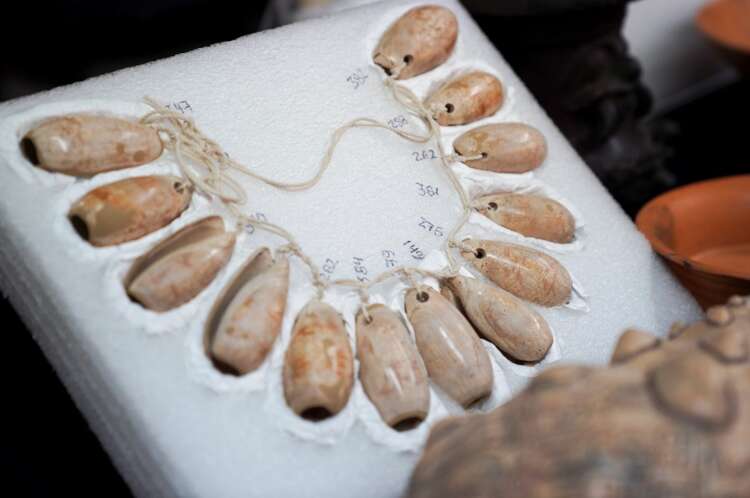 TEOTIHUACAN, Mexico (Reuters) – More than a decade after Sergio Gomez began excavating a tunnel under a towering Mexican pyramid, the archeologist still spends most of his time studying the massive cache of sacred artifacts carefully placed there by priests some 2,000 years ago.

The volume and variety of objects hidden in the sealed tunnel under Teotihuacan’s ornate Feathered Serpent Pyramid has shattered records for discoveries at the ancient city, once the most populous metropolis of the Americas and now a top tourist draw just outside modern-day Mexico City.

Over 100,000 artifacts from the tunnel have been cataloged so far, ranging from finely-carved statues, jewelry, shells, and ceramics as well as thousands of wooden and metallic objects that mostly survived the passage of time intact.

On a recent tour of the tunnel and conservation workshops where his 30-member team pores over the trove, Gomez showed off some of the dig’s most spectacular and until now unreported finds – all part of ceremonial offerings left along the 100-meter-long (330 ft) tunnel, which ended in three chambers directly under the pyramid’s mid-point.

“Can you see it?” Gomez asked, shining the light of his cellphone on a tennis-ball-sized carved amber sphere he picked up from a workshop table. Illuminated, it looks like molten lava.

It is the first time an ornament made from amber has turned up in Teotihuacan. Found with a small top and residue inside that awaits further analysis – Gomez speculates it may be tobacco – it likely hung around a priest’s neck.

As in other ancient Mexican societies, the priests who entered the tunnel likely ingested hallucinogenic plants or mushrooms as part of rituals, Gomez said.

The tunnel, which is tall enough in most places to walk through and is around 12 meters (40 ft) underground, was designed to dazzle, he explained. The walls and even the floor were coated with fine bits of iron pyrite, popularly known as fool’s gold due to its resemblance to the precious metal.

“We can imagine when the priests entered with a torch how it would have sparkled as the flame moved,” said Gomez, who believes the tunnel was made to recreate the underworld of their cosmovision and used to initiate new rulers.

Scientific dating shows that the damp, never-looted space was in use for more than two centuries through 250 A.D.

Teotihuacan, a wealthy contemporary of ancient Rome and Han China, thrived from about 100 B.C. to 550 A.D. and was home to up to 200,000 people mostly living in multi-family stone compounds painted with colorful murals.

Much is unknown about them, including what language they spoke and whether they developed a system of writing https://www.reuters.com/article/us-mexico-tourism-teotihuacan-feature/beyond-public-view-scholars-unravel-mystery-of-writing-in-ancient-mexican-city-idUSKCN26D1AG akin to that of the Aztecs, who dominated the area some eight centuries after Teotihuacan’s fall and revered the ruins.

Walking through the now-empty tunnel, Gomez stops where a large offering was found. He describes 17 separate layers of shells meticulously laid down by priests, one on top of the other, with the bottom layers crushed.

“But that’s because they themselves were stepping on them,” he said.

Gomez stresses that his dozen-year excavation of the tunnel, which had filled with mud over the centuries, was equally meticulous, so much so that bits of human hair and even skin were likely recovered.

It appears that ceremonies in the tunnel involved the offering of gifts to the lords of the underworld, and to the city’s main deity, the storm god. Several dozen nearly-identical shiny black jars sculpted to resemble the latter have been discovered.

Among the richest offerings are hundreds of objects made of so-called imperial jade, one of the world’s most expensive gems, including ear spools, necklaces and pendants – one in the form of a crocodile.

Several thousand once-glittering iron pyrite pieces were unearthed. Possibly imported from as far away as Honduras, they include beads, disks and even the bottom half of a cup.

Around 8,000 wooden objects – plates, bowls and more – were unearthed, as well as the skulls and claws of some three dozen animal species, especially predators like jaguars and pumas.

Beyond traditional restoration work, Gomez’s team is also developing three-dimensional digital recreations of the artifacts as they originally would have appeared, so they can eventually be accessed online.

The final physical discovery made in late July proved especially satisfying for Gomez.

In a circular pit carved into the tunnel floor previously missed by laser scans, priests had tossed four bunches of flowers. On top, they placed a heap of wood, handfuls of corn, chile, and nopal seeds, plus a miniature stone carved pyramid.

Finally, they set it all on fire.

Thanks to the charred wood, Gomez will soon be able to pinpoint the year the smoky ritual took place.

The flowers were unprecedented, the first time intact plant remains have been found at Teotihuacan.

“It’s just so unique,” he said, hunching down just off the pit, wiping his brow.

“It makes you feel so close to the people who were here.”

One million without power as Ida leaves trail of destruction