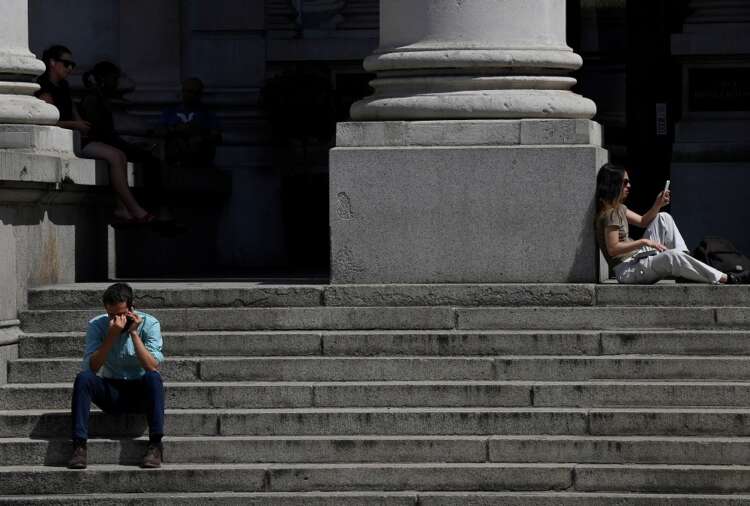 (Reuters) – The Bank of England raised interest rates on Thursday by half-a-point in its biggest move in 27 years to tame inflation.

Central banks in the United States, Canada, Australia, Switzerland and elsewhere have lined up with aggressive rate rises recently and the European Central Bank last month delivered its first rate hike since 2011.

Japan, which is yet to lift rates in this cycle, is the holdout dove among the 10 big developed economies.

In total, those central banks have so far raised rates in this cycle by a combined 1,315 basis points.

Here’s a look at where policymakers stand in the race to contain inflation. 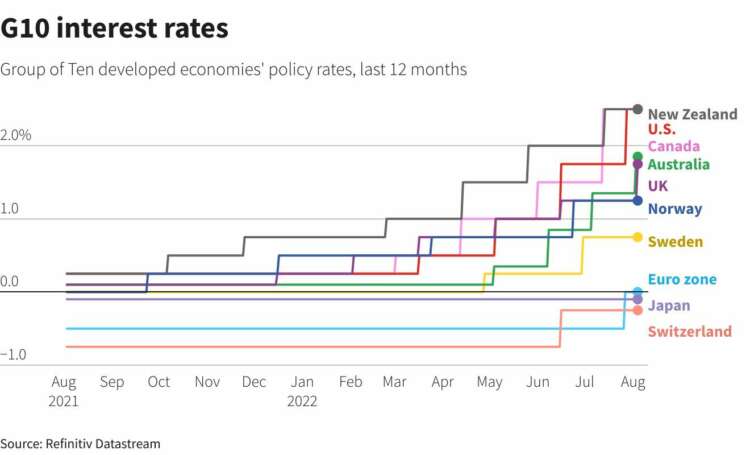 The Federal Reserve last week delivered its second straight 75 bps rate rise. Fed officials have reiterated their determination to get on top of red-hot inflation with tighter monetary policy.

U.S. inflation rose to 9.1% in June, the highest level in more than 40 years. Markets price in a roughly 48% chance of a third 75 bps move in September. Even as growth worries mount, analysts say containing inflation will remain the Fed’s priority. 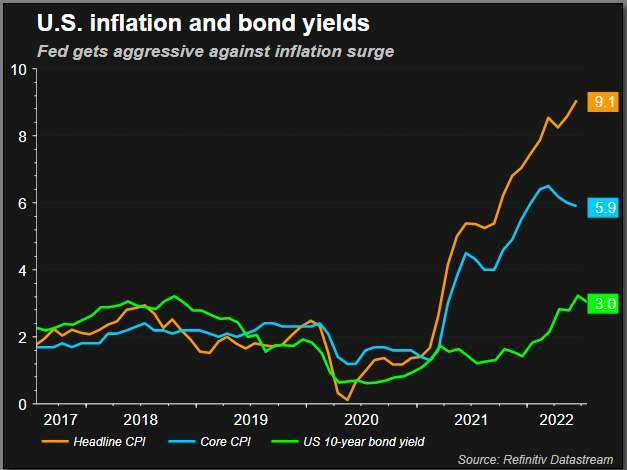 The Bank of Canada last month delivered the first 100-basis-point rate increase among the world’s advanced economies in the current policy-tightening cycle. It lifted its key policy rate to 1.5%.

With annual inflation running at 8.1%, the highest in 39 years, analysts reckon another big rate hike is likely.

Canada in the hawkish camp: https://fingfx.thomsonreuters.com/gfx/mkt/zdpxobjywvx/CA2107.PNG 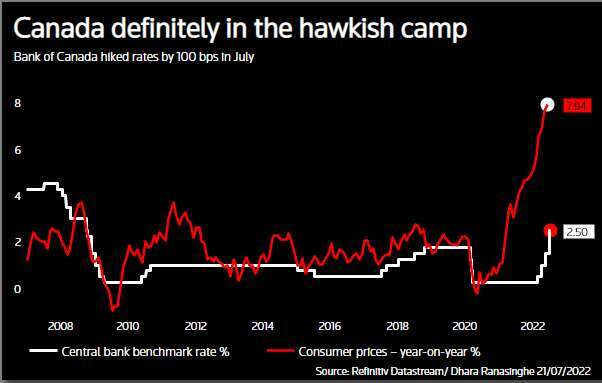 The Reserve Bank of New Zealand delivered its sixth straight rate rise on July 13, lifting the official cash rate by 50 bps to 2.5%, a level not seen since March 2016.

It remains comfortable with its planned aggressive tightening path to restrain runaway inflation. 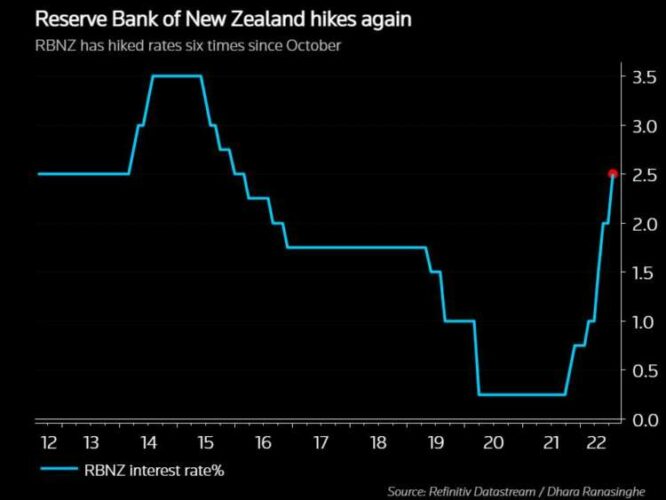 The Bank of England on Thursday lifted its key rate by half percentage point to 1.75% – its highest level since late 2008.

But the BoE warned that Britain was facing a recession with a peak-to-trough fall in output of 2.1%, similar to a slump in the 1990s but far less than the hit from COVID-19 and the downturn caused by the 2008-09 global financial crisis. 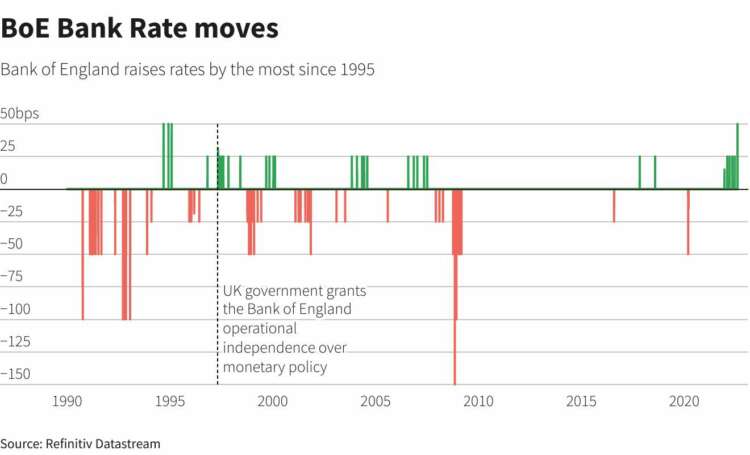 Norway, the first big developed economy to kick off a rate-hiking cycle last year, raised rates by 50 bps on June 23 to 1.25%, its largest single hike since 2002.

The Norges Bank plans to raise rates by 25 bps at each of its four remaining policy meetings in 2022, although larger increments are also possible, Governor Ida Wolden Bache said.

The Reserve Bank of Australia on Tuesday raised rates by 50 bps, tightening policy for a fourth month running. But it tempered guidance on further hikes as it forecast faster inflation but also a slowdown in the economy.

The RBA has now delivered 175 bps of hikes since May, taking its key rate to 1.85%, in the most drastic tightening since the early 1990s. 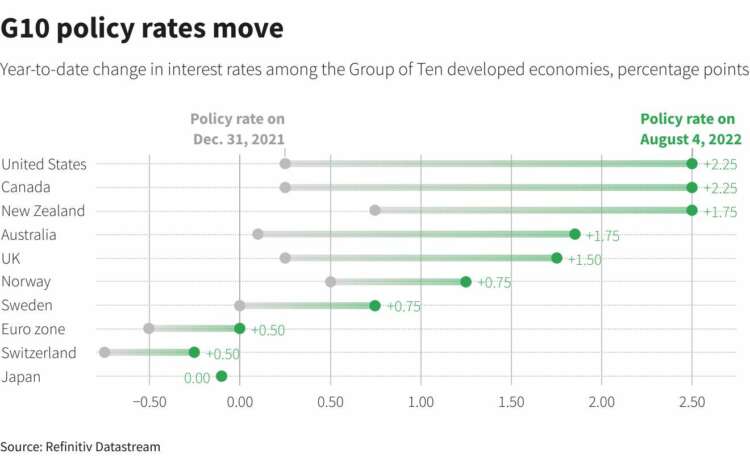 Another late-comer to the inflation battle, Sweden’s Riksbank delivered a half percentage-point interest rate hike on June 30 to 0.75%, its biggest hike in more than 20 years.

As recently as February, the Riksbank had forecast unchanged policy until 2024, but governor Stefan Ingves now expects rates to hit 2% in early 2023 and said 75 bps moves are possible.

The European Central Bank last month hiked its deposit rate by 50 bps — more than expected — in its first rate rise since 2011 to fight soaring inflation. The move to raise rates to 0% ended an eight year experiment with negative rates.

The bank is expected to hike rates again at its next meeting on Sept. 8. 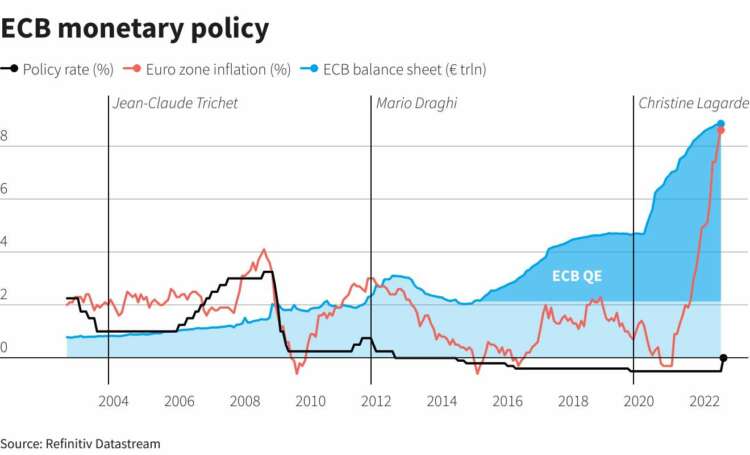 Recent franc weakness has contributed to driving Swiss inflation towards 14-year highs and SNB governor Thomas Jordan said he no longer saw the franc as highly valued. That has opened the door to more rate hikes.

Japan is the holdout dove. The Bank of Japan in July maintained ultra-low interest rates of -0.1% and signalled its resolve to keep them that way even as it projected inflation would exceed its target this year.

BOJ Governor Haruhiko Kuroda said he had no plan to raise rates or hike an implicit 0.25% cap set for the bank’s 10-year bond yield target, because Japan was still recovering from the pandemic and its terms of trade had worsened. 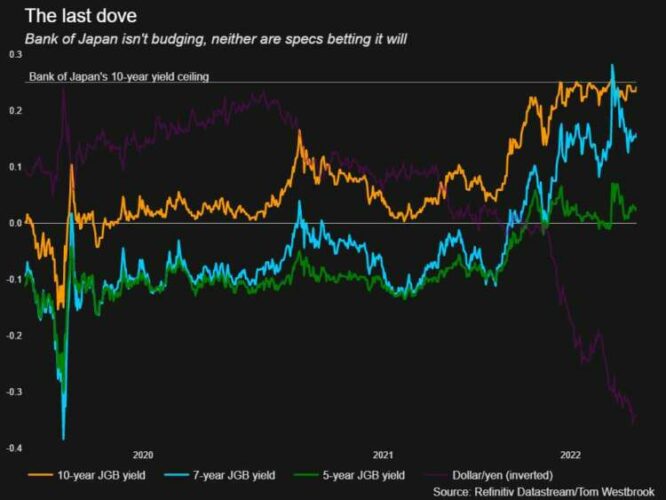