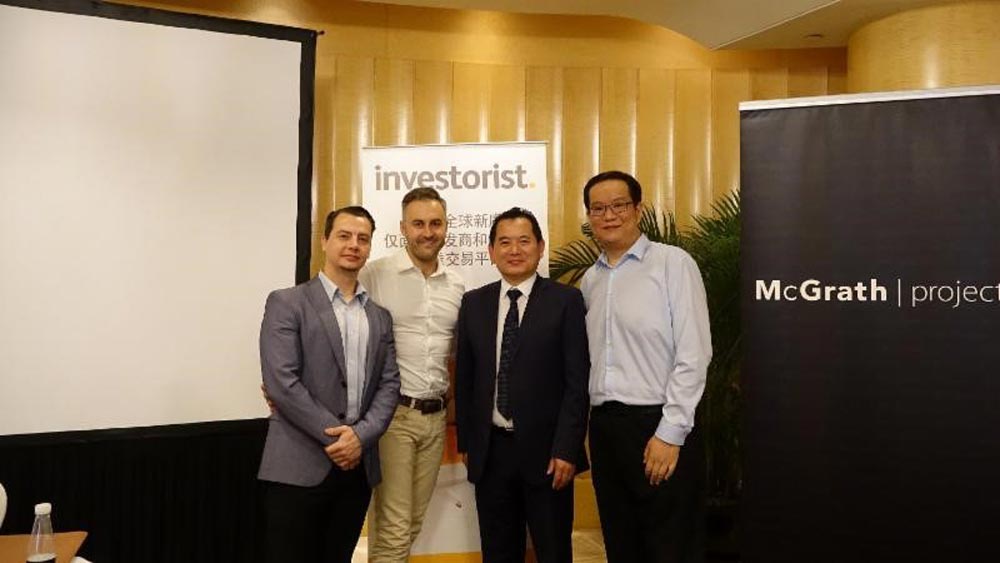 Revolutionary property trading platform Investorist has reported that China remains the most promising source of funds for overseas developers, following its China Connection event held over 5 to 9 September 2016.

Spanning Beijing and Shanghai, the event saw industry experts come together to consider the current – and likely future – state of the international property investment market.

Senior representatives from more than 50 agencies from across China attended, with in excess of US$1b of property on offer from six international developers. Investorist set up one-on-one meetings between the selling agents and developers, carefully matching each project with the most relevant parties.

“The success of the China Connection event has been very gratifying and with many attendees already committing to our next show, it has exceeded our already high expectations. They say in China that ‘September is Gold and October is Silver’ when it comes to selling property, and Golden Week (1-7 October 2016) is the peak week of the year for selling property. All Chinese take off the whole week to take advantage of the national holiday, giving people time to meet with their local agents and advisors, research international purchases, discuss their plans with their families and sign contracts.

“Ahead of Golden Week, we were delighted to discover the most favoured locations of Chinese selling agents. The USA tops the list, while the UK and Australia are also important markets. Agents are seeking property investment for both now and future years – they are committing long-term to their preferred locations and China is clearly the most promising source of funds for overseas developers right now.”

In the US, it is California, New York, Florida and Texas that are attracting the most attention, according to the property developers and master agents / lead brokers who attended the Investorist event.

In the UK, London and Manchester hold sway, with some agents reporting enquiries up by more than 100% since the Brexit vote, thanks to the devaluation of the pound. However buyers are more cautious, which is translating into longer conversion times – the sales themselves are still going ahead. Property priced between £100,000 and £300,000 for fixed income real estate projects were the most popular investment choice.

In Australia, townhouses and single-family dwellings in leading cities were found to be the most sought after properties. Chinese investment in Australian property was impacted significantly when the policies of the major Australian banks came into effect in May 2016, with lending approvals cut to investors with pure overseas income, where the source of funds was not clearly identified. The result has been a notable drop in the pace of Chinese investment in Australian real estate.

However, most agents are optimistic about the future and are still keen to source Australian properties. Many are looking to expand the types of investment product they offer to clients in order to prepare for 2017, when they expect the Australian investment loan market to be back on track again.

Looking ahead, it seems proptech is firmly on the agenda for Chinese agents dealing in global real estate. Investorist’s clients are already users of a sophisticated B2B platform with proprietary property search, marketing, sales and stock management tools, and with the Chinese renowned early adopters of new technology, proptech is no exception.

Investorist is rapidly earning a reputation as the most valuable and effective company in China for facilitating B2B cross border property transactions. Investorist is already preparing for its next show in late October 2016. Two of those who attended the September China Connection have already booked to attend the October show; while one developer has since slashed his media spend in order to focus more on B2B sales, thanks to the success experienced through Investorist’s China Connection.

What is the future of IP Management?