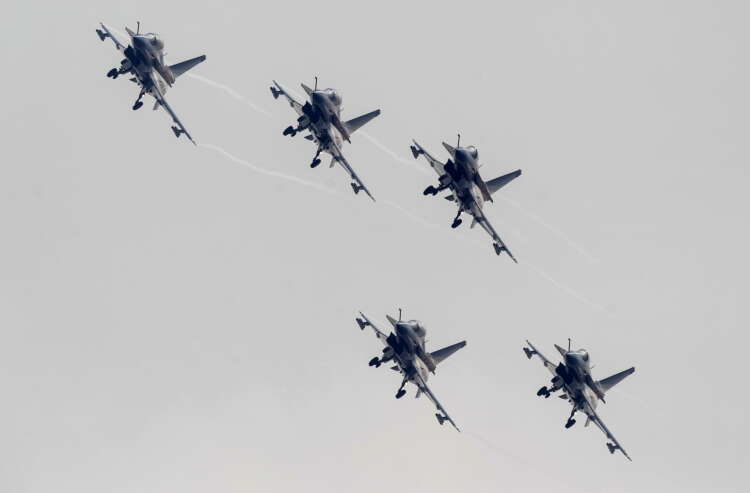 ZHUHAI, China (Reuters) – China’s drive for self-sufficiency in aerospace and its growing military prowess will be on display at the country’s largest air show this week, in an event set against the backdrop of the coronavirus pandemic and trade frictions with the West.

The normally biennial Airshow China in the southern city of Zhuhai, delayed by a year due to COVID-19, will be a mostly domestic affair because of tight quarantine rules.

“The fact that Airshow China is happening at all, when the global air show calendar has been pretty disrupted, allows China to show it has returned to post-COVID normalcy,” said Douglas Barrie, a senior fellow for military aerospace at the International Institute for Strategic Studies (IISS).

Local aerospace and defence firms have ramped up their presence significantly. Major Western suppliers like Airbus and Boeing will send their China-based teams, and there will also be a virtual component for those unable to travel.

The country’s efforts to improve homegrown aerospace technology will be in the spotlight at a time of a growing strategic rivalry with the West.

“As China faces increasing threats from the West, it needs to improve its military-industrial, aviation and aerospace capabilities,” said Song Zhongping, a military commentator and former PLA instructor on missile technology.

Trade frictions with the West are also accelerating China’s desire to reduce its dependency on foreign-made commercial products.

Commercial Aircraft Corp of China’s (COMAC) C919 narrowbody plane, due to be certified this year, is made up mostly of Western parts but the mix is expected to change over time as Chinese technology advances, with the engines a key target for eventual domestic replacement.

More than 100 aircraft have registered for display in the air or on the ground as China shows off its military might and its space ambitions, including a next-generation crewed rocket and heavy-lift launch vehicle.

The flying displays will feature some products China wants to export, including the AG600, the world’s largest amphibious aircraft, designed for fire-fighting and sea-rescue roles.

The Wing Loong II, an armed drone similar to the American MQ-9 Reaper, has already been sold to customers including the United Arab Emirates, Saudi Arabia, Egypt and Pakistan as China competes against Western rivals for more military exports.

A new series of drone products named Feihong, including an unmanned helicopter, loitering missiles and a new generation of stealth drones, will make their debut at the show.

“Beijing is intent on not just pushing locally made military aircraft and aerospace technologies, but also its ability to address almost any military requirement out there,” said Kelvin Wong, a Singapore-based defence technology analyst at Janes.

The show comes as analysts warn Asia may be sliding into an accelerating arms race as countries react to China’s military growth.

The United States and its Asian allies have expressed growing alarm at Beijing’s military buildup, pressure on Taiwan and deployments in the contested South China Sea.

Chinese-claimed Taiwan has complained for a year or more of repeated flights by China’s air force near the democratically governed island.

The United States, Britain and Australia this month established a security partnership that will involve helping Australia acquire nuclear-powered submarines.

(Reporting by Stella Qiu in Zhuhai and Yew Lun Tian in Beijing; additional reporting and writing by Jamie Freed in Sydney. Editing by Gerry Doyle)

UK Insolvency Restrictions – Hoping for the Best but Preparing for the Worst?

Iceland will have a male-majority parliament after all, election recount shows