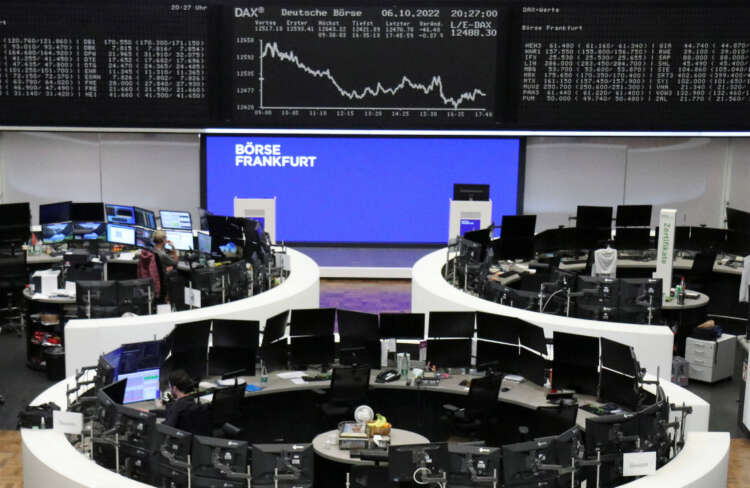 (Reuters) -European shares slipped on Friday, led by semiconductor firms after weak earnings and forecasts from Samsung and Advanced Micro Devices, while recession fears lingered amid signs that central banks would remain aggressive with policy tightening.

The index closed lower on Thursday after minutes from the European Central Bank’s last meeting fanned fears about the state of inflation in the euro zone and aggressive policy moves to tame it.

All eyes are on the U.S. nonfarm payrolls report, due at 1230 GMT, which will show job growth likely slowed in September, although overall labour market conditions remain tight, providing the Federal Reserve with cover to continue hiking rates.

“The reason this data set is a big one, arguably the biggest since markets began to unravel, is because the data will show if the Fed’s enthusiastic interest rate hikes are now being felt in the jobs market,” said Sophie Lund-Yates, lead equity analyst at Hargreaves Lansdown.

“Today’s news will shape the Fed’s monetary decision in November.”

The STOXX 600 had rallied earlier this week after a smaller-than-expected rate hike by Australian central bank and softer U.S. economic data spurred hopes of central bank pivot. The index has gained 1.9% so far in the week and is on pace for its best weekly performance since late July.

Meanwhile, data showed German retail sales fell more than expected in August, while industrial production contracted as supply bottlenecks remain due to pandemic-related distortions and the war in Ukraine.

Among stocks, European chipmakers fell after South Korea’s Samsung Electronics Co Ltd and U.S. chipmaker AMD signalled the chip slump could be much worse than expected.

Infineon, BE Semiconductor, Soitec, Nordic Semiconductor, ASML, STMicroelectronics and ASMI dipped between 1.6% and 2.9%, dragging down the broader tech sector by 1.7%.

Credit Suisse rose 3.3% after the lender said it would buy back up to 3 billion Swiss francs ($3 billion) of senior debt securities, making a show of strength as it seeks to reassure investors after a tumultuous week.

(Reporting by Devik Jain in Bengaluru; Editing by Savio D’Souza and Subhranshu Sahu)