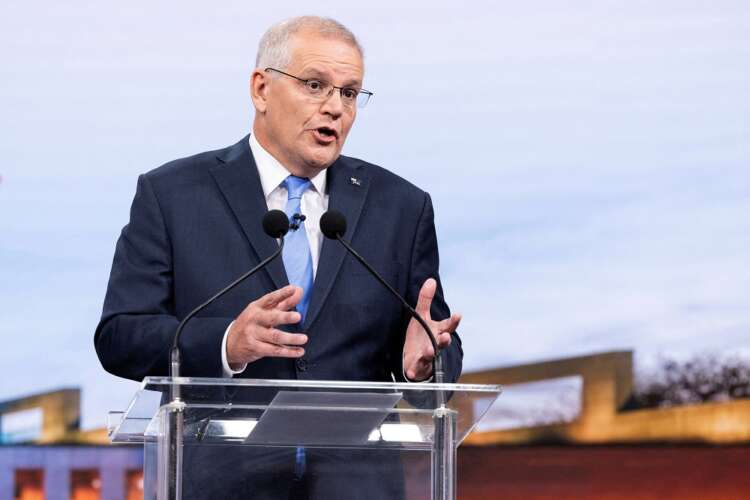 SYDNEY (Reuters) -Prime Minister Scott Morrison crisscrossed Australia in a final day of campaigning, insisting he could still win Saturday’s election despite polls pointing to a change of government or hung parliament.

Morrison and Labor opposition leader Anthony Albanese targeted marginal seats across four states in the last 48 hours of the six-week campaign as data showing wages growth being outstripped by inflation and record low unemployment gave fodder for competing claims on who would best manage the economy.

More than half the votes had already been cast by Friday evening in the compulsory voting system, with a record 8 million pre-poll and postal votes, the Australian Electoral Commission said.

An Ipsos opinion poll published by the Australian Financial Review showed Labor leading Morrison’s ruling Liberal-National coalition 53% to 47% on a two-party preferred basis, where votes are ranked by preference and distributed to the top two candidates.

But Labor’s primary vote shrunk to 36% to the coalition’s 35%, with minor parties and independents attracting nearly a third of voters, raising the prospect of a minority government.

Morrison, in a blitz of media interviews on Friday, said he could still win, and pointed to his economic competence.

Gillard, Australia’s first woman prime minister and an international campaigner for women’s leadership, urged women to vote Labor, saying, “I am very confident it will be a government for women.”

In 2010, after the election delivered a hung parliament, Gillard formed a government after extended negotiations with independents and minor parties.

Several so-called “teal independents” are challenging key Liberal-held seats, campaigning for action on climate change after some of Australia’s worst floods and fires, and criticising the government on integrity and equality.

Morrison pledged to become “inclusive and bring more people with us” if re-elected, after polling showed his personality could be a hurdle for the Liberal vote, particularly women.

Another challenge for the major parties is a A$40-million advertising blitz by billionaire Clive Palmer’s United Australia Party, which is fielding candidates nationally.

ABC election analyst Antony Green said unlike the previous election, Palmer’s advertising blitz had not singled out Labor for attack, which could affect preferences and the result.

Election rules were changed on Friday to allow telephone voting by voters who test positive for COVID-19.

The government has played up its credentials in supporting the economy through the COVID-19 pandemic, pointing to data on Thursday that showed Australia’s jobless rate fell to 3.9% in April, the lowest in 48 years.

Labor said businesses had struggled to find workers after borders were closed and highlighted other data that showed wages had grown just 2.4%, the lowest since 1998. It wants to boost the minimum wage to keep pace with inflation of 5.1%.

“Australians are doing it tough, they know that wages have gone backwards by 2.7%,” Albanese said on Friday.

Asked about the chance of no clear result on election night as independents drew votes, he urged people to vote Labor instead.