Delighted off-plan buyers in Turkey eye up another resort property 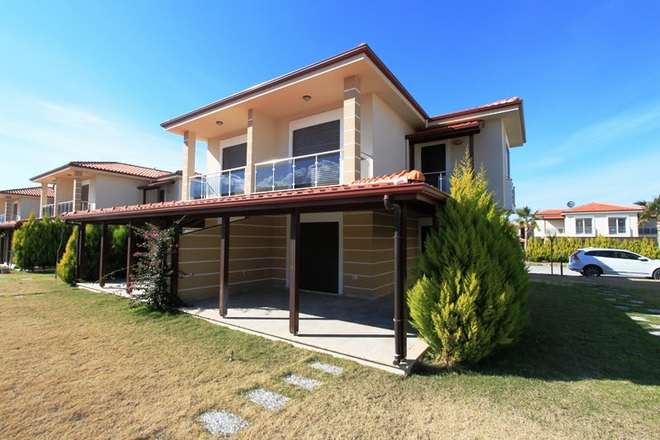 Buying a holiday home on Turkey’s Aegean Coast worked out so well for David Morris and his partner Sibel that two years after getting the keys to their villa the couple have plans for a second purchase in the same resort. David, from Manchester, and Turkish-born Sibel own a three-bedroom semi-detached villa on a gated complex near the resort of Kusadasi. They were one of the first people to invest off-plan in their development, paying a deposit of approximately £22,000 in 2015. Their property took just nine months to complete and in summer 2016 David paid the final balance, using a mortgage from the London branch of Turkish Isbank, and collected the keys. “From the moment we first met in Kusadasi until completion and beyond, the developers made us feel completely at ease,” said David, a structural engineer. “Being one of the first investors committing to their project helped us negotiate a good price. Our property cost us TRY195,000 and we paid an extra TRY25,000 for a furniture package, which included everything from kitchen appliances to mattresses and bed linen. Even outdoor furniture for the terrace was included. Overall, I have been very impressed with the deal, not to mention the build quality of our property.”

David and Sibel chose to buy in Kusadasi as it’s where Sibel’s family also own a second home. Having their own property in the resort means the couple and their two young children can spend summers there with their relatives.

“It’s great that the children are able to spend quality time somewhere nice with their Turkish family,” continued David. “We treat the property as a second home so we don’t rent it out. We’re planning to purchase another villa at the development in a couple of years, which we could let to friends and family. When I retire a few years down the line I’d like to spend half the year out there.”

David and Sibel’s property is on a development just outside the village of Davutlar, located 15 minutes south of Kusadasi and close to Paradise Beach and the Dilek Peninsula National Park. Their villa includes upstairs and downstairs bathrooms and balconies off each of the bedrooms, while outside they have a large covered terrace. With 24-hour security, communal facilities there include three swimming pools, some with water slides, landscaped gardens, play areas, and tennis and volleyball courts.

Surrounded by fruit trees and in the shadow of the Dilek Mountains, unspoiltDavutlar is famous for its natural thermal springs and clean air. Historically a popular second home destination with Turkish city dwellers, the small complexes of semi-detached houses and villas being built there are beginning to attract foreigners.

“It’s a lovely place to spend time,” concluded David. “Eating out is especially good value and enjoyable. Right now there is a wave of artisan-style restaurants opening up, where fresh meat and produce from local farmers are cooked over open coals. One has just opened five minutes’ walk from our villa – four of us recently ate there and the total bill, including wine, came to just £27.”

Spot Blue International Property has a range of property for sale in the Kusadasi area, including villas in the same development as David and Sibel’s.