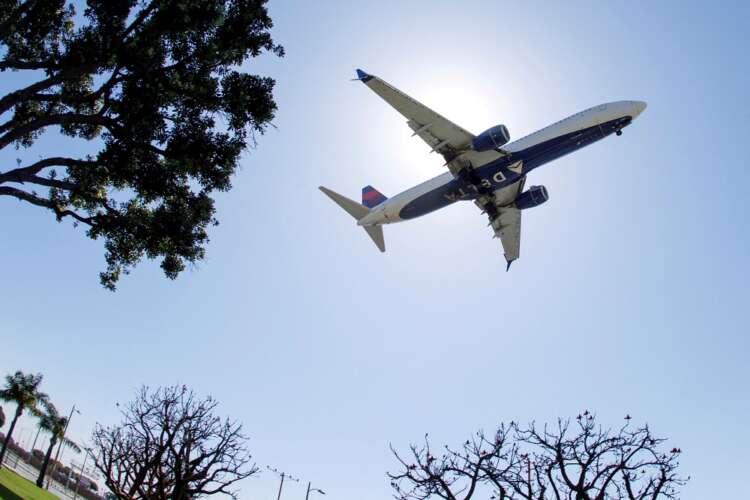 CHICAGO (Reuters) -Delta Air Lines Inc on Wednesday posted a smaller-than-expected quarterly loss and forecast returning to profit in the current quarter on the back of a booming travel demand, sending its shares higher.

The company said robust consumer demand not only helped it post a “solid” profit in the month of March, but is also allowing it to offset soaring fuel costs with higher fares.

Since it is “successfully recapturing” higher fuel prices, Delta said it expects to generate an adjusted operating margin in the range of 12% to 14% and “strong” free cash flow in the June quarter. The company estimates revenue in the current quarter would improve by about 14-18 points from a quarter ago.

“The demand environment that we have today is at a historic high,” Chief Executive Officer Ed Bastian told Reuters in an interview. “The last five weeks have been the strongest period of bookings that Delta has ever seen in our history.”

After a speed bump caused by the Omicron coronavirus variant, travel demand has roared back, with some airlines reporting the highest ticket sales in their history. U.S. passenger traffic has been averaging about 89% of the pre-pandemic levels since mid-February, according to Transportation Security Administration (TSA) data.

A run-up in fuel costs and rising wages, however, are also driving up industry’s operating expenses. Jet fuel prices in North America have gone up by more than 30% in the past month, since Western countries slapped sanctions on Russian exports.

Delta’s fuel bill in the March quarter was 33% higher than a quarter ago and is projected to increase by 15% quarter-on-quarter in the three months to end-June.

Fuel is the airline industry’s second-biggest expense after labor, but major U.S. carriers do not hedge against volatile oil prices like most European airlines. Instead, they typically look to offset fuel costs with higher fares.

Airline fares were up about 24% year-on-year in March, among the biggest contributors to a jump in U.S. consumer prices. Delta’s average fares are up about 33% from a year ago, according to data from Cowen.

Some analysts are concerned that rising fares and higher inflation could dent travel spending. Bastian said while the industry needs to watch the overall health of consumers, travel demand is expected to remain “very healthy and strong” through the summer.

“Right now, I’m optimistic that our consumers will be in a very good place to continue to travel,” Bastian said.

The Atlanta-based company’s non-fuel costs in the current quarter is forecast to be 17% higher than in the corresponding period of 2019. Its capacity is estimated to inch up to about 84% of the 2019 level.

Adjusted loss for the first quarter came in at $1.23 per share, compared with a loss of $1.27 per share estimated by analysts in a Refinitiv survey.