Why You Should Use a Mobile Banking App - and How to Make the Most of It
Our website publishes news, press releases, opinion and advertorials on various financial organizations, products and services which are commissioned from various Companies, Organizations, PR agencies, Bloggers etc. These commissioned articles are commercial in nature. This is not to be considered as financial advice and should be considered only for information purposes. It does not reflect the views or opinion of our website and is not to be considered an endorsement or a recommendation. We cannot guarantee the accuracy or applicability of any information provided with respect to your individual or personal circumstances. Please seek Professional advice from a qualified professional before making any financial decisions. We link to various third-party websites, affiliate sales networks, and to our advertising partners websites. When you view or click on certain links available on our articles, our partners may compensate us for displaying the content to you or make a purchase or fill a form. This will not incur any additional charges to you. To make things simpler for you to identity or distinguish advertised or sponsored articles or links, you may consider all articles or links hosted on our site as a commercial article placement. We will not be responsible for any loss you may suffer as a result of any omission or inaccuracy on the website. 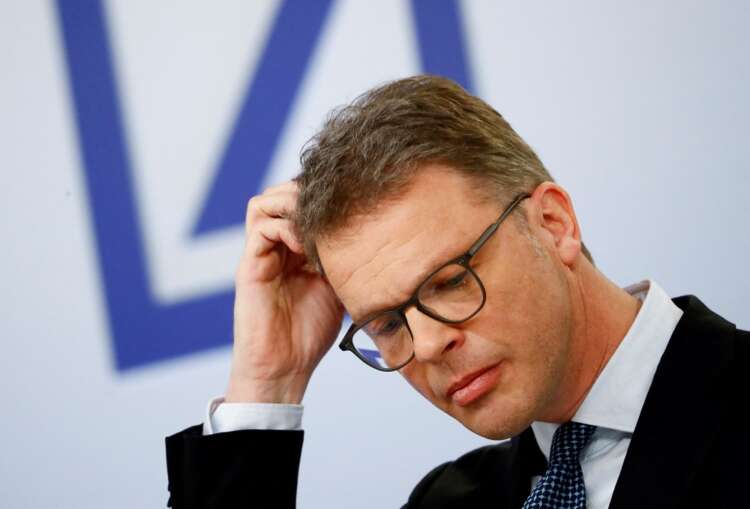 (This Dec. 16 story has been refiled to correct currency unit to cents in paragraph 33)

By Tom Sims and Marta Orosz

FRANKFURT (Reuters) – In 2019, Deutsche Bank set out on a journey to cut dependence on its volatile investment bank and rely instead on more stable businesses that serve companies and retail customers as a way to restore profitability.

It didn’t quite turn out that way.

Germany’s biggest bank is back in profit and on course to meet some key targets pledged to shareholders, but that is thanks to the investment bank.

Deutsche’s bottom line has benefited from a surge in securities trading and dealmaking â€“ the very businesses that the bank was trying to rely less on after years of scandals and fines.

A long period of low interest rates and the pandemic complicated Deutsche’s plan of making more money from the bread and butter business of lending to companies and individuals.

But the tide, buoyed by rising interest rates, is turning.

Higher interest rates are fattening profits from regular banking, while there has been a decline in M&A deals.

The bank said it is starting to see a rebalancing away from the investment bank to its other businesses.

“We do not expect that the majority of the bank’s growth between now and 2025 will come from investment banking,” board member Fabrizio Campelli said in an interview. He previously managed Deutsche’s overhaul process and now oversees the corporate division and investment bank.

The bet in 2019 was for the investment bank to make up 30% of revenues at Deutsche’s key divisions, as the company exited equities trading, with the focus more on corporate and retail banking. 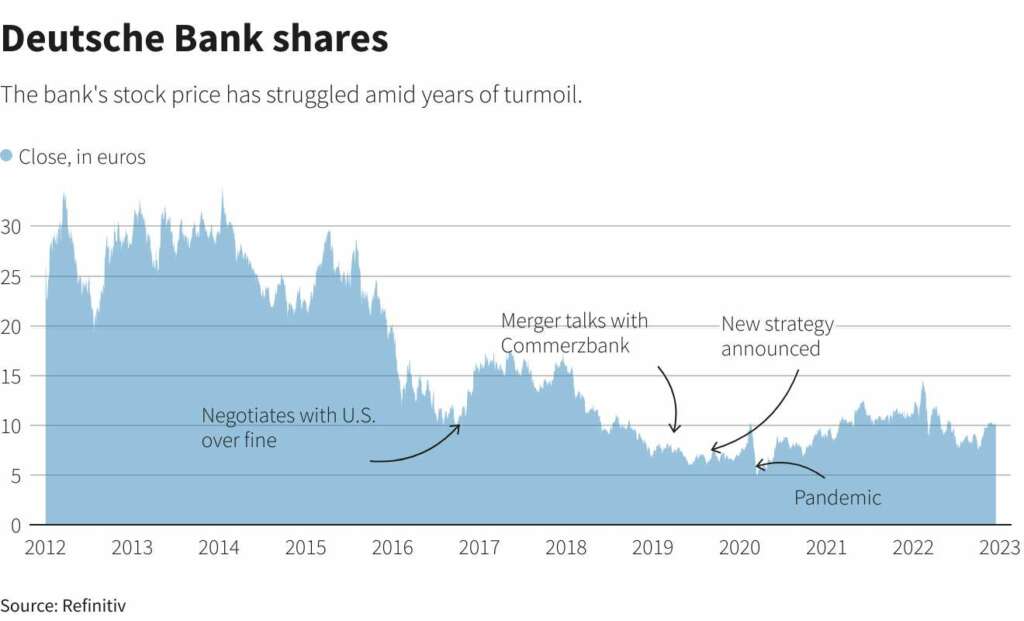 But when the pandemic hit in 2020, this created volatile markets that favoured the bank’s bond trading business, where it is one of the world’s biggest players. This made the investment bank the group’s biggest profit engine. In 2021, a wave of global dealmaking gave it another boost.

In both those years, the investment bank made close to 40% of revenue and more than 75% of pre-tax profit.

“It would have been better if the stable areas had grown more than the investment bank,” said Andreas Thomae, a portfolio manager at Deka, a big Deutsche investor.

“Overall, however, the bank is on track to earn good money on a sustainable basis. Now the stable areas have to take on a greater role again in the future,” he said.

A collapse in dealmaking this year and central banks’ moves to raise rates to combat inflation have helped Deutsche’s other divisions. Deutsche’s businesses outside the investment bank show “good momentum”, UBS said in a report this week that noted “upside potential” for the shares, which are down nearly 10% this year.

Deutsche, which ranks as one of the world’s most systemically important banks, had embarked on its four-year, nearly 9 billion euro ($9.59 billion) turnaround plan in 2019 after years of losses.

CEO Christian Sewing recalled the scale of Deutsche’s crisis at a conference last month in Berlin. “When I took over in 2018, we knew that we were in dire straits,” he said. “We knew that things had to change.”

Deutsche has hit or exceeded some of the targets in its turnaround plan as the deadline for its completion approaches with the end of 2022. 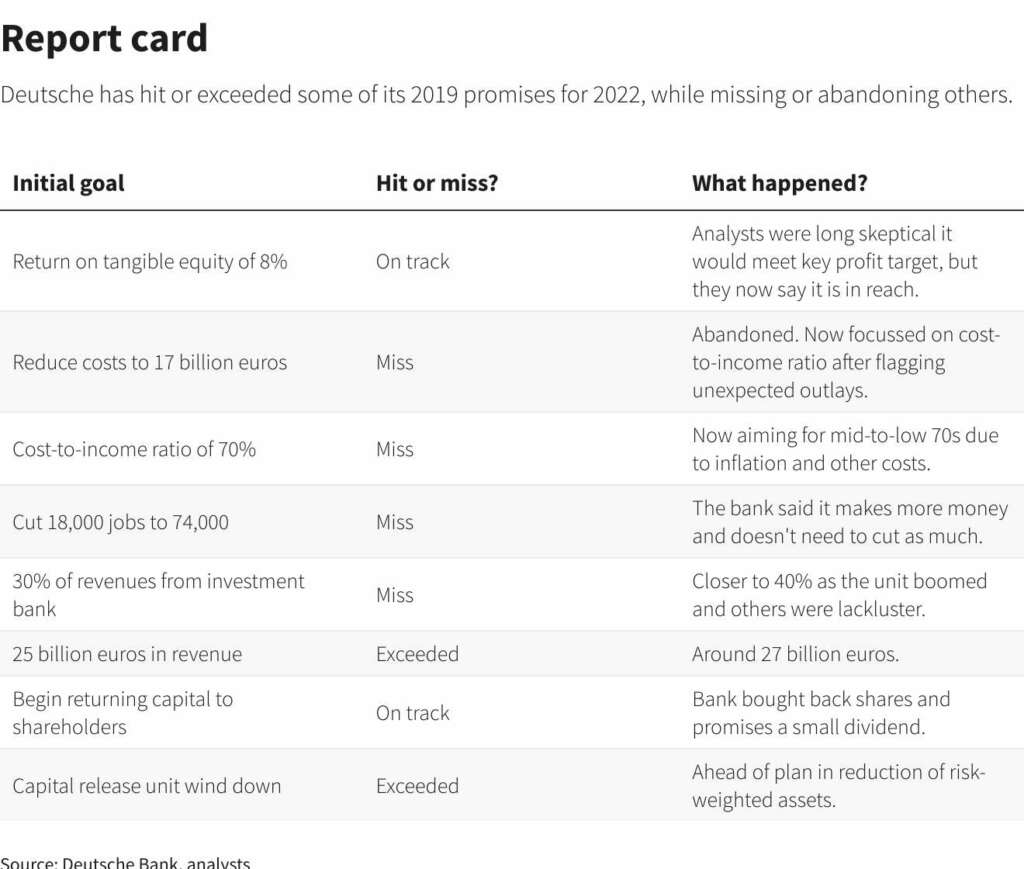 Deutsche, which lost about six billion euros over the past decade, has chalked up nine consecutive quarters of profit. 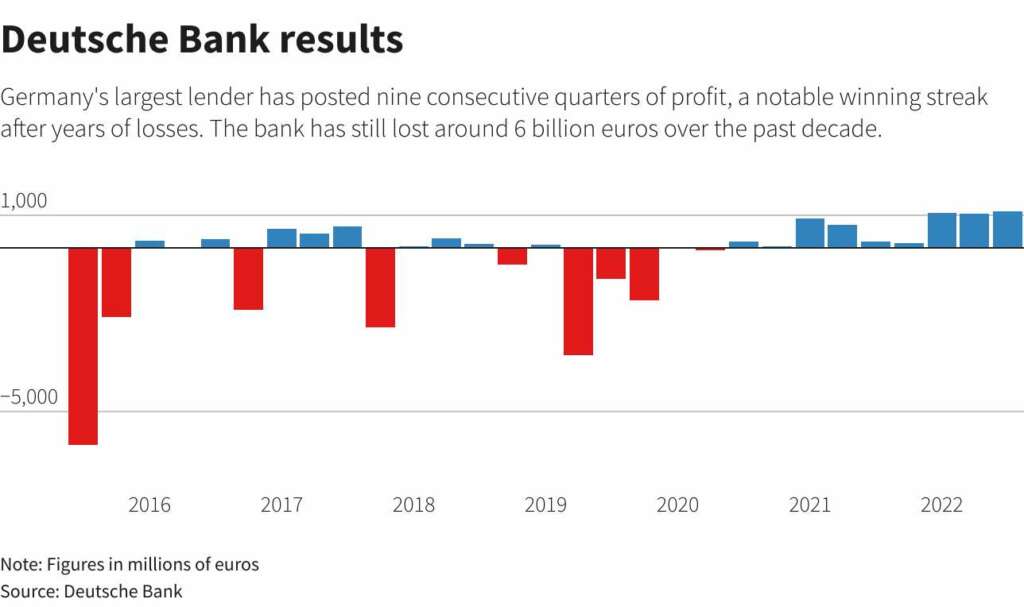 Regulators say the bank is on firmer footing than in 2016, when it became public that Deutsche would have to pay a multibillion dollar fine for its role in the U.S. mortgage crisis.

Bankers at Deutsche are relieved that for once the bank is mostly out of the headlines. They privately say they feel the pain of Swiss rival Credit Suisse, which is facing its own crisis after losses and scandals.

Ratings agencies, including Moody’s, have been upgrading Deutsche’s ratings in a sign of confidence that earnings are sustainable.

Regulatory issues have not entirely gone away. Deutsche Bank is under scrutiny for its controls to prevent money laundering, said a person with direct knowledge of the matter.

In November, Germany’s banking regulator BaFin said it had told Deutsche it would face fines if it did not meet specific measures to improve safeguards.

Deutsche said at the time that it has and will continue to invest the resources and management attention necessary to improve its controls and to meet regulatory expectations.

Deutsche’s asset management division, DWS, is under investigation by U.S. and German authorities for alleged “greenwashing”, allegations DWS has denied.

And the bank has said it would defend itself “vigorously” against allegations that it may have mis-sold risky investment bank products to customers in Spain and elsewhere, a matter the bank has investigated internally.

Deutsche Bank has also been under pressure from regulators to rein in its leveraged finance business, where credit is extended to already indebted borrowers.

Looking ahead, Deutsche has set new targets for 2025, including a cost-to-income ratio of less than 62.5%, meaning 62.5 cents spent for every euro earned.

With soaring inflation and high regulatory costs, analysts believe Deutsche will miss the goal. They predict a ratio of 69% in 2025, down from 73% this year.

For rivals JPMorgan and Goldman Sachs, analysts forecast a cost-to-income ratio of around 62% this year, based on Refinitiv data. The next phase of Deutsche’s plan comes as inflation and high energy prices take their toll on the German economy, raising questions over how its corporate and retail businesses will fare if loans turn sour.