Eager travellers line up for U.S. flights as COVID travel curbs are lifted 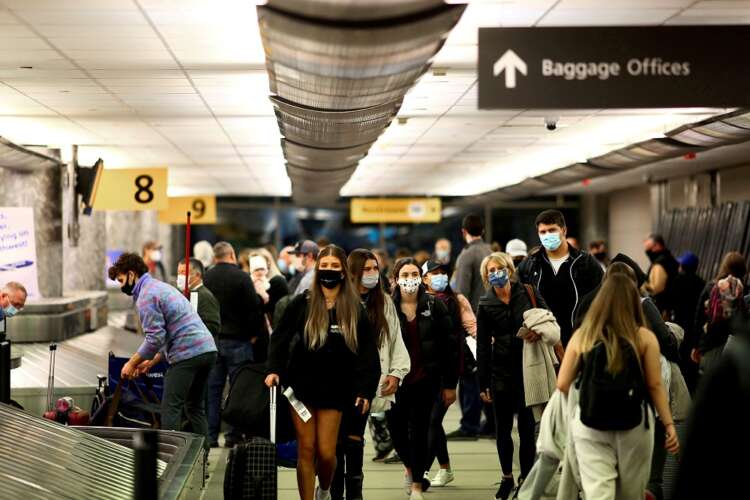 By Tara Oakes and Antony Paone

LONDON/PARIS (Reuters) -Travellers excited at the prospect of reuniting with family and friends headed for the United States on Monday as it lifted travel restrictions slapped on much of the world since the COVID-19 pandemic began.

The travel ban https://www.reuters.com/world/us/us-braces-surge-vaccinated-international-travelers-2021-11-07, first imposed in early 2020, had barred access to non-U.S. citizens travelling from 33 countries – including China, India and much of Europe – and had also restricted overland entry from Mexico and Canada.

The United States lagged many other countries in lifting the curbs, made possible by the rollout of vaccines despite rising infections in many countries, and critical to reviving tourism around the globe.

Months of pent-up demand triggered a major spike in bookings on Monday, with travellers only required to show official proof of vaccination and a recent, negative viral test.

“Really, really exciting. I mean, I was meant to go just before COVID happened, and obviously it’s been delayed this long, so it’s really exciting to finally be able to go,” Alice Keane, travelling to Miami to see her sister, said at London’s Heathrow airport.

Long-term rivals British Airways and Virgin Atlantic carried out simultaneous take-offs from Heathrow’s parallel runways just before 0900 GMT, a stunt aimed at highlighting the importance of the transatlantic market to the UK’s aviation market.

The flights were full, Virgin Atlantic CEO Shai Weiss said, while passenger volume was expected to remain high in coming weeks with the approach of Thanksgiving and Christmas.

“It’s a major day of celebration,” Weiss said, in what he called a significant tipping point for an industry brought to its knees by the pandemic.

The United States was preparing for long lines and delays on Monday, with United Airlines alone expecting about 50% more total international inbound passengers compared to last Monday when it had about 20,000.

“It’s going to be a bit sloppy at first. I can assure you, there will be lines unfortunately,” Bastian said, adding that “we’ll get it sorted out”.

The prospect of long queues did little to dent the enthusiasm of those preparing to be reunited with loved ones.

“I think we might just start crying,” Bindiya Patel, who was going to see her one-year-old nephew in New York for the first time https://www.reuters.com/world/the-great-reboot/grandmother-grandson-finally-meet-us-flights-reopen-2021-11-05, said at Heathrow, where jugglers dressed in the red, white and blue of the U.S. flag greeted travellers.

Restrictions on non-U.S. citizens were first imposed on air travellers from China in January 2020 by then-President Donald Trump and extended to dozens of other countries, without any clear metrics for how and when to lift them.

In January, Trump issued an order to lift travel restrictions on people in Europe and Brazil. But the order was reversed by President Joe Biden before it took effect.

U.S. allies had heavily lobbied the Biden administration, which had repeatedly said it did not endorse so-called “vaccine passports”, to lift the rules.

Airline officials stressed that tourism and family trips alone will not be enough for https://www.reuters.com/article/businessNews/idUSKBN2HT0JMcarriers whose profits depend on filling the most expensive seats. [L1N2RZ0LF]

Experts say the real battle of the transatlantic, the world’s most lucrative travel market, takes place at the front of the plane, in first, business, and premium economy class, where those paying the top prices help drive airline profits.

“As for business, we know the recovery is slower and so it’s a question mark but what we know is that there are a certain number of sectors, especially domestic and medium-haul travel, where recovery is already happening and we hope to see this same tendency for the United States,” said Air France-KLM commercial co-director, Henri de Peyrelongue.

In Mexico’s Ciudad Juarez, across from the Texan city of El Paso, a line of about 20 people formed early on Monday before crossing and embracing family on the other side of the border, a Reuters witness said. One of the people hadn’t seen their relatives in El Paso since March 2020.

“We thought they were going to tell us again that they had decided not to open it,” said Lorena Hernandez, stroking her grown-up daughter’s hair and smiling broadly after they were reunited in El Paso. “I said, if they don’t reopen, Iâ€™m going to take a plane.”

Some inoculated Mexicans will not be able to enter the United States immediately if they received vaccines in Mexico that have not been approved by the World Health Organization, such as China’s CanSino and Russia’s Sputnik V.

Hundreds of migrants have arrived at Mexican border cities such as Tijuana in recent days, hoping the reset will make it easier to cross and seek U.S. asylum, despite warnings from advocates that the re-opening is for people who have papers.

In Canada, long lines formed overnight at U.S. border points for an early rush of travellers but a Canadian requirement that all returning travellers have a negative PCR test is expected to dampen travel.

Canada, which allowed fully vaccinated Americans to cross the land border in August, is under pressure to drop the negative test requirement from businesses and travellers, who say showing proof of vaccination should be enough.

Under-18s are exempt from the new vaccine requirements. Non-tourist travellers from nearly 50 countries with nationwide vaccination rates of less than 10% are also eligible for exemption.