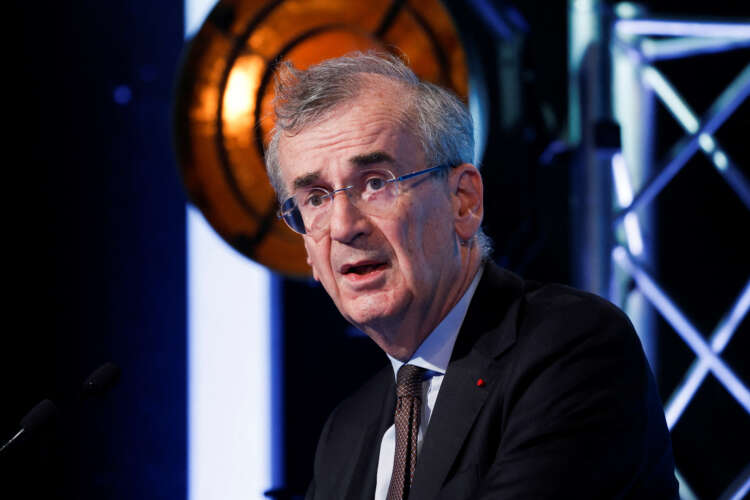 NEW YORK (Reuters) – The European Central Bank should start shrinking its balance sheet once its interest rate is close to 2%, first by getting banks to repay their loans and then by whittling down its bond holdings, ECB policymaker Francois Villeroy de Galhau said on Tuesday.

Trying to fight runaway prices, the ECB has raised its rate on bank deposits to 0.75%, promised more hikes and begun a debate about mopping up excess liquidity from the banking system – legacy of its fight against deflation in the last decade.

Villeroy said it was too early to say whether the ECB should raise that rate by 50 or 75 basis points at its Oct. 27 meeting.

But he reaffirmed the rate should be at its neutral level — or “a bit less than 2%” — before the end of the year, paving the way for the ECB to shrink its balance sheet.

“It would not be consistent to keep a very large balance sheet for too long in order to compress the term premium, whilst at the same time contemplating tightening policy rates above neutral,” the French central bank governor told an audience at Columbia University.

At that point, Villeroy said the ECB should first have banks repay money borrowed under the central bank’s Targeted Longer-Term Refinancing Operations (TLTRO).

“The reimbursement of TLTROs comes first, and we should avoid any unintended incentives to delay repayments by banks,” he said.

Then Villeroy said the ECB could begin not replacing some of the maturing bonds that it has bought under its 3.3 trillion euro ($3.20 trillion) Asset Purchase Programme during the last seven years – when inflation was too low.

“Here we could start earlier than 2024, maintaining partial reinvestments but at a gradually reduced pace,” he said.

He argued the ECB should start this unwind slowly and then accelerate, with a clearly communicated “end-point…in terms of both the terminal date and size”.