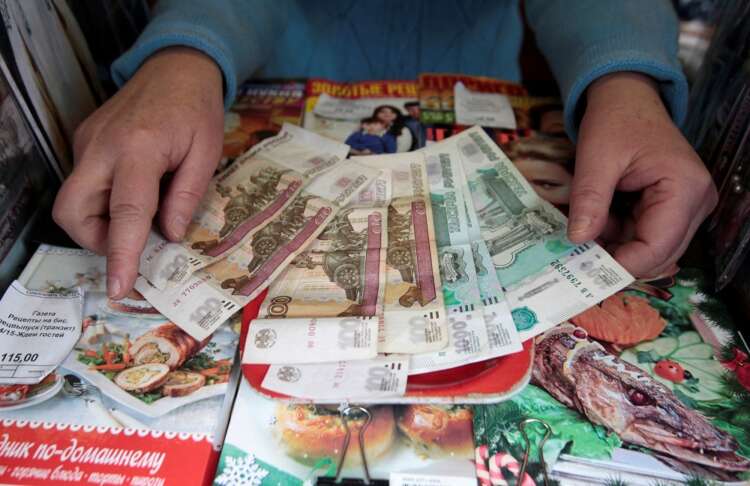 NEW YORK (Reuters) -The Russian rouble plunged and the euro nursed losses against the U.S. dollar on Monday as the West ramped up sanctions against Russia over its Ukraine invasion, prompting investors to shun riskier currencies.

Western allies have ramped up efforts to punish Russia with new sanctions including cutting off some of its banks from the SWIFT financial network and limiting Moscow’s ability to deploy its $630 billion foreign reserves and shuttering their airspace to Russian aircraft. Companies also reported divestment plans.

After plunging 30% to a record low of 120 per dollar, the rouble recovered some ground, to trade down about 24% on the day at 111 per dollar, as an emergency rate hike and other urgent measures adopted by the Russian central bank helped it trim losses.

Still, outside of the rouble the FX market reaction has been relatively stable, market participants said.

“There is clearly weakness in east European currencies even outside of the rouble… but at the same time they are not really weakening to new record lows or anything like that,” said Brad Bechtel, global head of FX at Jefferies, in New York.

Officials from Russia and Ukraine ended peace talks on Monday and will return to their respective capitals for further consultations before a second round of negotiations, RIA news agency quoted Ukrainian presidential adviser Mykhailo Podolyak as saying.

“The initial knee-jerk reaction is fading from the real extreme flight to safety that we saw at the open yesterday,” said Karl Schamotta, chief market strategist at Corpay.

One-month implied volatility on the euro, a measure of how much traders expect the currency to move against the dollar over the near term, hit a 16-month high on Monday.

General aversion to risk kept the Japanese yen and the Swiss franc well supported. With the greenback down 0.53% against the yen and 0.95% lower against the franc.

While a jump in the price of oil, one of Canada’s main exports, helped support the Canadian currency, investors’ hesitancy to take on risk kept a lid on the loonie. The Canadian dollar was up about 0.1% at 78.75 U.S. cents.

Besides geopolitical tensions, investors also remain focused on key economic data releases expected later this week, including U.S. nonfarm payrolls due Friday, that could help shape the U.S. Federal Reserve’s thinking as it gears up to raise interest rates.

Markets are now pricing in a 93% chance the U.S. Federal Reserve will hike interest rates by 25 basis points at its March meeting, according to CME’s Fedwatch tool.