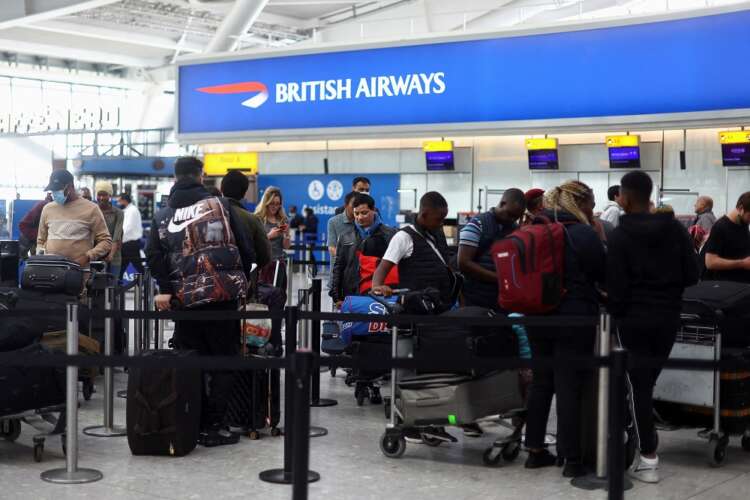 By Paul Sandle and Tim Hepher

LONDON/DUBLIN (Reuters) – European airlines and hotel chains are seeing bookings recover to levels not seen since before the COVID-19 pandemic, led by demand for shorter trips, although travellers remain cautious about making long-distance journeys.

The pandemic led to international travel virtually shutting down as governments around the world banned foreigners from entering their countries. However, the easing of restrictions and a pent-up demand to travel has sparked cautious optimism among executives.

Challenges remain in the form of rising costs and staff shortages causing flights to be cancelled. Despite that, airlines are forecasting a return to profitability.

“There is a lot of pent-up demand. People want to see their families and travel again,” said Phil Seymour, president of IBA Group, a UK-based consultancy and aircraft valuation firm.

British Airways-owner IAG expects to be profitable from the second quarter onwards and for the year as a whole, it said on Friday. That’s despite having to cut capacity in the first quarter to avoid disruptions.

“Premium leisure continues to be the strongest performing segment and business travel is at its highest level since the start of the pandemic,” said IAG Chief Executive Luis Gallego.

IAG, which also owns Iberia, Vueling and Aer Lingus, said the easing of government-imposed travel restrictions, particularly in the UK, had improved demand. It reported “no noticeable impact” from Russia’s invasion of Ukraine.

IAG forecasts passenger capacity to be around 80% of 2019 levels in the second quarter, rising to 90% by the fourth quarter. Flights between Europe and North America will be close to full capacity by the third quarter, it said.

“We are finally seeing genuine shoots of progress, with profits expected to sprout from next quarter,” said Sophie Lund-Yates, lead equity analyst at Hargreaves Lansdown.

Germany’s Lufthansa is looking to return to an operating profit this quarter as demand for travel rises with the easing of COVID-19 curbs, it said on Thursday.

Air France-KLM has seen a recovery in ticket sales and strong summer bookings, it said on Thursday.

Short-haul bookings are driving the recovery. Travellers are still wary on long-distance journeys as COVID-19 concerns linger and U.S. visitors remain cautious about planning trips to Europe because of the conflict in Ukraine.

U.S. rival Marriott International said on Wednesday it expects a key revenue metric for its U.S. and Canadian markets to hit pre-pandemic levels for the rest of the year.

Another illustration of rising demand came on Friday from Amadeus, the Spanish firm which operates the world’s largest travel booking system. It processed almost 92 million bookings during the first quarter, a little more than half the pre-pandemic levels. That was despite the spread of the COVID-19 Omicron variant hitting bookings in January.

Higher inflation and the Russia-Ukraine conflict will defer the travel recovery rather than derail it, said David Goodger, managing director of Europe and the Middle East at consultancy Tourism Economics, an Oxford Economics company.

“We expect to see domestic travel volumes in 2022 surpass 2019 levels while international travel will see a large rebound back towards that level,” he said.

The growing cost of living crisis will temper some of the travel that dominated a liberalised aviation market in recent decades as Europeans’ lifestyles spilled across borders.

“I do wonder about some of ‘city break’ type of travel,” Seymour of IBA said on the sidelines of the Airfinance Journal conference in Dublin. Such discretionary travel tends to be stimulated by direct links from budget carriers.

“I call it the Michael Buble syndrome. People used to fly to Italy for the weekend just to hear a concert. Now they might save a trip and wait for the tour to arrive closer to home.”