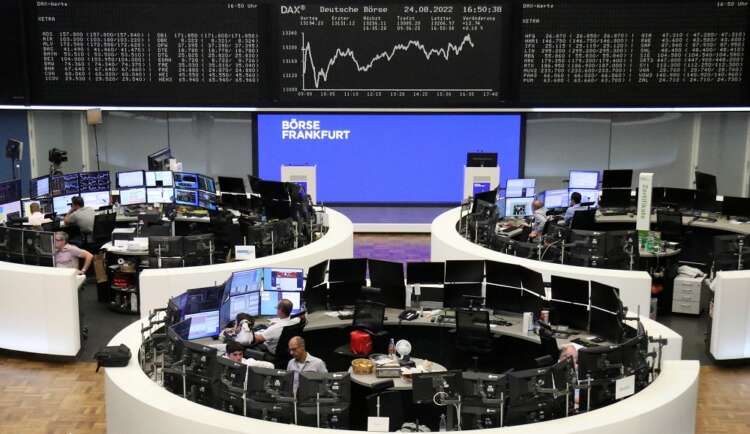 (Reuters) -European shares slipped on Friday as investors fretted over downbeat German consumer sentiment data due to rising energy costs and the path for U.S. interest rate hikes ahead of Federal Reserve Chair Jerome Powell’s speech at Jackson Hole. The pan-European STOXX 600 dipped 0.1% in choppy trade, after rising at the open. European Central Bank policymakers appeared increasingly concerned that high inflation is getting entrenched, minutes of the July 21 showed on Thursday, even as recession risks loomed. The STOXX was on pace to end the week down nearly 1% and log its second straight weekly decline. German consumer sentiment is set to hit a record low for the third month in a row in September, a new survey showed, as households brace for surging energy bills. In contrast, French consumer confidence unexpectedly rose in August. “German recession fears just became more intense with the sentiment index falling to a new record low… Germany is particularly reliant on external energy producers, and people are saving at the highest in 11 years, showing consumers are taking precautions in case of the worst case scenario,” said Sophie Lund-Yates, lead equity analyst at Hargreaves Lansdown. Elsewhere, regulator Ofgem said British energy bills will rise an eye-watering 80% to an average of 3,549 pounds ($4,188) a year from October, calling it a “crisis” that needed to be tackled by urgent government action. “Because a large increase in bills has been expected, the news avoided shocking markets, but across Europe, which has a large exposure to discretionary retailers, there could be trouble on the horizon if the situation is prolonged and as consumers look to save instead of spend, which is already playing out in Germany,” added Yates. Tech stocks rose 0.5%, after Nvidia and Amazon fuelled a rally on Wall Street ahead of Powell’s speech. [.N] Miners gained 0.9% as copper firmed on hopes that Chinese stimulus measures would boost demand. [MET/L] Among other stocks, Danish brewery Carlsberg slipped 0.6% after saying its Poland subsidiary could cut or halt beer production due to a lack of carbon dioxide deliveries. Germany’s Salzgitter Maschinenbau Group rose 0.7% after private equity firm Dymon Asia said it was buying the lifting equipment maker’s Singapore unit. Shares of Britain’s Micro Focus nearly doubled after Canada’s OpenText agreed to buy the enterprise software maker in an all-cash deal for $6 billion.

(Reporting by Anisha Sircar in Bengaluru: Editing by Sriraj Kalluvila)

Get Your Products Or Services Into The Inboxes of 35,000+ People. Here is How
Recommended

The Linkedin Influencer Marketing Bundle For Your Business But Under $100
Share on FacebookShare on TwitterShare on Linkedin
Related Topics:
Up Next

Thousands of British postal workers walk out over pay