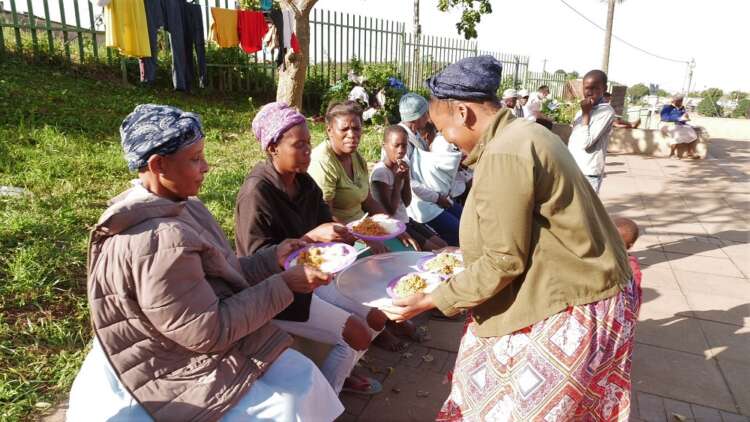 • Many victims traumatised, unable to look for work

DURBAN, May 19 (Thomson Reuters Foundation) – When Nozipho Sithole closes her eyes to sleep, she still hears the screams of her neighbour’s two young children as they were swept away by the floodwaters that killed hundreds of people in South Africa last month.

Like Sithole, many of those living in a community hall in the eastern city of Durban are haunted by what they saw, and what they lost.

Muffled sobs echo through the shelter at night, she said.

“The night the floods started, the sand looked like it was boiling from the water, the whole house was moving,” said the 35-year-old, who gave up her care job at an old-age home to look after flood survivors.

“The sand and the river swallowed up the little ones,” she said, cradling the baby of a fellow resident at the shelter in Durban’s Ntuzuma district.

The community centre has been home to about 300 people left homeless by the flooding in KwaZulu-Natal province, which killed at least 430 people, displaced thousands and caused damage estimated at 10 billion rand ($685 million).

Many are traumatised or grieving, others feel defeated and unable to start rebuilding their lives, said Nokuthula Shandu, a counsellor with medical charity Doctors Without Borders (MSF).

“Survivors are asking ‘working for what?’, what they earn won’t be enough to build a new house, they feel hopeless,” she said.

‘NO TIME TO REST’

In Ntuzuma, thin mattresses line the walls while young children wander barefoot, asking elders for pieces of toilet paper before heading to portable toilets lined up in the parking lot.

Informal settlements of shacks built from corrugated iron suffered the worst damage from the floods. Many of their residents were unemployed, struggling to scrape by in one of the world’s most unequal countries.

Three-quarters of the 340 people staying at the Ntuzuma shelter were jobless.

Others, who worked as domestic workers, bricklayers, gardeners and informal traders – lost their identity documents in the floods, making it even harder for them to find work, said Sithole.

While the provincial government did not reply to requests for comment, it has estimated that more than 6,800 people have been left homeless by the floods and said work had begun on temporary accommodation for nearly 4,400 families.

In Ntuzuma, an informal system has emerged in the shelter, led by Sithole and other women who monitor and distribute donations, ensure food gets cooked and water dispersed.

Children have formed homework clubs to work on their school work together. A church donated a Wi-Fi router in the hall so residents can get online.

To wash, shelter residents must take a bucket of water into the portable toilets.

“What we all need is a place of our own, here there is no privacy, there is no time to rest,” said Sithole, adding that they had not yet heard whether government would help displaced residents to rebuild their homes.

FIRST AID FOR THE MIND

Providing mental health services is as important as providing shelter and food aid, said Shandu, adding that people had been queuing up for counselling.

“They said that as much as they need food, we need to talk first otherwise they won’t even want to eat,” she said.

MSF has trained more than 200 community healthcare workers in KwaZulu-Natal in mental health awareness so they can refer patients to registered counsellors.

“This training came from the realisation that there just weren’t enough counsellors or social workers to get around, not even close,” said Sean Christie, an MSF spokesperson.

The medical humanitarian organisation is also training shelter leaders – like Sithole – to facilitate community support groups and inviting local musicians to play for the flood victims.

But many shelter residents said they already felt forgotten.

“It’s like we don’t exist,” said Thandeka Ndlovu, 36, as she prepared to dish out hot meals prepared in the kitchen at the Ntuzuma community hall.

She said she hoped counselling would help her and her three daughters overcome their ordeal.

“They say time heals everything,” she said. “Maybe one day we’ll be able to just see rain as rain.”

(Reporting by Kim Harrisberg @KimHarrisberg; Editing by Helen Popper. Please credit the Thomson Reuters Foundation, the charitable arm of Thomson Reuters, that covers the lives of people around the world who struggle to live freely or fairly. Visit http://news.trust.org)