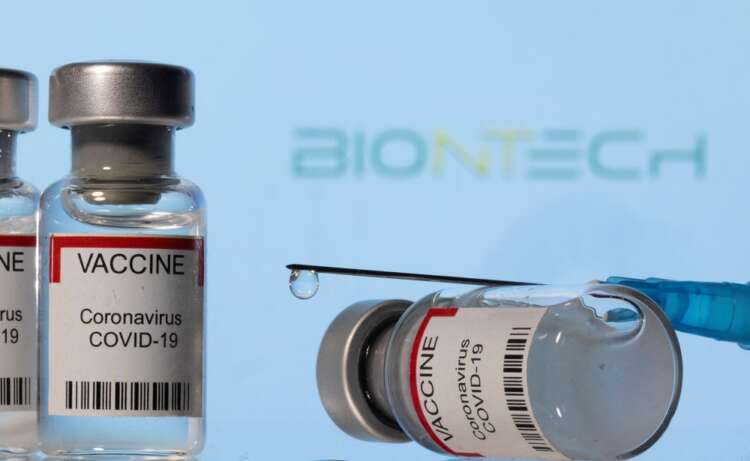 By Thomas Escritt and Alexander Ratz

BERLIN (Reuters) -Berlin has sent its first batch of BioNTech COVID-19 vaccines to China to be administered initially to German expatriates, a German government spokesperson said on Wednesday, the first foreign coronavirus vaccine to be delivered to the country.

No details were available on the timing and size of the delivery, although the spokesperson said Berlin is pushing for foreigners other than German nationals, estimated at about 20,000, to be allowed access to the shot if they want it.

The shipment comes after China agreed to allow German nationals in China to get the shot following a deal during Chancellor Olaf Scholz’s visit in Beijing last month, with the German leader pressing for Beijing to allow the shot to be made freely available to Chinese citizens as well.

In a letter to be sent to German citizens in mainland China, the government said it would offer basic immunisations and booster shots of vaccines approved for use in the European Union for free to anyone over 12 years of age.

Family members of other nationalities would not be included. Vaccinations for children under 12 may follow at a later date.

“We are working on the possibility that besides Germans also other foreigners can be vaccinated with BioNTech,” the spokesperson told journalists in Berlin.

The shots will be delivered to German companies in China as well as embassy locations and talks are underway with other EU governments about getting them to citizens of other nationalities, a source familiar with the situation said.

China would need to approve expanding access beyond German nationals, the source said.

In return, Chinese citizens in Europe can be vaccinated with China’s SinoVac, the spokesperson said.

The comment comes after a report earlier this month that Germany’s health ministry had granted a permit allowing China’s Sinovac COVID-19 vaccine to be imported to Germany to be given to Chinese citizens in that country.

The shot has not been approved for use by Europe’s drug regulator, but the World Health Organization has given its green light for its use.

Beijing has so far insisted on using only domestically produced vaccines, which are not based on the Western mRNA technology but on more traditional technologies.

The shipment comes amid Beijing dismantling its strict “zero-COVID” regime of lockdowns, which has led to a surge of cases that caught a fragile health system unprepared.

Experts predict that the country of 1.4 billion people could face more than a million COVID deaths next year.

Allowing German expats access to a Western shot is a big gesture to Berlin, reflecting Beijing’s effort to strengthen ties with EU’s biggest economy after years of tensions over trade and climate between the two countries.

Shares in BioNTech rose on news of the shipment, closing 2.3% higher in Frankfurt while Pfizer shares in New York were up 1.25% in late morning New York trade.

BioNTech was not immediately available to comment on the situation on Wednesday.

China has nine domestically developed COVID vaccines approved for use, more than any other country. But none has been updated to target the highly infectious Omicron variant, as Pfizer-BioNTech and Moderna have for boosters in many developed countries.

The two shots developed by Pfizer-BioNTech and Moderna are the most widely used around the world.

Early on in the pandemic, BioNTech struck a deal with Shanghai Fosun Pharmaceutical with a view to supply the shots to greater China.

While the shots became available in Hong Kong, Macau and Taiwan, the regulatory review for mainland China has not been concluded. BioNTech has said that decision was up to Chinese regulators and has not given a reason for the delay.

China’s zero-COVID policy and lockdown measures have kept death and infection rates minimal over the past months but caused massive disruptions both domestically and in global trade and supply chains.

China uses a narrow definition of COVID deaths and reported no new fatalities for Tuesday, even crossing one off its overall tally since the pandemic began, now at 5,241 – a fraction of the tolls of many much less populous countries.

The National Health Commission said on Tuesday only deaths caused by pneumonia and respiratory failure in patients who had the virus are classified as COVID deaths.