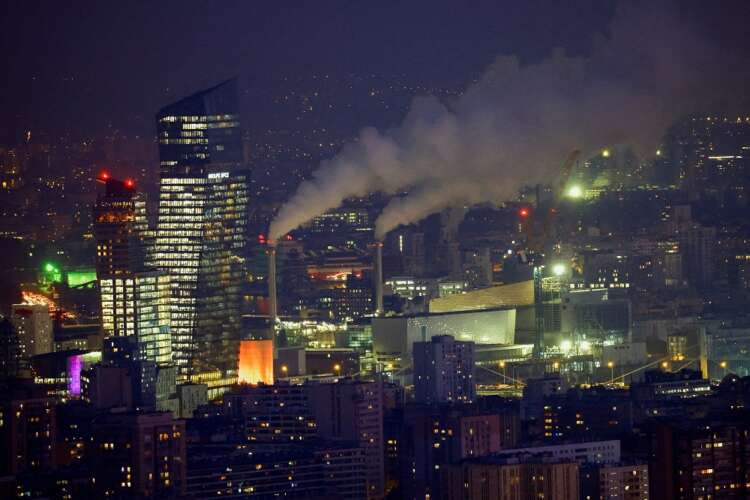 By Gus Trompiz and Forrest Crellin

PARIS (Reuters) -France expects to avoid electricity cuts on Monday but faces a difficult week as the first cold snap of the winter tests Europe’s resolve to save energy and mitigate the economic impact of the Ukraine war.

Leaders across the region have said eveyone needs to get serious about using less fuel after unusually mild weather until now had made the task relatively easy.

Although Europe’s gas storage is almost 90% full after concerted efforts following the disruption of Russian supplies linked to its invasion of Ukraine, a series of nuclear outages, especially in France, are adding to nervousness of outages.

A technical glitch briefly cut off the power in parts of Paris late on Thursday, prompting one Twitter user to ask: “Is it starting?”, while posting an image of a street in darkness.

The country is in focus as corrosion has taken a record number of reactors out of action, reducing its nuclear output to a 30-year low.

But despite concerns that supply could fall short at the start of the week as temperatures in Europe plunge, RTE grid operator said there were no planned cuts for Monday for now.

An 8.3% drop in electricity use last week will help, RTE said, adding that 41 of EDF’s nuclear reactors should be available from Monday, generating an output of 39 gigawatts, and that should be enough.

EDF said it had ramped up output at three nuclear reactors following repairs, and it hoped to start corrosion repairs at its Penly 2 nuclear reactor in mid January.

Emeric de Vigan, vice president of power at data and analytics firm Kpler said efforts by companies and households to reduce consumption should allow France to avoid imposed load-shedding on Monday but risks could increase if the cold spell persisted all next week.

Energy prices, which have hit record levels this year, surged on Friday in response to nervousness demand would outstrip supply, before easing in later trade.

France is one of the most nuclear-power dependent countries and typically generates more than 70% of its electricity from its fleet of 56 reactors as well as providing about 15% of Europe’s total power through exports.

The government, which has warned power cuts could happen this winter, said any outages would not exceed two hours and would be flagged ahead of time.

Elsewhere in Europe, Finland’s national grid operator Fingrid said the risk of power outages on winter days had increased in the country following another postponement of the start-up of the new Olkiluoto 3 nuclear power reactor.

In neighbouring Sweden, Prime Minister Ulf Kristersson told a news conference: “Many Swedes have saved electricity for purely cost reasons. Now we want to ask the Swedish people to save electricity also to reduce the risk of power cuts.”

Meanwhile, Belgium’s natural gas supply could be at risk this winter in the event of a cold wave, Belgian newspaper De Tijd reported on Friday citing a leaked government-ordered report.