G20 Summit: What you need to know now 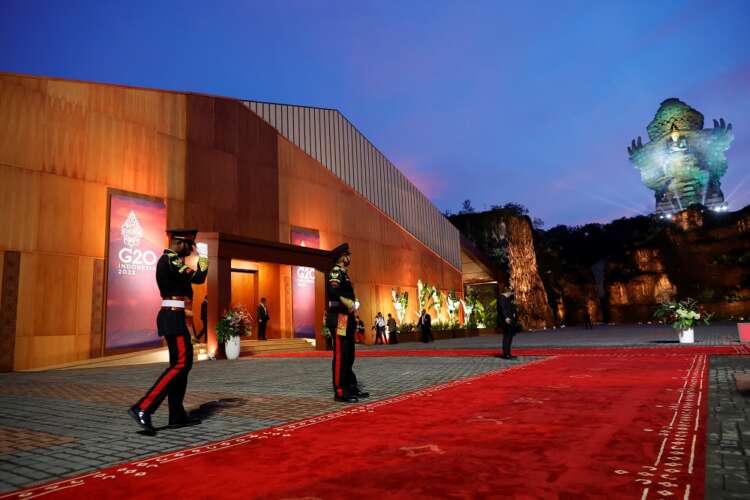 NUSA DUA, Indonesia (Reuters) – Leaders of the Group of 20 (G20) nations deplored Russia’s aggression in Ukraine “in the strongest terms” and demanded its unconditional withdrawal in a declaration adopted at the end of a two-day summit.

* The war in Ukraine was the most debated article of the leaders’ declaration, the president of host Indonesia said, while urging all sides not to escalate tension.

* French President Emmanuel Macron said G20 leaders agreed to push Russia towards de-escalation in the Ukraine conflict and expressed hope China could play a bigger mediation role in the coming months in that respect.

* U.S. Treasury Secretary Janet Yellen called for international support for Ukraine and said she wanted to acknowledge a wave of Russian missile attacks on the country.

* Russian Foreign Minister Sergei Lavrov, who headed the Russian delegation to the summit in the absence of President Vladimir Putin, condemned “politicisation” of the meeting.

* Leaders of the world’s biggest economies agreed to pace their interest rate rises carefully to avoid spillovers and warned of “increased volatility” in currency moves.

* G20 leaders agreed to pursue efforts to limit the global temperature increase to 1.5C – confirming the stand by the temperature goal from the 2015 Paris Agreement on climate change. That could boost negotiations at the U.N. COP27 climate summit in Egypt, where some negotiators feared the G20 would fail to back the 1.5C goal.

* Their declaration also said G20 countries would accelerate efforts towards the phasedown of unabated coal power. Negotiators at the COP27 summit in Egypt are wrangling over whether to expand this to phase down all fossil fuels.

* A coalition of countries including the United States and Japan announced on Tuesday they would mobilise $20 billion in public and private finance to help Indonesia shut coal power plants and bring forward the sector’s peak emissions date by seven years to 2030.

* Biden said Britain was America’s closest ally and closest friend, during his first meeting with Rishi Sunak since he became prime minister. Sunak later said he was confident Britain and the United States could deepen their economic relationship but that he had not spoken specifically about a trade deal with Biden.

* Modi discussed global and regional developments in a meeting with Biden and also exchanged courtesies with Xi at the end of a dinner in the first such meeting since deadly border clashes in 2020.

* South Korean President Yoon Suk-yeol called for China to play a bigger role in reining in North Korea’s nuclear and missile provocations, his office said, after talks with Xi.

* Australian Prime Minister Anthony Albanese and Xi signalled they would seek to move past years of disagreements after the first formal meeting between leaders of their countries since 2016. The meeting was a step to normalising ties but would not bring an Australian defence policy shift, diplomats said.