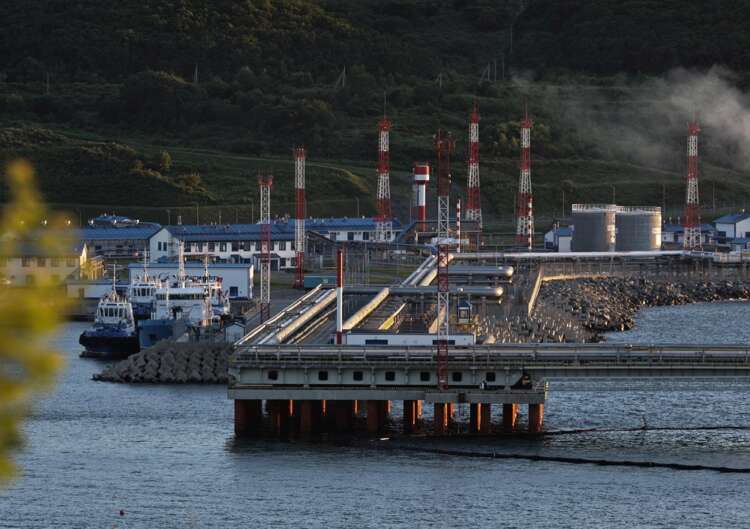 By David Lawder and Christian Kraemer

(Reuters) -Group of Seven finance ministers agreed on Friday to impose a price cap on Russian oil aimed at slashing revenues for Moscow’s war in Ukraine while avoiding price spikes, but Russia said it would halt oil sales to countries imposing it.

The ministers from the G7 wealthy democracies confirmed their commitment to the plan after a virtual meeting. They said, however, that key details, including the per-barrel level of the price cap would be determined later “based on a range of technical inputs” to be agreed by the coalition of countries implementing it.

“Today we confirm our joint political intention to finalise and implement a comprehensive prohibition of services which enable maritime transportation of Russian-origin crude oil and petroleum products globally,” the G7 ministers said.

The provision of Western-dominated maritime transportation services, including insurance and finance, would be allowed only if the Russian oil cargoes are purchased at or below the price level “determined by the broad coalition of countries adhering to and implementing the price cap.”

A senior U.S. Treasury official told reporters that the coalition would set a specific dollar price limit for Russian crude and two others for petroleum products — not discounts to global market prices — and the price level would be revisited as needed.

“This price cap on Russian oil exports is designed to reduce Putin’s revenues, closing an important source of funding for the war of aggression,” said German Finance Minister Christian Lindner, the current G7 finance chair. “At the same time, we want to curb rising global energy prices. This will minimize inflation globally.”

The Kremlin responded to the G7 statement by saying that it would stop selling oil to countries implementing the price cap, saying it would destabilize global oil markets.

“We simply will not cooperate with them on non-market principles,” Kremlin spokesman Dmitry Peskov told reporters. [nL8N3091TK]

The Treasury official said Russia would have little choice but to sell oil at reduced prices in line with the cap, because India, China and other countries outside the coalition will still want to buy oil as cheaply as possible and alternative insurance will be considerably more expensive.

“We got positive signals from other countries, but no firm commitments yet,” a senior G7 source said of efforts to recruit other countries into the coalition. “We wanted to send a signal of unity towards Russia and also countries like China.”

The G7 announcement had little effect on benchmark crude prices, which rose in anticipation of an OPEC+ discussion of output cuts on Monday amid weaker demand

The ministers said they would work to finalize the details, through their own domestic processes, aiming to align it with the start of European Union sanctions that will ban Russian oil imports into the bloc starting in December.

Enforcing the cap would rely heavily on denying London-brokered shipping insurance, which covers about 95% of the world’s tanker fleet, and finance to cargoes priced above the cap. But analysts say that alternatives can be found to circumvent the cap and market forces could render it ineffective

Despite Russia’s falling oil export volumes, its oil export revenue in June increased by $700 million from May due to prices pushed higher by its war in Ukraine, the International Energy Agency said last month.

The G7 finance ministers’ statement follows up on their leaders’ decision in June to explore the cap, a move Moscow says it will not abide by and can thwart by shipping oil to states not obeying the price ceiling.

The U.S. Treasury has raised concerns that the EU embargo could set off a scramble for alternative supplies, spiking global crude prices to as much as $140 a barrel, and it has been promoting the price cap since May as a way to keep Russian crude flowing.

Russian oil prices have risen in anticipation of the EU embargo, with Urals crude trading at an $18-to-$25 per barrel discount to benchmark Brent crude, down from a $30-to-$40 discount earlier this year.