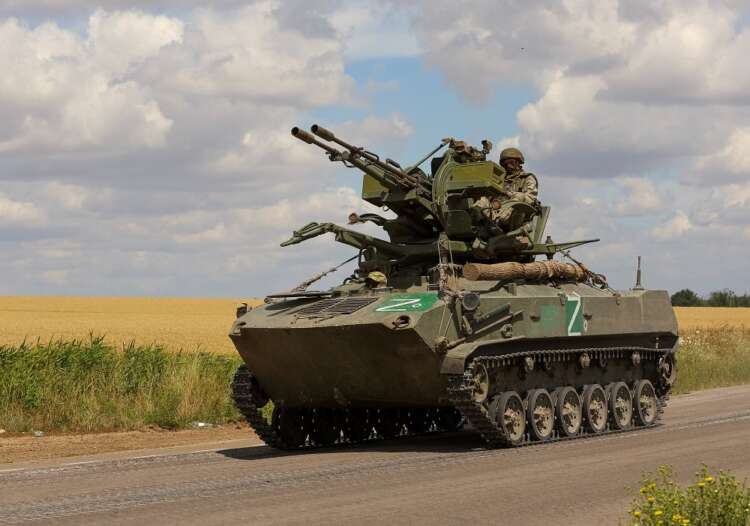 By Pavel Polityuk and Max Hunder

KYIV (Reuters) – Russia dealt a new blow to European countries over their support for Ukraine on Monday, saying it would further cut gas supplies through its single biggest gas link to Germany.

The move came as the first ships to export grain from Ukraine’s Black Sea ports under a deal agreed last week could set sail within days, bringing a measure of hope to countries reliant on such food supplies even though the situation is still clouded by mistrust and potential danger.

Both developments showed how the conflict – now in its sixth month and with no resolution in sight – is having an economic impact way beyond the battlefields of Ukraine.

On the frontlines, the Ukrainian military reported widespread Russian artillery barrages in the east overnight and said Moscow’s troops were preparing for a new assault on Bakhmut, a city in the industrial Donbas region.

Russian President Vladimir Putin warned the West earlier this month that sanctions imposed on his country for its invasion of Ukraine risked triggering huge energy price rises for consumers around the world.

On Monday, Russian energy giant Gazprom, saying it was acting under the instructions of an industry watchdog, said flows through the Nord Stream 1 pipeline would fall to 33 million cubic metres per day from Wednesday.

That is half of the current flows, which are already only 40% of normal capacity. Prior to the war Europe imported about 40% of its gas and 30% of its oil from Russia.

The Kremlin says the gas disruption is the result of maintenance issues and Western sanctions, while the European Union has accused Russia of resorting to energy blackmail.

Germany said it saw no technical reason for the latest reduction.

Politicians in Europe have repeatedly said Russia could cut off gas this winter, a step that would thrust Germany into recession and lead to soaring prices for consumers already faced with painfully high energy costs. The Kremlin has said Moscow is not interested in a complete stoppage of gas supplies to Europe.

Rising energy prices and a global wheat shortage are among the most far-reaching effects of Russia’s invasion of Ukraine. They threaten millions in poorer countries, especially in Africa and the Middle East, with hunger.

Ukraine said on Monday it hoped a U.N.-brokered deal to try to ease the food shortages by resuming grain exports from Black Sea ports would start to be implemented this week.

Officials from Russia, Turkey, Ukraine and the United Nations agreed on Friday there would be no attacks on merchant ships moving through the Black Sea to Turkey’s Bosphorus Strait and on to markets.

Moscow brushed aside concerns the deal could be derailed by a Russian missile strike on Ukraine’s port of Odesa on Saturday, saying it targeted only military infrastructure.

Moscow denies responsibility for the food crisis, blaming Western sanctions for slowing its food and fertiliser exports and Ukraine for mining the approaches to its ports.

Under Friday’s deal, pilots will guide ships along safe channels.

A Ukrainian government official said he hoped the first grain shipment from Ukraine could be made from Chornomorsk this week, with shipments from other ports within two weeks.

“We believe that over the next 24 hours, we will be ready to work to resume exports from our ports,” deputy infrastructure minister Yuriy Vaskov told a news conference.

A United Nations spokesperson, speaking in New York, said the first ships may move within a few days. A Joint Coordination Center will liaise with the shipping industry and publish detailed procedures for ships in the near future, he said.

Russian Foreign Minister Sergei Lavrov, speaking during a tour of African countries, said there were no barriers to the export of grain and nothing in the deal prevented Moscow from attacking military infrastructure in Ukraine.

The Kremlin also said the United Nations must ensure curbs on Russian fertiliser and other exports were lifted for the grain deal to work.

Before the invasion and subsequent sanctions, Russia and Ukraine accounted for nearly a third of global wheat exports.

Putin calls the war a “special military operation” aimed at demilitarising Ukraine and rooting out dangerous nationalists who he says threaten Russia’s security. The Kyiv government and the West call this a baseless pretext for an aggressive land grab.

Thousands of people – many of them civilians – have been killed and several million people have fled their homes for safer parts of Ukraine or overseas.

Russian artillery barrages and air strikes have pulverised whole cities. With Western weapons supplies boosting the Ukrainians, Putin’s forces are making slow progress but they are believed to be readying for a new push in the east.

Ukraine’s General Staff said in its evening report on Monday Russia war planes had struck at targets in Donetsk province, including near the Vuhlegirska thermal power station.

Reuters could not independently verify the Russian or Ukrainian statements.