Historic M&A activity will peak in 2022 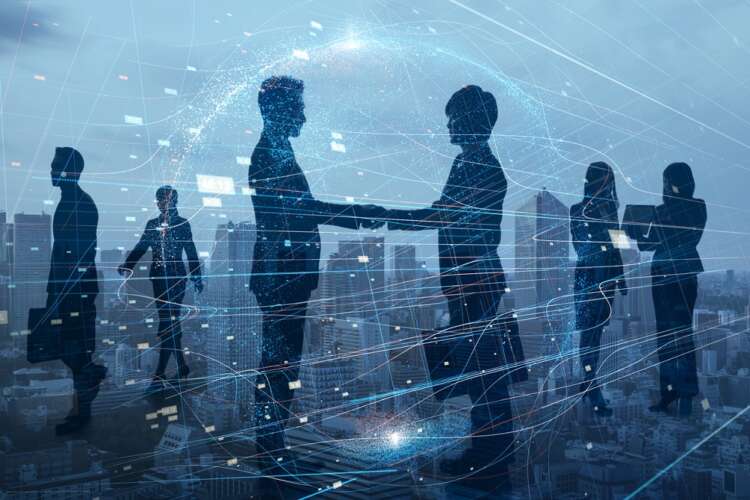 2021 was a record year for M&A in a number of ways, with over 50,000 deals totaling over $5 trillion in value. Cross-border, tech, and private equity-backed deals made up outsized shares of these huge sums, and 2022 will see similar trends and volume. However, it may fall short of setting a new record as the appetite for mega mergers subsides and the global financial environment returns to pre-pandemic conditions.

The cause of all this activity is what we are calling the Great Acceleration: a trend matched in scope only by the Great Resignation, to which it is intimately connected.

The Great Acceleration is something we all encounter on a daily basis. The pressure of the pandemic led to an enormous shift in the global work environment as it became almost entirely remote. This necessitated a sudden and massive acceleration in the deployment of work-from-home and other tech infrastructure.

Demand exploded for remote monitoring and administration in manufacturing, IT, retail and a hundred other industries. Online retail, already growing fast, saw unprecedented gains as it became nearly the sole shopping method for billions.

Companies of all sizes, from Etsy shops to multinational corporations, suddenly found that the cutting-edge tech they’d been thinking about adopting had become mission-critical almost overnight. Such rapid scaling might not have been possible a few years earlier, but the new generation of cloud-based services had been preparing for a rush of this magnitude.

In 2020 everyone scrambled to get their feet under them, and in 2021 those efforts paid off in rising revenues and valuations. Larger tech companies acquired smaller ones showing the strongest growth, while legacy and non-tech industries made crossover deals with tech targets to accelerate their own digital transformation.

Tech deals on the rise

As a result, tech-related M&A accounted for $1 trillion of the total: a new high-water mark for the sector. Part of this record was due to the need for companies to move quickly and adopt technology that they could not possibly develop themselves in time. It made sense to own rather than license, either for financial or competitive reasons.

A domino effect also is created when one company in an active space decides to acquire the provider of a key service, like payments or database management. This prompts others, who may have been meditating the same move (and perhaps the same target) to do the same for fear of losing out on the next evolution of the market. Since digital transformation is a crucial and one-way process, many opted to buy outright to own the innovation they were taking part in.

That innovation has accelerated as well. Ideas and businesses that may not have seemed realistic five years ago began to make sense and even seem highly prescient – making these companies, often early-stage startups, perfect targets for a forward-thinking enterprise. Even highly traditional corporations made these kinds of investments, increasing the surface area for deals to take place in.

Private equity spins its own flywheel

Private equity-backed deals made up a large proportion of that record $5 trillion, also crossing the $1 trillion mark for the first time ever. This was driven by a few trends.

First, PE simply had the money: with some $2 trillion in readily available capital earmarked for exactly this kind of activity, these firms were ready to move when the opportunity presented itself. With global corporates sniffing around the same targets and timelines shortened by pandemic pressure, there was no time or appetite for extended negotiations. But PEs have gained the sector expertise and well-honed deal processes needed to accomplish quick, accurate valuations and speedy dealmaking in the tech sector.

This contributed to the second trend, which was strong valuations and growth in general, spurring increased M&A activity. Such feedback loops are not sustainable over the long term, of course, but certainly for 2021 it was true that growth drove acquisitions, and acquisitions drove growth.

Third is the PE strategy of aligning with themes to build deeper expertise and synergies among their portfolios. Tech has naturally become a popular such theme, adding to the flywheel in that corner of the broader market. It was an auspicious time to specialize in tech, since the sector has shown remarkable growth during a period of uncertainty and unpredictable activity. PE firms had positioned themselves appropriately to capitalize on it.

We’re not finished yet

Looking forward, the trends defining 2021 will continue into the new year, partly because they simply have not run themselves out. By no means is the Great Acceleration complete; in many ways it is just getting started. It’s become more than clear that the changes made in 2021 are here to stay, and any company that hedged its bets will likely take the plunge this year into a deeper digital transformation.

It’s not just the normalization of video calls, something that no one even questions anymore – though how to do these both securely and conveniently is an important new part of the enterprise economy. So many other things also now have to be done remotely: recruitment, R&D, sales, HR, IT. Every aspect of a business that once had its own section of the building is being spread across dozens, perhaps thousands of homes and individuals. How can you run a company without the beating heart that defined the last century of business: the office?

The answer to that question is still being formed, and 2022 will see the bets made in 2021 playing out and more conservative players putting their chips down as well. That includes the sleeping giants of legacy industries like oil and gas, automotive, and infrastructure, many of which have only made tentative efforts towards the comprehensive digitization that fast-moving sectors have already undertaken. Cross-border deals will also grow as tech, itself fundamentally international, intersects with globe-spanning industries.

Part of that will be these companies simply learning to make deals via the remote operations, something not every leader or company is comfortable with but is clearly an essential skill going forward.

Private equity deals will continue to thrive as well, as long as they continue to pay off – perhaps a self-evident statement, but the trend will wear itself out in time. Although we are still in a period of optimism and activity, the threat of conservatism is visible on the horizon.

One factor here is that the pandemic has lasted much longer than most expected. In some ways this has driven growth, but what was considered at first to be a crisis of limited duration is turning out to be interminable: a new status quo. That means there’s no hurry except where competitive pressure is being exerted.

This conservatism will likely be a top-down process: leaders will exercise more caution in evaluating the risks of any “bet the company” type mega-deal. Outside the existential threats faced over 2020 and 2021, the enormous financial outlay and potential for company-wide culture and organizational issues will be given heavier consideration.

Less friction will be felt in the middle market deals and tuck-ins, which may even see further increases, as the slow-rolling of big mergers frees up capital for more immediate and easily justifiable targets like startups.

Central banks worldwide have signaled their intention to raise interest rates, now that we have entered a period of greater certainty, and due to rising inflation. This will raise the cost of debt capital and make optimum conditions for acquisitions scarcer.

For PE in particular there is always the threat of a public market correction that affects the short-term growth and high valuations that have made their themed investments such excellent performers. A serious correction would chill PE firms a bit and slow the rate of dealmaking.

Whether 2022 will meet or exceed 2021’s records is an open question, but it will still be a huge year for M&A even if it doesn’t break new ground. 1H22 activity is already trending very high, and looking at the road ahead there are no obvious speed bumps. Perhaps the market will lift its foot off the gas a bit, but only because it would be hard to travel much faster than we’re already going.

Gregory Bedrosian co-founded Drake Star in 2004 (then Redwood Capital Group in the US) and is responsible for the day-to-day management of the firm on a global basis. Gregory is a veteran investment banker whose experience spans both domestic and cross-border M&A and private equity transactions across the US, Europe, and emerging markets. Amongst his numerous honors, Gregory received the 2021 Global M&A Leadership Award, the 2016 M&A Advisor Leadership Award and is an M&A Advisor Hall of Fame inductee

Allowing yourself time to grow as a leader, consciously, will enable you to support your team authentically