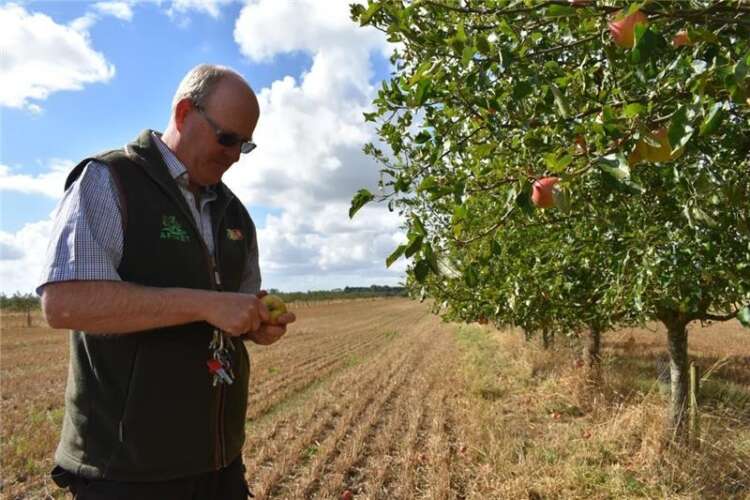 “Those are ready,” he said, looking at a nearby apple tree, one of 4,500 planted in neat rows through wheat fields on his farm near Peterborough, in eastern England.

The wheat had been harvested a couple of weeks earlier, but Briggs welcomed the added work of apple picking – and the extra income it provides.

He is among a small group in Britain working to revive the ancient practice of agroforestry, or growing trees on the same piece of land as field crops or livestock pasture for economic and ecological benefit.

The farming method all but disappeared in Britain in the wake of World War Two, when the government, under pressure to feed a rapidly growing population, paid food producers to switch to single-crop farming methods.

But agriculture experts say it is poised to make a comeback as part of the government’s tree-planting campaign to help meet its climate target of net–zero carbon emissions by 2050.

“Nature doesn’t do monoculture,” said Briggs, an early adopter of the practice who is advising the government on agroforestry standards.

“We’re taking some of the best practices of forestry and mixing them with agriculture to embed diversity, to be resilient, but in a way that we can still manage.”

In a report released this week, the Woodland Trust, a British conservation charity, said planting 30% of British grass pastureland with trees could produce net–zero carbon emissions from pasture-raised livestock by 2050.

About 70% of the country’s total area is agricultural land, but currently only a little more than 3% of British land is used for some form of agroforestry, according to Paul Burgess, an agroforestry professor at England’s Cranfield University.

In its 2020 report, the government’s Committee on Climate Change recommended increasing the area of farmland that incorporates trees to 10%, saying it could cut planet-warming emissions by six metric tons per year by 2050.

But even proponents of agroforestry say making the practice more widespread will not be easy – not least because there is a lack of available trees to plant.

“If agroforestry was to take off at the level that we would all like to see, we don’t have the tree supply (nationally),” said Helen Chesshire, lead farming advocate for the Woodland Trust, which gives grants to farmers to plant trees.

“Currently, we have a bottleneck.”

Farming with trees in a multi-crop system is not a new idea. People have used the technique for thousands of years, including on the British Isles, and it is still the method of choice on vast swathes of the planet.

Farmers and other agricultural experts say agroforestry boosts biodiversity, aiding vital pollinators like bees and birds, while reducing instances of pest and disease infestation for both plant crops and livestock.

For instance, spreading fruit or nut trees throughout a crop field, rather than grouping them together in an orchard, makes it harder for disease to jump from tree to tree.

The practice also slows land degradation as trees store nutrients and water in the ground and protect soil against wind erosion, as well as buffering crops against flooding.

All can help counter the effects of rising temperatures and intensifying drought, experts say.

Despite the benefits of multi-crop systems, a range of European and UK agricultural policies, starting in 1962, incentivised farmers to clear trees to grow more monocrops, said Briggs, the Cambridgeshire farmer.

That created “a chasm” between agriculture and forestry, he said, which over the past decade a coalition of farmers, ecologists and nonprofits have been lobbying the British government to close.

Since the United Kingdom left the European Union in 2020, all four of its national governments have announced the development of agroforestry standards and payment programmes to encourage more trees on farms.

“The government now seems to at least accept that trees on farms are no longer an issue, that they are part of the farming system,” said Chesshire of the Woodland Trust.

‘CHANGE IS A CHALLENGE’

Tackling the country’s tree shortage will take time, said Chesshire, noting that the trees should be cultivated domestically to avoid importing invasive species or diseases that could risk the entire system.

The next step, supporters say, is raising basic awareness of agroforestry techniques.

“People make the mistake … of assuming that farmers are foresters, and they aren’t. Change is a challenge for them,” said David Brass, CEO of The Lakes Free Range Egg Company in Cumbria.

The Lakes sources eggs from more than 70 farms and requires all of its producers to have 20% of the area their hens range in covered in trees, Brass explained.

The company provides initial payments to many reluctant farmers to plant trees and pays a “significant premium” for ongoing maintenance, he said.

On his own farm, Brass said his investment paid for itself within the first two years. Hen mortality dropped and egg quality increased.

As descendants of jungle fowl, chickens are happier and more secure among trees, he said, adding that trees also shield the animals from increasingly extreme temperatures.

TIME FOR A REVIVAL

Another challenge farmers face when looking to move into agroforestry is time. Trees can take anywhere from five to 70 years to mature, depending on the species.

“Asking tenant (farmers) to invest in trees if they have a five-year tenancy and apples take beyond five years to get anywhere near a return is problematic,” said Matthew Heard, an ecologist in charge of environmental research at the National Trust, Britain’s largest private landowner.

“That’s where stepping up as a landlord is really important.”

In addition to adjusting lease terms so landlords offer longer tenancies, farmers also want the government to extend its sustainable farming payment scheme from covering three years at a stretch to eight years, in light of the multi-year financial risk they take until trees are established.

For all the challenges, agroforestry advocates say the boost for food security and economic productivity, as well as the environmental benefits, far outweigh the costs.

On his farm, Briggs pointed to a petrified tree trunk on the edge of a field.

“Before we farmed the area, there were trees here,” he said. “We have to put trees back into the landscape in a way we can manage. This is what the land returns to.”