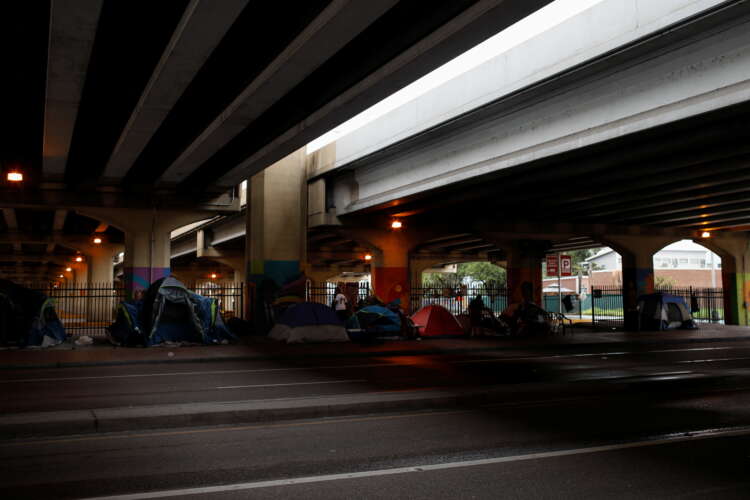 NEW ORLEANS (Reuters) -Hurricane Ida plowed into Louisiana from the Gulf of Mexico as a fierce Category 4 storm on Sunday, lashing the coast with 150 mile-per-hour winds, torrential downpours and pounding surf that submerged much of the shoreline under several feet of water.

Power was knocked out Sunday night to the entire New Orleans metropolitan area with the failure of all eight transmission lines that deliver electricity to Louisiana’s largest city, the utility company Entergy Louisiana reported.

One transmission tower collapsed into the Mississippi River, according to the Jefferson Parish Emergency Management Department.

Ida slammed ashore around noon near Port Fourchon, Louisiana, a hub of the Gulf’s offshore energy industry, blasting the coast with hurricane-force winds extending 50 miles (80 km) out from the eye of the storm. Landfall came 16 years to the day after Hurricane Katrina, one of the most catastrophic on record, struck the Gulf Coast.

Sunday night, the sheriff’s office in Ascension Parish reported the first known U.S. fatality from the storm – a 60-year-old man killed by a tree falling on his home near Baton Rouge, the state capital.

Flash flooding was reported by the National Hurricane Center across southeastern Louisiana. Nearly all offshore Gulf oil production was suspended, and major ports along the Louisiana and Mississippi coasts were closed to shipping.

Residents of the most vulnerable coastal areas were ordered to evacuate days in advance of Ida. Those riding out the storm in their homes in New Orleans, less than 100 miles inland to the north, braced for the toughest test yet of major upgrades to a levee system https://www.reuters.com/world/us/new-orleans-levees-got-145-billion-upgrade-will-they-hold-2021-08-30 constructed following devastating floods in 2005 from Katrina.

“I almost found myself in a panic attack when news announced this was the anniversary of Katrina,” Janet Rucker, a lifelong New Orleans resident and recently retired sales manager who took shelter in a downtown hotel with her dog, Deuce. “This is just not good for our nerves and our psyche.”

The storm’s approach forced the suspension of emergency medical services in New Orleans and elsewhere across a state already reeling from a fourth wave of COVID-19 infections that has strained Louisiana’s healthcare system.

For an estimated 2,450 COVID-19 patients hospitalized statewide, many in intensive care units, evacuation was not an option.

A loss of generator power at the Thibodaux Regional Health System hospital in Lafourche Parish, southwest of New Orleans, forced medical workers to manually assist respirator patients with breathing while they were moved to another floor, the state Health Department confirmed to Reuters.

Farren Clark, a Nicholls State University professor who studied Katrina’s impact and was riding out the storm at his mother’s home in Thibodaux, called the arrival of Ida “nerve-wracking.”

“I can hear the howl of the storm getting stronger,” he told Reuters by phone. “Having done research on Katrina, it is a little bit triggering.”

Michael Lewis, 45, restaurant owner in nearby Houma, said he could see shingles blown off his roof and a downed fence through a window of his home but was unable to check the full extent of damage as the storm raged.

“It’s way too dangerous to go outside right now,” he said in a phone interview.

Officials of the U.S. Army Corps of Engineers said they expected the city’s newly reinforced levees to hold, though they said they said the flood walls could be overtopped in some places.

“This is one of the strongest storms to make landfall here in modern times,” Louisiana Governor John Bel Edwards said at a news briefing.

Hundreds of miles of new levees were built around New Orleans after flooding from Katrina inundated much of the low-lying city, especially historically Black neighborhoods. That monster storm claimed more than 1,800 lives.

Edwards voiced confidence in the $14.5 billion in levee improvements since then, saying they were “built for this moment.”

Power outages were widespread in the first hours of the storm, with more than 1 million Louisiana homes and businesses losing electricity by late Sunday night, according to the tracking site Poweroutage.US.

Just three days after emerging as a tropical storm in the Caribbean Sea, Ida had intensified into a Category 4 hurricane and swept ashore with top sustained winds of 150 miles per hour (240 km per hour), the National Hurricane Center (NHC) reported.

As Ida pushed inland past to New Orleans over the next 10 hours, its maximum sustained winds diminished to 105 mph, ranking it as a Category 1 storm on the five-step Saffir-Simpson hurricane wind scale, according to the NHC.

Palm trees trembled as rain blasted in sideways through New Orleans on Sunday, where retiree Robert Ruffin, 68, had evacuated with his family to a downtown hotel.

“I thought it was safer,” he said. “It’s double-trouble this time because of COVID.”

Inundation from Ida’s storm surge – high surf driven by the hurricane’s winds – was reported to be exceeding predicted levels of 6 feet (1.8 m) along parts of the coast. Videos posted on social media showed storm surge flooding had transformed sections of Highway 90 along the Louisiana and Mississippi coast into a choppy river.

The NHC also warned of potentially catastrophic wind damage and up to 2 feet (61 cm) of rainfall in some areas.

“We’re as prepared as we can be, but we’re worried about those levees,” said Kirk Lepine, president of Plaquemines Parish, and one of the most vulnerable areas along Gulf Coast.

The parish later issued an alert on Facebook urging residents of one area to seek higher ground after reports of an overtopped levee.

Offshore energy operations in the region were at a virtual standstill. The Bureau of Safety and Environmental Enforcement (BSEE) said nearly 300 offshore oil and gas platforms were evacuated, cutting Gulf-based petroleum and natural gas production by 96% and 94%, respectively.