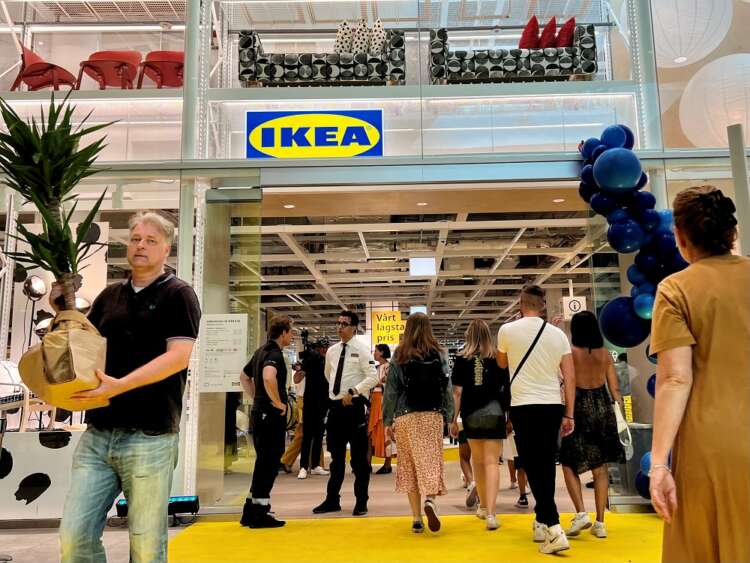 STOCKHOLM (Reuters) -Budget furniture giant IKEA reported record high annual sales on Thursday as price hikes and easing effects from the pandemic made up for supply shortages, weakening consumer confidence and its exit from Russia.

Inter IKEA, franchiser for the world’s biggest home furnishing brand, said sales at all IKEA stores and online grew 6.5% in the 12 months through August, or 3.5% measured in local currencies, to 44.6 billion euros ($43.3 billion).

“Inflation and supply chain issues impacted FY22 sales, and led to rising costs and higher prices. That means sales have grown in money, but sales quantities have not kept up,” Inter IKEA said in a statement.

“In addition, supply chain shortages made it difficult to keep IKEA shelves full,” it said.

Inter IKEA CEO Jon Abrahamsson said in an interview retailers’ sales volumes had not increased during the year. He added that Inter IKEA had not passed on all input cost increases to the retailers, but had assumed some itself.

Ingka Group, which owns the bulk of stores including those in main market Europe, and the closed ones in Russia, said separately its sales rose 5.6%, or 2.2% in local currencies, to 39.5 billion euros.

The group said in a statement sales grew in most of its markets and availability of products improved overall.

Ingka CEO Jesper Brodin, who in March said price hikes would average 12% in the fiscal year amid soaring raw material costs and supply chain disruptions, said on Thursday Ingka had been able to start lowering prices again this summer as stocks started filling up thanks to recovering supply chains.

Brodin said sales growth improved too towards the end of the year, to double-digit figures, and that so far in the new fiscal year, demand remained “incredibly strong” despite an overall drop in consumer confidence due to the energy crisis, soaring cost inflation and the war in Ukraine.

“But we have deep respect for the year we are in …and we are prepared for a tough winter for people everywhere.”

He said product prices would continue to be adjusted depending on availability in specific markets.

Ingka was also in the process of opening a “store-in-store” that offers IKEA’s products to help households reduce water and energy consumption – such as led lighting, solar panels and battery chargers, alongside advice on how to reduce energy bills.

IKEA in March paused operations in Russia, which last year accounted for more than 4% of Ingka’s sales.

Inter IKEA in June put its factories in the country up for sale, and IKEA stores remain closed, but Ingka’s shopping malls remain open. Brodin said on Thursday Ingka had not yet decided whether to sell the IKEA stores.