Macron, Scholz plaster over differences with smiles and a handshake 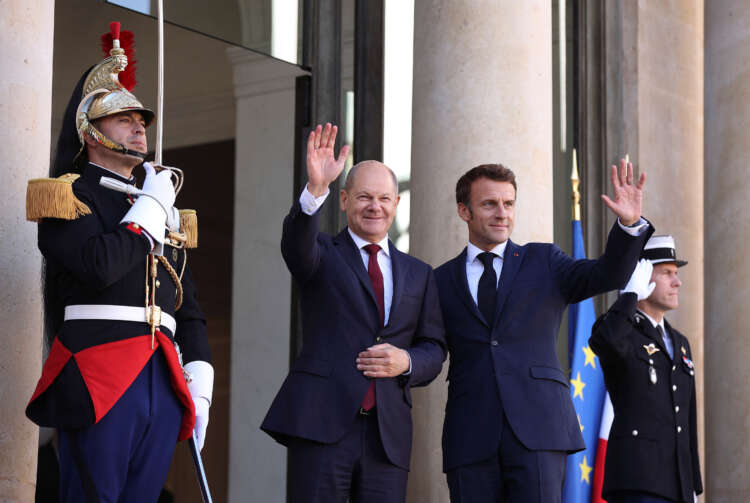 PARIS (Reuters) – French President Emmanuel Macron and German Chancellor Olaf Scholz met in Paris with smiles and a handshake on Wednesday, but ignored questions on their faltering relationship as they headed into the Elysee Palace.

Scholz flew into the French capital for a hastily scheduled working lunch to find common ground after the French leader postponed a joint Cabinet meeting last week over what sources said were differences, including over energy policy and defence.

After the talks, Scholz said the two leaders had a “very good and important conversation” that covered European energy supplies, rising prices and joint defence projects.

“Germany and France stand close together and are tackling challenges together,” he said in a tweet.

The Elysee Palace issued a statement saying the two had “renewed their commitment to solidarity principles between the two countries and at the European level,” and had discussed “ways to move forward on a joint sovereignty agenda.”

Unusually, there was no news conference after the talks.

Moments before Scholz’s arrival, French government spokesman Olivier Veran had downplayed any rifts, saying the Franco-German pair of leaders had always been able to overcome difficulties that arose from time to time.

Since he took power in 2017, Macron has instructed French officials to never criticise Germany publicly, French government sources have told Reuters, and to solve disagreements behind closed doors.

But the number of issues on which France and Germany – the EU’s two richest and most influential members – are at odds is growing, from the bloc’s defence strategy to its response to the energy crisis, relations with China and even fiscal policy.

That pushed French officials to think of a way to be more “assertive” with Berlin, they said, which culminated last week with the unprecedented cancellation of the ritual Franco-German Cabinet meeting, underlining the French president’s frustration.

Berlin blamed logistical difficulties and played down the rift.

After the lunch, German officials said the three hours and 20 minutes spent together by the two leaders were a “very constructive and forward-looking conversation” and that the pair got along better than media reports would suggest.

It was not clear, however, whether any progress had been made on issues on which the two countries are at loggerheads, including whether to cap gas prices in response to Russia’s war in Ukraine or German subsidies to its industry and households.

The rift is also impacting Europe’s plans to build its next generation of fighter jets, gas pipeline projects across the EU and German plans to let China invest in its ports.

(Reporting by Michel Rose in Paris; Additional reporting by Dominique Vidalon in Paris and Matthias Williams and Andreas Rinke in Berlin; Editing by Richard Lough Philippa Fletcher and Matthew Lewis)