Manufacturing surveys: What do they tell us about the health of the global economy?

July’s readings of the Markit Purchasing Manufacturers’ Surveys (PMIs) offered no real standout surprises. However, they seem to support our view that global growth is softening at the margin in the second half of this year, and that we are seeing less synchronised performance between economies. In fact, the improvement in global manufacturing over the last year may now have reached its cyclical peak.

Our analysis shows that fewer countries are making a positive contribution to global manufacturing growth, a trend that has been building since March. Only 30% of individual countries saw accelerating growth rates in July compared with nearly 80% of countries at the end of last year (based on the index change over the last three months). 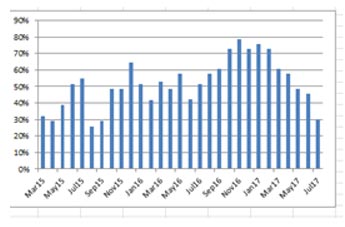 There also appears to be more dispersion at the individual country level. Manufacturing surveys in the last three months show that developed economies are now outperforming emerging economies – a situation that contrasts with earlier in the year when we saw a higher degree of synchronisation in global growth. Emerging economies, especially the commodity exporters and to a lesser extent China, are contributing to this divergence. In the case of China, there remains a discrepancy between the official and ‘unofficial’ manufacturing surveys, which we monitor closely. Even among developed economies, though, we are seeing wider levels of dispersion at the country level. Much of the developed world’s current outperformance is attributable to the Eurozone members, while the UK is one of the weakest countries and the US is plateauing.

Manufacturing surveys are of course a proxy and do not tell the whole story about general economic conditions. However, they are an important barometer of overall business sentiment and, as we saw in 2015, the health of manufacturing can have important ramifications for the broader economy.

We do not yet consider this moderation in activity to be overly concerning. Moreover, it is only to be expected that some of the froth has evaporated from the elevated readings seen earlier this year. For now, we believe that these slower rates of expansion signal the transition from a cycle of manufacturing improvement and recovery to one of stabilisation.

There is, though, one important caveat. The marginal softening in global manufacturing, and perhaps broader economic momentum, is occurring at a time when central banks are considering removing monetary policy accommodation. While we believe the current environment remains supportive to risk assets and corporate fundamentals, we are starting to take a more cautious view further out as policymakers continue to normalise monetary conditions. In consequence, we believe that it is prudent to begin reducing risk in portfolios incrementally.