Ford to make call on Europe job cuts by mid-Feb as buyers circle German site
Our website publishes news, press releases, opinion and advertorials on various financial organizations, products and services which are commissioned from various Companies, Organizations, PR agencies, Bloggers etc. These commissioned articles are commercial in nature. This is not to be considered as financial advice and should be considered only for information purposes. It does not reflect the views or opinion of our website and is not to be considered an endorsement or a recommendation. We cannot guarantee the accuracy or applicability of any information provided with respect to your individual or personal circumstances. Please seek Professional advice from a qualified professional before making any financial decisions. We link to various third-party websites, affiliate sales networks, and to our advertising partners websites. When you view or click on certain links available on our articles, our partners may compensate us for displaying the content to you or make a purchase or fill a form. This will not incur any additional charges to you. To make things simpler for you to identity or distinguish advertised or sponsored articles or links, you may consider all articles or links hosted on our site as a commercial article placement. We will not be responsible for any loss you may suffer as a result of any omission or inaccuracy on the website. 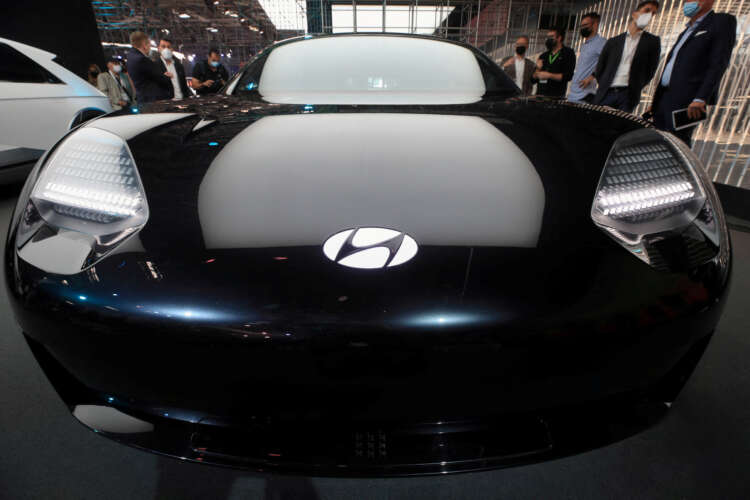 By Heekyong Yang and Ben Klayman

SEOUL/DETROIT (Reuters) -After grabbing the No. 2 spot in the U.S. electric vehicle market with stylish, long-range models, Hyundai Motor and Kia are the automakers with the most to lose from new rules that halt subsidies for EVs made outside North America.

These two companies, which make the popular Ioniq 5 and EV6 models, sold more than 39,000 EVs in the United States between January and July – doubling last year’s sales and blowing past Ford Motor Co, Volkswagen AG and General Motors Co.

Only about 20 EVs qualify for subsidies under the new rules, among them models from Ford and BMW, and starting next year, GM and Tesla Inc. The rules also specify requirements for EV battery materials and parts sourcing from 2023.

Other foreign carmakers such as Toyota Motor Corp which will also be affected by the law have less at stake because they offer fewer models or command less market share.

“If all things are equal and if I buy this one I get a $7,500 tax credit and if I buy that one I don’t, I love you Hyundai but I’m going to go with the one where I can get a tax credit,” said Andrew DiFeo, a Florida-based dealer who has seen a few potential customers already drop Hyundai EVs as a preference.

Hyundai Motor Group, which announced over $10 billion in U.S. investments some three months back including a $5.5 billion EV plant in Georgia, is not pleased.

Biden had thanked Hyundai for the investments in May: “Thank you again for choosing the United States. We will not let you down.”

An official at a large Hyundai supplier who has spoken to senior officials at the company told Reuters that the automaker was caught off guard by the law.

“So much for not letting us down,” said the person, who spoke on condition of anonymity. “It’s a big mess.”

A senior government official said on Tuesday Seoul has asked Washington to postpone the new rules until the completion of the Georgia factory in 2025. South Korea has said the new law may violate treaties such as the U.S.-South Korea free trade agreement.

“Our U.S. EV factory plan was to get subsidies in light of the growing EV market in the United States … the new law negatively and directly affects us,” said a company official who declined to be identified because they are not authorised to speak to media.

While the auto group is considering bringing forward the construction start of the factory to as early as this year, analysts still expect a drop in sales due to a loss of momentum.

Analysts said it was too early yet to quantify how much the new rules will cost the companies in revenue and profit, but several said they would likely use incentives to attract American shoppers, a move that could push up costs.

After Biden signed the Act on Aug. 16, shares in Hyundai and Kia fell some 4% each. They have since recovered.

“We are internally considering diverse ways to cope with the Act,” Hyundai Motor Group said in a statement to Reuters.

While Hyundai and Kia’s American EV sales added up to just over a tenth of Tesla’s volumes and roughly 9% of the U.S. market share, they suggested that the companies were on their way to cement their position as a top EV player in the country.

Hyundai will launch it first EV sedan Ioniq 6 early next year in the United States, a car that analysts had expected could compete with Tesla in the U.S. market because of its pricing.

Kia has not confirmed plans for a U.S. launch of the EV9, an SUV much bigger than the EV6, though analysts expected it to be a hit with American consumers who prefer big cars. Seoul-based Daol Investment & Securities analyst Yoo Ji-woong said Kia would likely consider making the EV9 in the United States to get subsidies.

Yoo is sanguine that all automakers will ultimately benefit.

“It may take a few years, but eventually the law will help make electric cars more affordable.”

(Reporting by Heekyong Yang in Seoul and Ben Klayman in Detroit; Additional reporting by Aishwarya Nair in Bengaluru; Editing by Sayantani Ghosh and Kim Coghill)

Kosovo pushes ahead with car licensing rule resisted by Serbs