Interest in cryptocurrencies has spiked to an all-time high this year. The fundamental reason behind this is due to the surge in value of established cryptocurrencies such as Ethereum and Bitcoin. With the latter’s value noticeably rocketing beyond an astronomical $6,000 (£4,500) over the course of 2017.

With the spotlight, has come scrutiny over the technology and processes which underpin their success. The main question in the frame being “how are cryptocurrencies created”.

Known as cryptocurrency mining, Reboot Marketing sought to clearly identify what it is and why it has become such a topical issue. Cryptocurrency mining, is a function whereby computers solve complex mathematical problems to verify recently made transactions before they are added to the publicly available digital ledger known as blockchain. Consequently, new coins of a given cryptocurrency are generated and then rewarded to the first ‘miner’ whose set of computers figure out the mathematical problems in hand.

Despite its straightforward premise, for it to be a truly fruitful process, miners need to be able to facilitate the huge amounts of computing power needed to continually work through the mathematical problems and generate more of a given cryptocurrency. Unfortunately, due to the high cost of acquiring all the necessary computing infrastructure, it’s an investment many cannot afford to make. Those desperate to overcome this barrier and capitalise on the current popularity of cryptocurrencies, may still do so through unscrupulous avenues.

One of the mains ways in which this has transpired is by hackers finding websites which have poor site security or web software bugs and then exploiting these flaws by inserting a code which covertly harnesses the processing power of a visitor’s computer to mine a cryptocurrency. This action primarily being enabled by Coin-Hive, who earlier this year introduced a script that could start mining a cryptocurrency known as Monero when a website loaded.

Coin-Hive hoped it would provide websites an alternative revenue stream away from displaying online advertisements, though these intentions have been manipulated by opportunist hackers. Hackers who have maliciously harboured the Coin-Hive script on well-known websites to create an income from unsuspecting visitors. ShowTime, the US video streaming service, being the latest and most prominent website where this monetising technique was deployed. In fact, statistics by anti-virus provider Kaspersky Lab show that they have so far detected 1.65 million computers in 2017infected by malware which has installed mining software without the permission of users/owners.

To mark Computer Security Day on the 30th of November 2017, Reboot Marketing analysed finding from YouGov, to identify Brits attitudes towards those hijacking their personal computers to mine Bitcoin. 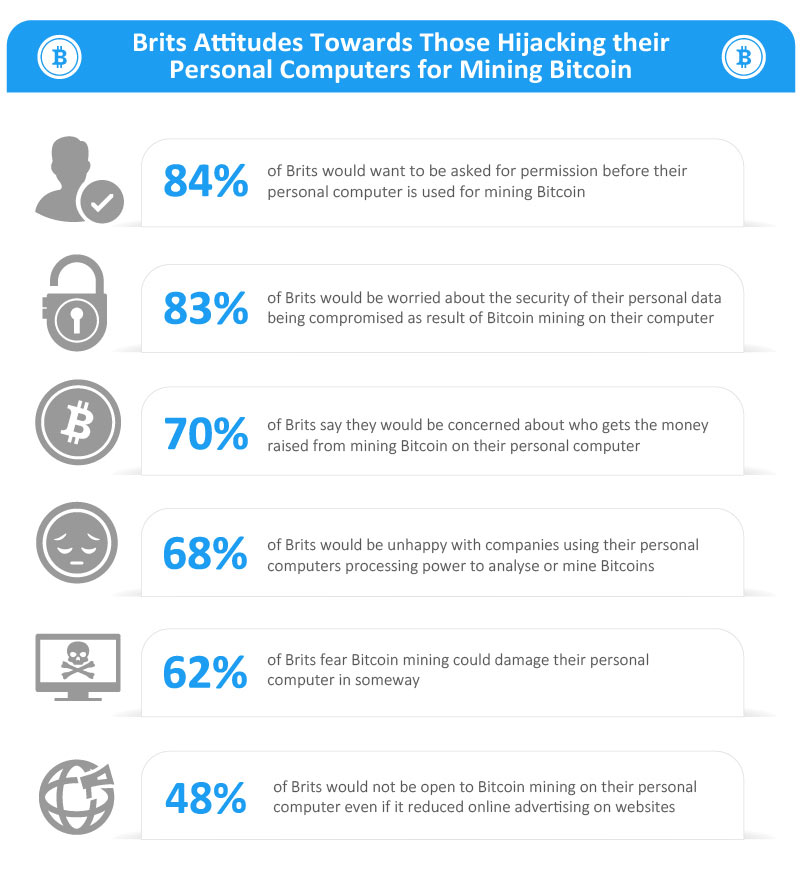 “It’s a shame certain individuals and groups see best fit to mine cryptocurrencies in such a way. Not obtaining permission before carrying out this practise is intrusive and unwarranted. It’s also adding another unwelcomed association to the existing negative perceptions of cryptocurrencies. With scripts being developed, in the form of web extensions, to prevent browsers from being hijacked by opportunist cryptocurrency miners and more cyber-security measures on the way – it’s hoped this so called ‘cryptojacking’ does not gain any more momentum”.

“Cryptocurrency mining is a computationally intensive task. It requires a hefty number of devices to access their processing power. Unfortunately, due the financial constraints of setting-up a sizeable network of computers, hackers have adopted genuine cryptocurrency mining tools in a dishonest way, by hiding code on websites to mine a cryptocurrency on the computers of unwary visitors. It’s a process used primarily for personal gain to capitalise on the current boom in cryptocurrencies. This research certainly shows that Brits are not too fond of the practise, with the majority rightly concerned about their personal data being breached”.

Brits would pay £107 for an extra week’s holiday allowance