Over 8,500 New Jobs Created In Financial Services From Foreign Direct Investment In 2016-17

For many experts and professionals in business – ‘Brexit’ in their view was a calamitous decision following 52% of UK’s electorate vote to leave the European Union after 43 years of membership. One of the underlying worries amongst these individuals was the impact uncertainty (manifested through Brexit) would have on foreign direct investments (FDI)in the UK.

Despite their concerns, even in the immediate aftermath of Brexit, the United Kingdom still managed to attract bias the impact uncertainty (manifested through Brexit) would have on foreign direct investments (FDI)in the UK.g investments. These investments were highlighted by pharmaceutical giants GlaxoSmithKline, who announced their intention to invest an astronomical £275 million in three of its UK manufacturing sites just a month after the EU referendum (July 2016).

Furthermore, Ernst & Young (EY) surveyed 505 international decision-makers, and found the UK is still reigning supreme as the most desirable European country for foreign businesses to invest in new projects.

This notion was further supported by figures from the Organisation for Economic Co-operation and Development (OECD) who illustrated that FDI inflows had soared to £197 billion in 2016; an increase of 20% from the previous year (2015 – £164 billion) and signified the highest level of recorded inflows since 2005.

Turnerlittle.com, specialists in banking and investment, investigated the jobs which would be created from foreign direct investments in the UK. Turner Little analysed the latest findings from Gov.uk to show exactly how many new jobs had been projected in UK’s different sectors as a direct result of FDI made in the financial year of 2016-17.

Turner Little found that overall, foreign direct investments made in the financial year of 2016-17 are projected to create a total of 75,226 new jobs.

On the other end of the scale, FDI projects in the extraction industries will create the least number of new jobs (642) – the equivalent of just 12 jobs per week. Only slightly higher with more new jobs(787) predicted from FDI projects made in 2016-2017, was the chemicals and agriculture sector.

“I am very optimistic about the country’s future. Despite the lurking shadow of Brexit, the United Kingdom will continually strive to improve as well as nurture those aspects which allow businesses to

thrive – even in challenging conditions. From infrastructure to technology – the United Kingdom is harbouring an environment which has the ability to successfully facilitate businesses from a range of different industries. This research certainly shows that many foreign businesses and investors share the same sentiments about the future of business in the UK – making large investments and creating new jobs even in the backdrop of Brexit.’ 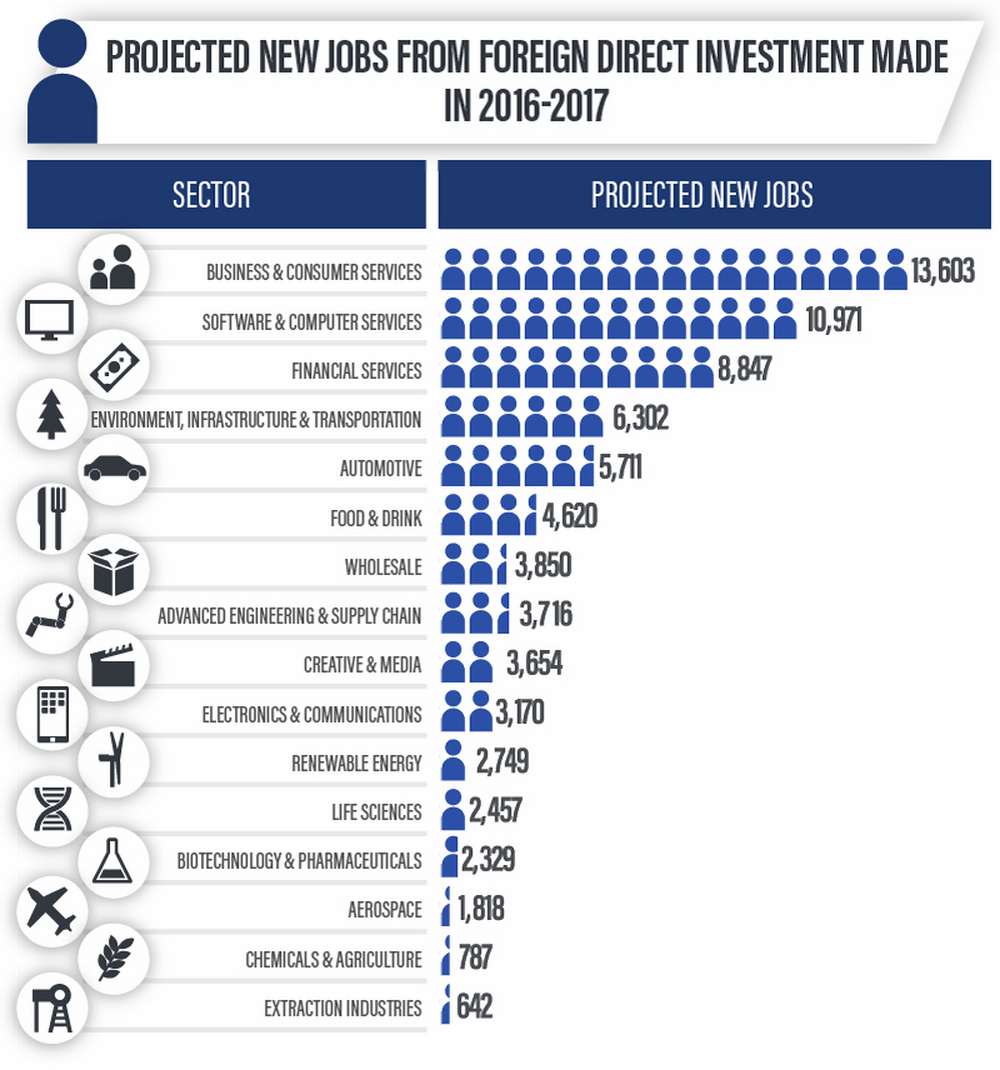