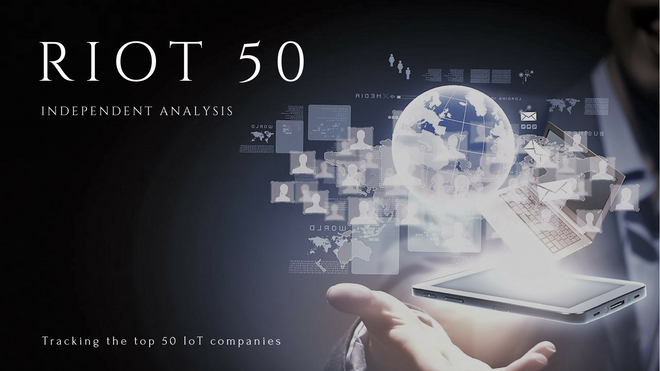 Previously, the Riot subscription included the weekly Around the Web (ATW) edition, as well as Riot’s long-form articles. In addition, the quarterly Significant Deals Done (SDD) database and IoT Mergers and Acquisitions (M&A) list, were flanked by monthly reports or whitepapers, covering IoT trends and technologies that IoT companies would need to keep track of, challenging the status quo with unwavering independent thought

However, after conducting market research, Rethink discovered that the SDD was not seen as valuable as the rest of the Riot subscription. So, after much consideration and many meetings Rethink decided it was ‘out with the old and in with the new’, and has created the latest offering – ‘Riot 50’.

Rethink believes that the Riot 50 will make the Riot subscription even more invaluable to businesses, providing untampered analysis of the IoT markets. Since adding Riot 50, Riot subscriber Alicia Asín, CEO and co-founder of Libelium, said that Riot “is great with nothing more to add”.

Alex Davies, editor of Riot and senior analyst at Rethink notes “this is, after all, a non-exhaustive list and there are likely going to be entries in this list that do not initially scream IoT, at first glance, but trust us, they are. Riot is the leading source of IoT news on the web, and we have used our experience in writing about the scene to influence what we include in this list”.

How can you become a subscriber?

Mobile scan-and-go: From cashier to concierge

World Oceans Day 2018: Drones are transforming our interaction with the oceans