Some in Shanghai allowed out to shop; end of COVID lockdown in sight 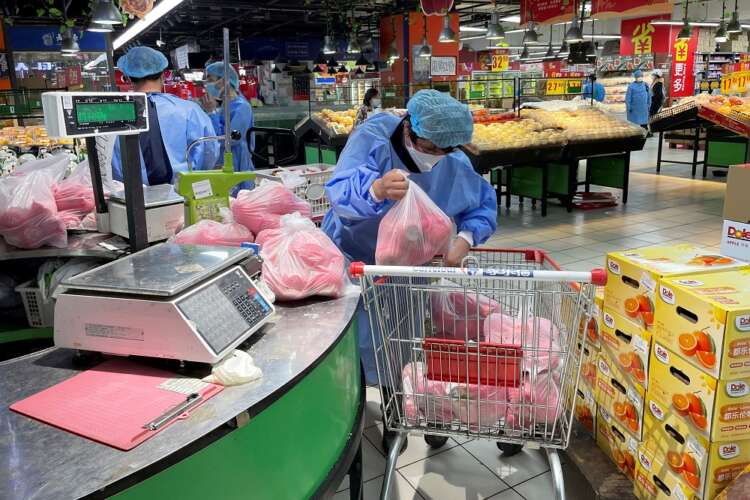 SHANGHAI/BEIJING (Reuters) – More Shanghai residents were given the freedom to go out to shop for groceries for the first time in nearly two months on Thursday as authorities set out more plans for exiting the city-wide COVID-19 lockdown more fully.

The commercial hub of 25 million recorded no new infections outside quarantined areas for a fifth day in a row, further cementing its “zero COVID” status with each day.

“I feel very happy, the lifting of the lockdown is starting,” shopper Zhong Renqiu said at a Carrefour supermarket in the central Changning district that had just reopened.

“We’ve mainly relied on government provisions and group-buys,” said Zhong, who was stocking up on eggs, goji berries, black sesame and oats.

But officials are wary of the danger of new flare-ups of infection in their high-stakes effort to gradually re-open and are planning to keep most residents largely indoors this month, and prioritising work and production over other activities.

Deputy mayor Zhang Wei said economic activity had been recovering with businesses able to operate with workers living on site and that authorities would allow more to resume normal operations from the beginning of June.

The city was “striving to achieve a full resumption of work and production as soon as possible,” he said.

“The rhythm of work resumption” would be based on the COVID situation, he said, adding that for the rest of May, on-site work restrictions would remain in place.

Some housing compounds in the Changning district distributed passes on Thursday for residents to enter the Carrefour store.

The passes were for one person from each household to go to the shop for 40 minutes and spend up to 500 yuan ($74). Residents were advised to walk or ride a bicycle to the shop and told to queue at the entrance two metres apart.

Some shoppers wore protective gowns, while others wore face shields and gloves.

In another positive sign, four of the city’s 18 metro lines will resume operations from Sunday.

Shanghai reported fewer than 800 new cases. None were from outside quarantined areas, for a fifth day in a row.

The capital Beijing has not imposed a city-wide shutdown but has gradually tightened restrictions over the past month to contain a small but persistent outbreak of a few dozen new infections a day. It reported 55 new cases for May 18, down from 69.

Deputy mayor Zhang said Shanghai’s economy was gradually returning to normal with daily container throughput at its ports at 90% of the levels of a year ago.

Pudong Airport cargo throughput has reached 70% of last year’s levels, while the number of freight vehicles entering and leaving the city was back to two thirds, he said.

Roughly half of Taiwanese companies that suspended work in China because of COVID had resumed production, the democratically ruled island’s economy minister said.

In another sign of improvement in China’s manufacturing, data showed retail car sales jumped 27% in the first half of May from the same period in April.

But they were still down 21% from a year earlier.

COVID curbs in May were not as strict and widespread as in April but still weighed on growth.

Goldman Sachs on Wednesday cut its 2022 economic growth forecast for China to 4% from 4.5%, well below the government’s official target of about 5.5%, and warned it could slip further.

China’s “zero COVID” policy has placed hundreds of millions of people in dozens of cities under various curbs and disrupted global manufacturing and firms ranging from Apple and Tesla to Starbucks and Walmart.

The New York Federal Reserve reported in its latest update to a worldwide index of supply problems that air freight costs between the United States and Asia rose in April and delivery times lengthened globally.

This could mean persistent inflation around the world and rising borrowing costs.

British luxury brand Burberry said on Wednesday its prospects depended on how quickly China, its biggest market where sales had fallen, recovers from lockdowns.

(Reporting by Brenda Goh and David Stanway in Shanghai; Yifan Wang and Ryan Woo in Beijing; the Beijing and Shanghai bureaus; Writing by Marius Zaharia; Editing by Robert Birsel)

Spiralling costs could take Greek graviera cheese off the menu