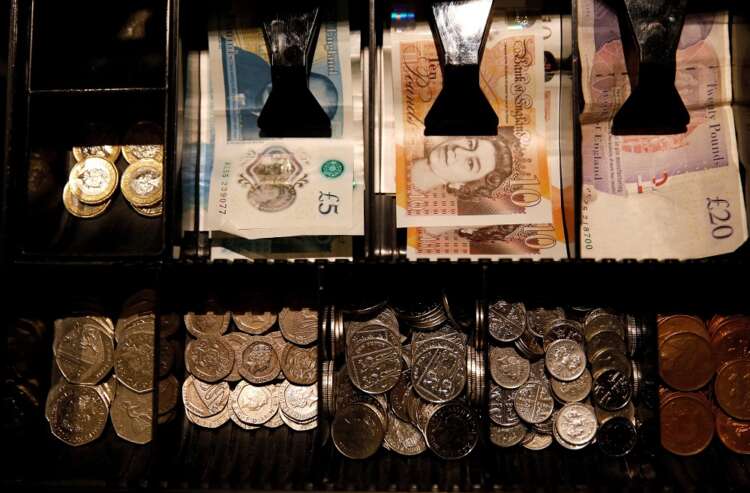 LONDON (Reuters) – The pound held broadly steady on Tuesday, as gains following UK employment data were offset by caution ahead of a key reading of U.S. consumer inflation.

Britain’s jobless rate rose for a second month and there were other signs in data on Tuesday that some of the inflationary heat in the labour market is cooling as the economy stumbles, including a rise in older people looking for work.

But the Bank of England (BoE) – which looks set to raise interest rates for the ninth consecutive meeting on Thursday – was likely to note the strongest increase in basic pay on record, not including the period around the COVID-19 pandemic.

“This adds to thoughts of a full employment recession and supports some of the more hawkish pricing of the Bank of England (BoE) policy cycle,” ING strategist Chris Turner said, adding that this might not be enough to prompt the central bank to raise rates by more than half a percentage point, but could give the pound a lift.

“Today’s UK data could light the fuse of a Cable rally, were US CPI data to oblige. Our prior has been that this rally stalls around this $1.2300/2310 area – but a close above here warns of another three to four big figures higher during thin, year-end markets,” Turner said.

Money markets show investors are not fully convinced the BoE will only raise rates by half a percentage point when the Monetary Policy Committee meets on Thursday.

In September, when the pound crashed to a record low in the wake of former finance minister Kwasi Kwarteng’s fiscal plan, rate expectations blew out along with bond yields, leading investors to price in a peak rate of 6.31% by July 2023.

Since then, those expectations have cooled off and markets point to UK rates peaking at around 4.68% by August, where they are expected to hold until around December 2023, when the first rate cuts are priced in.

Coming up first though is U.S. monthly consumer inflation, which is due to be released later on Tuesday and is forecast to show price pressures moderated for a fifth month in November.

The question for investors is whether or not that will be enough to temper expectations for U.S. interest rates to peak around 5% by May or June.