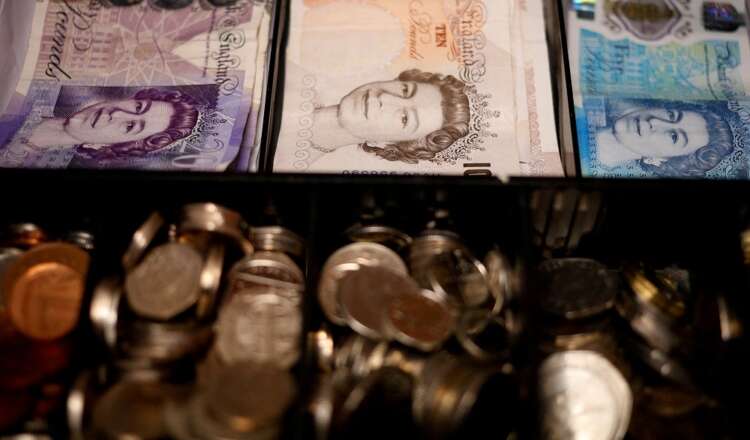 LONDON (Reuters) -The pound snapped a four-day streak of losses on Tuesday in a volatile session, in which the Bank of England was forced to step into the government bond markets again to attempt to stem a damaging debt sell-off.

The BoE extended a series of debt buybacks to include inflation-linked bonds – predominantly owned by pension funds – which witnessed their biggest rout on record on Monday.

At first sale on Tuesday in afternoon trading, the BoE bought 1.947 billion pounds ($2.15 billion) of inflation-linked debt, roughly half the maximum amount it said it would be willing to buy.

The central bank had already said it would double the amount of long-dated gilts it will buy to ensure a smooth end to its emergency buyback programme that wraps up on Friday.

“Potentially, there could be some clear downside risk in cable, I would think, towards $1.05 and euro/sterling towards 90.00. Certainly, we’ll have to wait and see how it plays out given how fluid the situation in the UK in particular is,â€ Valentin Marinov, who is head of G10 FX strategy at Credit Agricole said.

“It is a difficult situation. Like it or not, the BoE is at the forefront of that effort to try to contain the sell-off and hopefully, with some luck, that will help restore market stability. But it’s paramount that in order to succeed these efforts should go hand in hand with efforts by the government to restore investor confidence,” he said.

Indeed, investors have ditched their exposure to the pound in the last couple of weeks. Weekly data on Friday showed speculators took an axe to both their bullish and bearish bets on the pound, given the market’s extreme volatility. [CFTC/]

One-week sterling volatility is trading at almost 20%, and while down somewhat from the spike to almost 30% in the wake of the government’s mini-budget, it’s still well above the average of closer to 8% that has prevailed over the last five years, according to Refinitiv data.

The pound hit a record low of $1.0327 on Sept 26. It has since recovered around 7% in value, but is still showing an 18% loss so far this year – its weakest annual performance against the dollar since 2008.

On Sept. 23, British finance minister Kwasi Kwarteng unveiled a package of unfunded tax cuts worth around 45 billion pounds, including breaks for top earners. The pound promptly nosedived and the gilts market went into a tailspin, putting pension funds at risk of insolvency.

Gilt yields soared to their highest in years, prompting the BoE to step in to buy long-dated bonds.

Kwarteng has since scrapped the plans to abolish the top rate of tax and brought forward the date he will detail his other plans.

But sterling’s problems extend beyond the liquidity crunch in the gilts market. The British economy is buckling under the weight of almost double-digit inflation and is expected to tilt into recession this year due to the effects of a cost-of-living crisis, sky-high energy bills and the drag of Brexit.

“We continue to see downside risks for the pound, as levels around $1.10 do not mirror the fragility of the UK bond market. Cable is pressing the 1.1000 support as we speak,” ING strategist Francesco Pesole said.

“We expect a decisive break below this level today or in the coming days, and currently target the $1.00-1.05 area for the pair into year-end.”

Data on Tuesday showed UK unemployment fell to its lowest since 1974, at 3.5% in the three months to August, but this was driven by a record jump in the number of people leaving the labour market.

Average weekly earnings excluding bonuses rose at a rate of 5.4% in the three months to August, but with consumer inflation running at 9.9%, worker pay is not keeping pace.