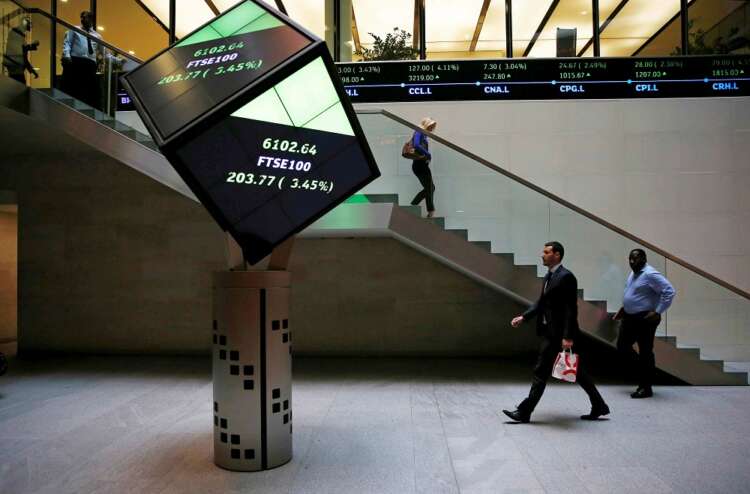 NEW YORK (Reuters) – A gauge of global stock markets lost ground after four straight sessions of gains, while the euro rose in volatile trading after the European Central Bank raised interest rates for the first time in more than a decade as it seeks to tame inflation.

The ECB had for weeks flagged a 25 basis point hike, until earlier this week, when sources told Reuters the central bank was weighing a bigger move. The central bank also introduced a bond protection plan, called the Transmission Protection Instrument (TPI), that is designed to cap the borrowing costs across the region.

“One of the biggest takeaways is that the ECB is more open-ended on their forward guidance. Previously, they suggested that they will do 50 in September and effectively 25 basis points per meeting thereafter. Now they are more open to do larger, smaller, potentially no hike or more hikes. I think what they want to do is offer themselves more flexibility and not pre-commit,” said Erik Nelson, macro strategist at Wells Fargo in New York.”

“The ECB’s impact on the euro will depend a lot on the transmission protection instrument… if this is a credible tool and it offers protection on peripheral bonds, then overall this could be euro-positive.”

The ECB also said it had approved a plan, to be published later in the day, to cap bond yields in an effort to help heavily indebted countries like Italy, whose coalition government fell after the resignation of Prime Minister Mario Draghi.

After briefly inching higher, stocks lost ground, weighed down by a pullback in U.S. equities as a drop in crude prices sent the energy sector .SPNY sharply lower and overshadowed gains in Tesla .TSLA.O following its quarterly earnings.

As the U.S. corporate earnings season rolls along, 91 companies in the benchmark S&P 500 index have reported quarterly results, with 78% topping expectations, according to Refinitiv data. That’s slightly below the 81% beat rate for the past four quarters but well above the 66% rate since 1994.

U.S. economic data was also on the soft side with weekly initial jobless claims touching a fresh 8-month high and a gauge of factory activity in the mid-Atlantic region for July hitting its lowest in slightly over two years.

The data comes ahead of the Federal Reserve’s policy meeting next week, in which it is largely expected to hike rates by 75 basis points.

The Japanese yen strengthened 0.11% versus the greenback to 138.06 per dollar as the Bank of Japan remained an outlier among central banks and left its super-loose monetary policy unchanged on Thursday, as expected, and raised its inflation forecasts slightly. Sterling GBP= was last trading at $1.1938, down 0.26% on the day.