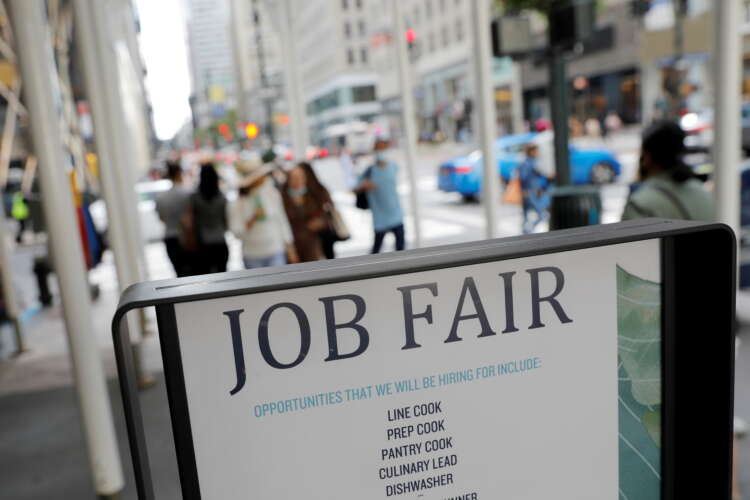 WASHINGTON (Reuters) – U.S. job growth likely accelerated in October as the headwind from the surge in COVID-19 infections over the summer subsided, offering more evidence that economic activity was regaining momentum early in the fourth quarter.

But the Labor Department’s closely watched employment report on Friday is expected to show worker shortages persisting, even after federal government-funded unemployment benefits have expired and schools have reopened for in-person learning.

Nonetheless, it will join rising consumer confidence and services sector activity in painting a more favorable picture of the economy, after the Delta variant of the coronavirus and economy-wide shortages of goods restrained growth in the third quarter to its slowest pace in more than a year.

“September was a bad dream, but since then vaccines have beaten back the Delta virus and the economy is marching forward and upward,” said Sung Won Sohn, a professor of finance and economics at Loyola Marymount University in Los Angeles. “We could have seen employment gains probably approaching 800,000, the primary constraint is labor shortages.”

Nonfarm payrolls likely increased by 450,000 jobs last month, according to a Reuters survey of economists. The economy created 194,000 jobs in September, the fewest in nine months.

October’s anticipated job gains would bring employment about 4.5 million jobs below its peak in February 2020. Estimates ranged from as low as 125,000 jobs to as high as 755,000.

Education employment is a wild card after sharp drops in payrolls at state and local governments as well as private institutions contributed to curbing job growth in September.

Pandemic-related staffing fluctuations in education have distorted normal seasonal patterns. Shortages of bus drivers and other support staff have been well documented. Education hiring in September was lower than usual, resulting in a decline after stripping seasonal fluctuations. Economists believe October was the same story.

“We think that seasonally adjusted education-related employment could fall by another 50,000 in October, as the increase in hiring that month anticipated by the seasonal factors does not fully materialize,” said Daniel Silver, an economist JPMorgan in New York.

The drop in COVID-19 cases has allowed Americans to travel, attend sporting events and frequent restaurants, boosting demand for workers.

Indeed, labor market indicators were fairly strong in October, with the ADP National Employment Report on Wednesday showing an acceleration in private payrolls. The Conference Board’s labor market differential – derived from data on consumers’ views on whether jobs are plentiful or hard to get – hit a 21-year high.

The number of Americans filing new claims for unemployment benefits fell below 300,000 in October and has remained under that level for four straight weeks.

The unemployment rate is forecast falling to 4.7% from 4.8% in September. While companies desperately want to hire, millions remain unemployed and outside the labor force.

This labor market disconnect has been blamed on caregiving needs during the pandemic, fears of contracting the coronavirus, early retirements, massive savings and career changes as well as an aging population and the recently ended expanded unemployment benefits. There were 10.4 million unfilled jobs as of the end of August. About five million people have left the labor force since the pandemic started.

Federal Reserve Chair Jerome Powell told reporters on Wednesday that “these impediments to labor supply should diminish with further progress on containing the virus, supporting gains in employment and economic activity.”

The Fed announced it would this month start scaling back the amount of money it is pumping into the economy through monthly bond purchases.

According to Beth Ann Bovino, chief economist at S&P Global Ratings, there was no evidence that generous pandemic jobless benefits discouraged the unemployed from seeking work. Bovino said the reason for people not taking up jobs appeared to stem more from the decision to drop out of the workforce entirely, signaling a structural shift rather than a temporary change.

She also noted that many people who moved out of cities during the pandemic have yet to return, which could create a mismatch between the open jobs and location.

“The labor market conditions since the pandemic began highlight a possible structural shift in the labor force, with 60% of the five million missing workers comprising people who have left the workforce entirely,” said Bovino.

There are concerns that worker shortages could be exacerbated by the White House’s vaccine mandate, which comes into effect on Jan. 4 and applies to federal government contractors and businesses with 100 or more employees.

There has also been a rise in strikes as workers take advantage of the tight labor market to demand more pay and better conditions. The walk out by about 10,000 Deere & Co workers will have no impact on October’s payrolls as it started in the middle of the period during which the government surveyed households and businesses for the employment report.

“Recent strike activity and vaccine mandates have been challenging factors on the supply front and suggest that labor market improvement will be gradual in coming months,” said Sam Bullard, a senior economist at Wells Fargo in Charlotte, North Carolina.

The scramble for workers is boosting wage growth, which together with record savings should help to underpin consumer spending over the holiday session, though salaries are lagging inflation and shortages of goods abound.