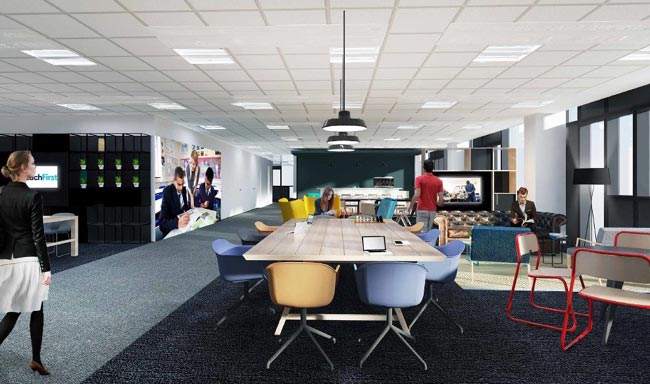 Teach First, the registered charity working to tackle educational inequality in England and Wales, has consolidated its network of UK offices by deploying an innovative and bespoke unified communications (UC) solution from VIA. More than 650 employees across nine locations are now able to communicate more effectively and efficiently by using VIA Voice.

After taking the decision to relocate its headquarters from London’s South Bank to North Greenwich, Teach First sought a cloud-based solution that could be tailored to fit its exact requirements. The platform not only needed to boost workforce connectivity within its London office, but would also allow the charity to benefit from a truly joined-up approach to communications across its eight additional UK offices, including Nottingham, Cardiff, Manchester and Birmingham. Being dedicated users of Office 365, Teach First also needed a UC platform that integrated seamlessly with the Microsoft suite of applications.

Teach First contacted VIA to explore the possibility of replacing a number of different conventional phone systems across multiple locations with a single cohesive solution. Following initial discussions, the charity conducted a site visit of Redbridge College to see VIA Voice in action. The educational establishment has used the platform with a bespoke call routing solution for more than a year. This prompted Teach First to carry out a month-long trial at its office in Birmingham, before rolling out VIA Voice across each of its nine locations.

VIA Voice incorporates Skype for Business, which had been used by a number of Teach First’s employees beforehand. The solution operates over the Internet and replaces the need to have a traditional phone network. It allows employees to talk, instant message, email, video chat or take part in conferences across a variety of devices, such as landlines, smartphones, PCs, and tablets. This helps the workforce to stay continuously connected and reachable even when they are on the road or working from home. All users have ‘dial in and out conferencing’ and Direct Dial In (DDI) numbers, whilst Teach First has also implemented VIA’s advanced call routing application to ensure callers are quickly directed to the most suitable department.

By modernising its telephony and communications infrastructure, Teach First will save approximately £20,000 per annum on direct costs, including service charges, maintaining equipment and call costs. The charity will also make significant indirect cost savings due to efficiency gains triggered by hot desking, the ability for staff to communicate better when working remotely, reduced travel, enhanced video conferencing, and greater overall workforce collaboration.

The contract represents another significant win for VIA and also includes the provision of the latest UC equipment. Employees were provided with Jabra Evolve 65 headsets, which offers both USB and Bluetooth connectivity. Meanwhile, Teach First also ordered 40 Polycom Trio 8800s, the certified Skype for Business conference phone, for its meeting rooms and open office areas.

Mark Sutton, IT Director at Teach First, said: “We required a solution that would allow us to modernise our telephony infrastructure, whilst benefitting from a joined-up approach to communications across our nine offices – and VIA Voice certainly fits the bill. We have already noticed that employee communications have improved, especially between different offices. These efficiency gains will lead to both direct and indirect cost savings, allowing us to focus on our vision of a day when no child’s educational success is limited by their socio-economic background.”

Alex Tebbs, Director, VIA, said: “This is a substantial contract for VIA and we are extremely proud to have developed a world-class UC solution that delivers true value for money. Our management portal ensured we could phase the rollout and divert incoming calls temporarily whilst the new numbers were being sent out. This prevented any downtime during the installation process.”

What can we Learn from Financial Services Security?

UK’s most liveable city, Manchester sets its sights on the world, from tourists to property investors