U.N. expects Ukraine-Russia grain deal to be implemented in a few weeks -officials 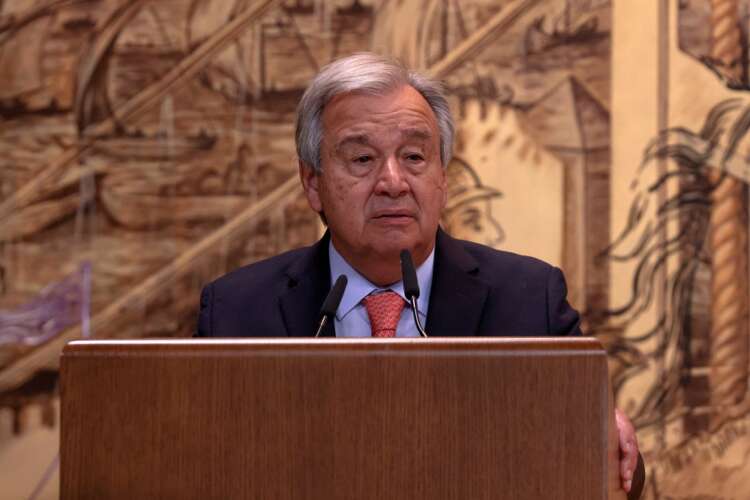 ISTANBUL (Reuters) – The United Nations expects a deal to resume Ukrainian grain exports through the Black Sea to be fully operational in a few weeks and restore shipments to pre-war levels of 5 million tonnes a month, two senior U.N. officials said on Friday.

Ukraine, Russia, Turkey and the United Nations signed the deal in Istanbul in what Turkey has said will mark the first step toward easing an international food crisis exacerbated by Moscow’s invasion of its neighbour.

Russia and Ukraine are among the world’s top food exporters and Moscow’s Feb. 24 invasion has blockaded Ukrainian ports, stranding dozens of ships, leaving 20 million tonnes of grain stuck in silos and driving up world grain prices.

The U.N. officials said the parties agreed the general outline of the initiative such as the ports involved, the establishment of a monitoring centre in Istanbul, ways of inspecting the ships involved, and the limitations of the plan.

“We are looking at a very quick rate of implementation,” one of the officials said. “We start (Saturday) to establish the Joint Coordination Centre (JCC),” the person said, adding that minor issues remained to be worked out before the initiative could be put fully into effect.

“We are talking about a few weeks before we will see proper implementation of vessels going in and out,” the official said, although there could be an “initial movement of ships” to show that the mechanism will work.

Under the plan, Ukrainian officials will guide ships through safe channels across mined waters to three ports, including the major hub of Odesa, where they will be loaded with grain.

Ships will then exit Ukrainian territorial waters in the Black Sea, transit the Bosphorus strait to a Turkish port for inspection and later head to their destinations.

“We are aiming for a monthly export of about 5 million metric tonnes, which was the pre-war level from those three ports,” the official said.

The plan will be initially active for 120 days but will be renewable, the officials said, adding they “do not anticipate to stop it any time soon”.

“The fact that two parties at war – and still very much at war – have been able to negotiate an agreement of this kind…I think that’s unprecedented,” the official said.

Asked how the implementation of the plan would be monitored, the official said representatives from all parties would work in the JCC to oversee operations, vessel inspections, and possible incidents. Both Ukraine and Russia have agreed not to attack any vessels involved in the initiative, the officials said.

“This centre in Istanbul is going to be the heartbeat of the operation and is very similar to… ceasefire monitoring,” said the official. The deal will act as a “de facto ceasefire” along the safe sea routes identified by Ukraine, the official said, although the word “ceasefire” is not part of the accord.

The United Nations has been working for over two months with NATO member Turkey, which has a maritime border with Ukraine and Russia in the Black Sea, to broker what U.N. Secretary General Antonio Guterres called a package deal to both resume Kyiv’s exports and facilitate Russian grain and fertilizer shipments.

The second U.N. official said a separate pact signed on Friday would smooth Russian food and fertilizer exports and that the United Nations welcomed supportive clarifications from the United States and European Union on sanctions against Russia.

“The Secretary General commits our efforts to facilitate the exports from the Russian Federation…in food, fertilizers, and also raw materials to produce fertilizers,” the official said.

Biden says he is ‘doing well,’ working after testing positive for COVID

Analysis-Aviation nurses a nasty headache as travel recovers from COVID