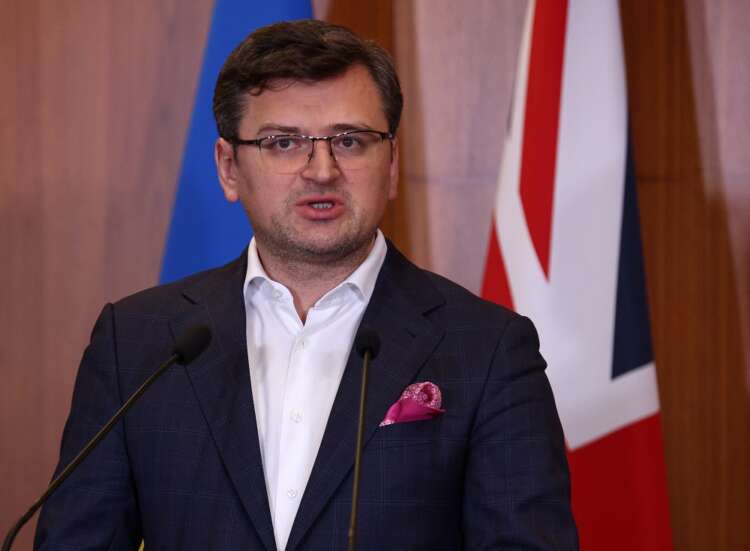 By Daphne Psaledakis and Robin Emmott

Urged by Ukrainian Foreign Minister Dmytro Kuleba to end bureaucracy-driven delays, U.S. Secretary of State Antony Blinken said the United States and 30 other countries were sending weapons to Ukraine and that that process would intensify.

“We’re not going to let anything stand in the way of getting Ukrainians what they need, and what we believe, to be effective,” Blinken said.

He spoke of “new systems” that have so far not been provided by NATO allies, but declined to go into details.

Asking for planes, land-based anti-ship missiles, armoured vehicles and air defence systems, Kuleba made his plea to a special session at NATO headquarters.

He addressed his counterparts from NATO’s 30 members plus the European Union, Finland, Sweden, Japan, New Zealand and Australia, urging Germany in particular to speed up deliveries, saying procedures were taking too long in Berlin.

“I think the deal that Ukraine is offering is fair. You give us weapons, we sacrifice our lives, and the war is contained in Ukraine,” Kuleba said.

After six weeks of a war that Moscow describes as a “special military operation”, Ukraine says Russia continues to shell eastern cities following its forces’ withdrawal from around Kyiv.

Kuleba also reiterated a demand that the EU stop buying Russian oil and gas, as the bloc promised a fifth round of sanctions against Moscow by Friday.

“We will continue to insist on a full oil and gas embargo,” Kuleba said.

Outrage over killings of civilians in the Ukrainian town of Bucha near Kyiv – where Russia denies any wrongdoing and says evidence was fabricated – appears to have galvanised Western support.

EU foreign policy chief Josep Borrell said a fifth package of sanctions, including a ban on coal, would be agreed on Thursday or Friday, while EU lawmakers voted in a non-binding resolution for “an immediate full embargo” on Russian energy imports.

But Blinken, while saying he had a strong sense that Europeans were committed to ending their dependency on Russian energy, also conceded that that could not be as quick as “flipping a light switch.”

The bloc’s high level of dependency on Russian oil and particularly gas makes a broader energy embargo – which would cut off a significant source of revenue for Moscow’s war – unlikely for the time being.

Blinken said reports of rape and executions in Bucha would not impact peace negotiations between Ukraine and Russia as much as whether Moscow thought peace was worth pursuing.