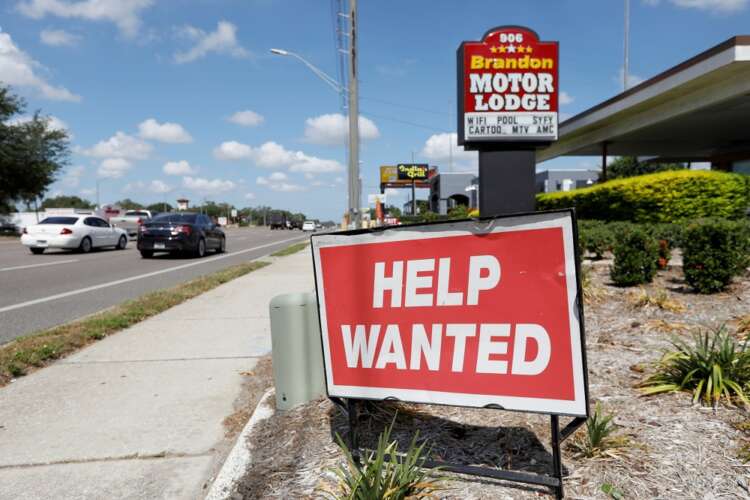 WASHINGTON (Reuters) – U.S. employment increased more than expected in October as the headwind from the surge in COVID-19 infections over the summer subsided, offering more evidence that economic activity was regaining momentum early in the fourth quarter.

Still, the broad-based gain in employment added to rising consumer confidence and services sector activity in painting a more favorable picture of the economy, after the Delta variant of the coronavirus and economy-wide shortages of goods restricted growth in the third quarter to its slowest pace in more than a year.

“The one cloud on the horizon was the stubbornly depressed participation rate,” said Seema Shah, chief strategist at Principal Global Investors. “At this point, with reduced benefits, a return to in-person schooling and the drop in COVID rates, we should be seeing a recovery in participation.”

Nonfarm payrolls increased by 531,000 jobs last month, the survey of establishments showed. Data for September was revised higher to show 312,000 created instead of the previously reported 194,000. Economists polled by Reuters had forecast payrolls rising by 450,000 jobs.

Manufacturing added 60,000 jobs, with 28,000 of the positions at motor vehicle manufacturers. Construction payrolls increased by 44,000 jobs.

But state and local government education shed 65,000 jobs. The government said pandemic-related staffing fluctuations in education have distorted normal seasonal patterns, making the changes in employment in the sector challenging to interpret. Shortages of bus drivers and other support staff have been well documented. Overall government payrolls fell by 73,000 jobs.

Details of the smaller survey of households were also upbeat, with strong employment gains. The unemployment rate fell to 4.6% last month from 4.8% in September. Though 104,000 people entered the labor force last month, millions remained outside, making it harder for employers to fill 10.4 million jobs which were open as of the end of August.

The labor force participation rate, or the proportion of working-age Americans who have a job or are looking for one was unchanged at 61.6%. It has remained within a narrow range of

The number of people unemployed for 27 weeks or more dropped 357,000 to 2.3 million. They accounted for 31.6% of the 7.4 million people officially unemployed last month.

The labor market disconnect has been blamed on caregiving needs during the pandemic, fears of contracting the coronavirus, early retirements, massive savings and career changes as well as an aging population and the recently ended expanded unemployment benefits. With many people who moved out of cities during the pandemic yet to return, there could also be a mismatch between the open jobs and location.

Federal Reserve Chair Jerome Powell told reporters on Wednesday that “these impediments to labor supply should diminish with further progress on containing the virus, supporting gains in employment and economic activity.”

The Fed announced it would this month start scaling back the amount of money it is pumping into the economy through monthly bond purchases.

There are concerns that the White House’s vaccine mandate, which comes into effect on Jan. 4 and applies to federal government contractors and businesses with 100 or more employees, could compound the worker shortages.

There has also been a rise in strikes as workers take advantage of the tight labor market to demand more pay and better conditions. The walk out by about 10,000 Deere & Co workers had no impact on October’s payrolls as it started in the middle of the period during which the government surveyed households and businesses for the employment report.

The scramble for workers continued to boost wage growth, with average hourly earnings rising 0.4%. That lifted the annual increased to 4.9% in October from 4.6% in September.

This, together with record savings should help to underpin consumer spending over the holiday session, though salaries are lagging inflation and shortages of goods abound.