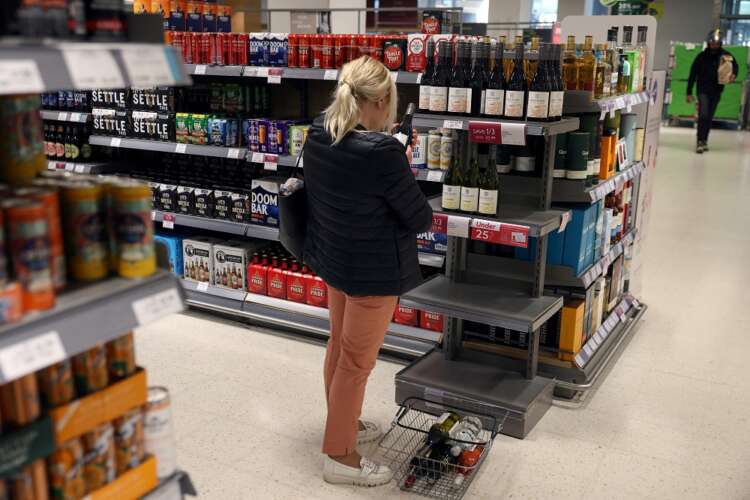 LONDON (Reuters) -British retail sales jumped unexpectedly in April as shoppers loaded up on alcohol and tobacco, likely a blip in an otherwise bleak trend that has driven consumer confidence to all-time lows amid a worsening cost-of-living crunch.

Retail sales volumes rose 1.4% month on month after a 1.2% drop in March, the Office for National Statistics said. Economists polled by Reuters had expected a 0.2% monthly fall.

Retail sales in the three months to April fell 0.3%, after a 0.7% drop in March. Compared with a year ago, sales volumes were 4.9% lower, marking the biggest annual drop since January 2021.

Earlier on Friday, Britain’s longest-running gauge of consumer confidence, the GfK survey, fell to its lowest since records began in 1974.

British consumers were hit last month by a double whammy of surging in household energy costs and higher taxes, and data published this week showed inflation hit a 40-year high of 9.0%.

The Bank of England thinks inflation will climb above 10% later this year.

“With price pressure set to persist through the rest of the year, households are likely to have to pare back discretionary spending, putting the brakes on economic growth,” said David Muir, senior economist at Moody’s Analytics.

“For the Bank of England, the challenge will be to walk the fine line between bringing inflation down while not tipping the economy into recession.”

This was “possibly due to people staying in more to save money,” ONS statistician Heather Bovill said.

Online clothes sales also did well as people got ready for summer holidays and weddings, she added.

Leading supermarket groups including Tesco and Sainsbury’s have warned of lower profits this year and Premier Foods, the maker of Mr Kipling cakes and OXO stock cubes, said it would raise prices of its products.