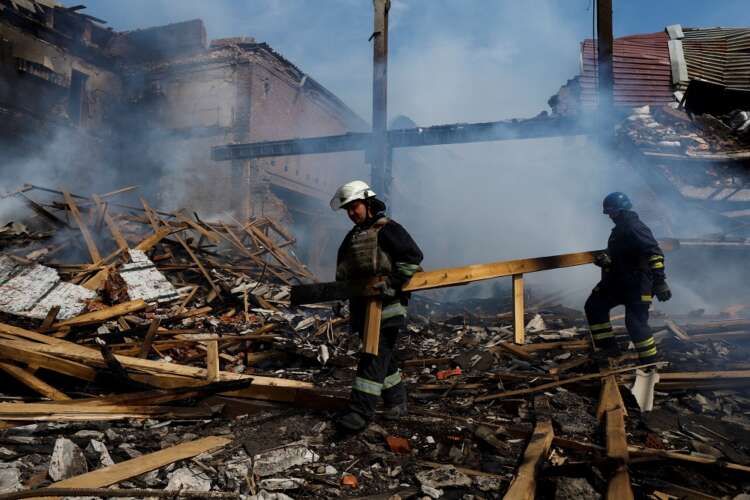 (Reuters) – Ukraine announced the start of a long-awaited counter-offensive to retake territory in the south seized by Russian forces since their invasion six months ago, a move reflecting Kyiv’s growing confidence as Western military aid flows in.

* A team from the U.N. nuclear watchdog (IAEA) is heading to Ukraine’s Zaporizhzhia nuclear plant, the agency’s chief said, as Russia and Ukraine traded accusations of shelling in its vicinity, stirring fears of a radiation disaster.

* Officials installed by Russia in Ukraine said that a Ukrainian missile strike punched a hole in the roof of a fuel depot at the Zaporizhzhia plant, the RIA Novosti news agency reported.

* Russia’s defence ministry said Russian forces shot down a Ukrainian drone that was trying to attack the Zaporizhzhia reactor complex.

Reuters was unable to independently verify either of the reports.

* The United States said Russia did not want to acknowledge the grave radiological risk at the nuclear plant, adding that was the reason it blocked a nuclear non-proliferation treaty deal’s final draft.

* Russia’s air force hit workshops at a Motor Sich factory in the Zaporizhzhia region where helicopters were being repaired, Russian state news agency RIA quoted the defence ministry as saying.

* Reuters could not verify battlefield reports.

* Britain’s defence ministry said it was not clear how Russia would achieve an announced large increase in its armed forces but the boost was unlikely to substantially increase its combat power in Ukraine.

* Thousands of people fleeing Russia-occupied areas of south Ukraine are arriving in a city near the Zaporizhzhia nuclear site despite fears of a radiation leak from fighting. For many, shelling in their hometowns is a more urgent danger.

* Across Ukraine, authorities are building bomb shelters and repairing thousands of buildings damaged by Russian shelling before the country’s nearly 6 million school-aged children return to school in September – in person or online.

* Bogdan and Olga have had no electricity, gas or running water for more than a month in their village near the frontline in eastern Ukraine, but they have no plans to leave. They survive on the food they have grown, baking bread in an oven in the garden and drawing water from a well.

* Ukrainian President Volodymyr Zelenskiy accused Russia of economic terrorism as the cost of Europe’s energy crisis spiralled with Germany on the hook for at least 19 billion euros to bail out its biggest importer of Russian gas.

* European Union foreign ministers, meeting in Prague on Tuesday and Wednesday, may agree tightening the issuance of visas for Russians and start debate on a wider ban on tourist visas though there is no agreement on that, EU officials said.

* Germany will keep up its support for Ukraine “for as long as it takes”, Chancellor Olaf Scholz said, calling for an enlargement of the European Union to eventually include Ukraine, Moldova and Georgia.