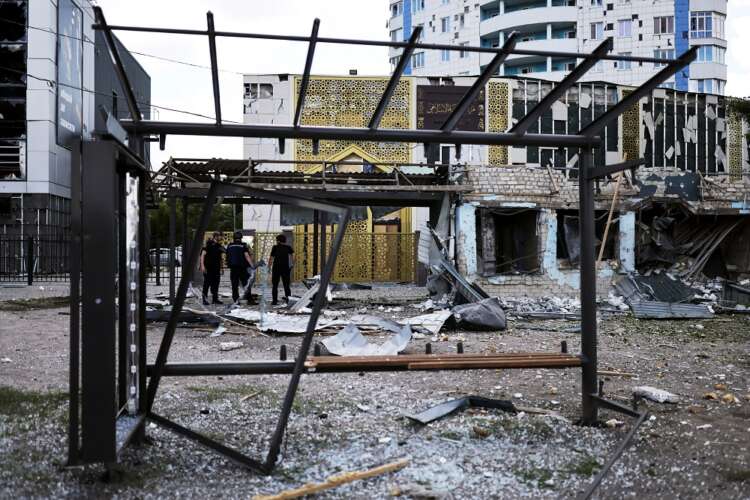 By Natalia Zinets and Marc Jones

KYIV/LONDON (Reuters) – Ukraine will ask international bondholders to agree to a 2-year delay on its debt payments so it can focus its dwindling financial resources on repelling Russia, a government resolution published on Wednesday showed.

Facing an estimated 35-45% crash in GDP this year following Moscow’s invasion in February, lawmakers have instructed the country’s finance ministry to negotiate the deferral on its roughly $20 billion of debt by August 15.

The delay, which many creditors say is likely to be accepted and was quickly backed https://www.bundesfinanzministerium.de/Content/DE/Standardartikel/Themen/Europa/Krieg-in-der-Ukraine/statement-zum-schuldenmoratorium-fuer-die-ukraine.html by major western powers, would come just in time to put off around $1.2 billion of debt payments due at the start of September.

The government’s resolution posted on its website said, “all interest payment dates for the bonds” would be deferred under the plan.

In a bid to avoid what would be classed as a hard default, Kyiv plans to offer lenders, which include governments and many of the world’s largest investment funds, additional interest payments once the freeze ends.

Ukraine has estimated a fiscal shortfall of $5 billion – or 2.5% of pre-war GDP – a month, which economists calculate pushes its fiscal deficit to 25% of GDP, compared with just 3.5% before the conflict.

On top of that researchers from the Kyiv School of Economics estimate that it will already take over $100 billion to rebuild Ukraine’s bombed infrastructure, while the head of the EU’s powerful financing arm, the European Investment Bank, has warned it could run into trillions.

“We, as official bilateral creditors of Ukraine, intend to provide a coordinated suspension of debt service,” a group of governments including the United States, Canada, France, Germany, Japan and Britain said shortly after Ukraine made its proposal.

“We also strongly encourage all other official bilateral creditors to swiftly reach agreement” the group added.

Wednesday’s move had marked something of a U-turn from Kyiv, which had repeatedly said in recent months that it planned to keep up debt payments despite the war. 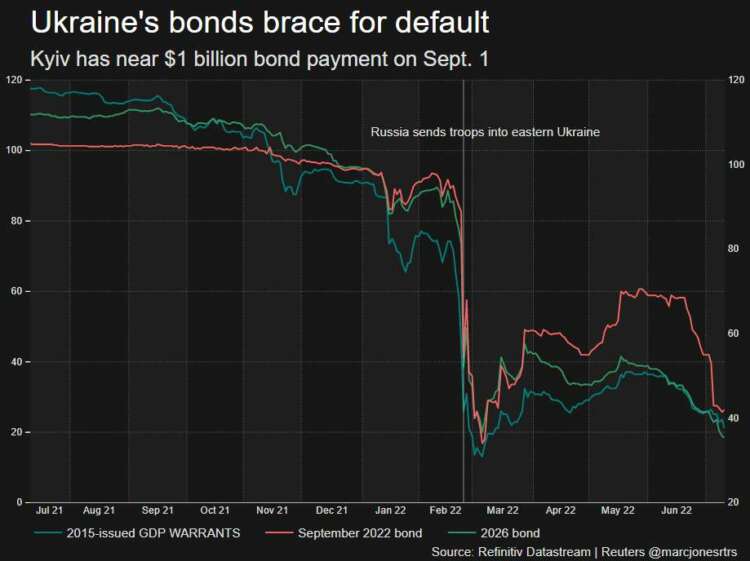 Speculation that a debt freeze request could be imminent however was fanned last week after the country’s state-run energy firm Naftogaz also requested one.

“A proper restructuring still needs to happen, said Viktor Szabo, a portfolio manager at abrdn which holds Ukraine’s government bonds. “But it cannot be done before the situation normalizes on the ground, i.e. a sustained cease-fire at least.”

Ukraine has a host of bonds, borrowings which add up to over $20 billion in total. The government also plans to postpone payment on a growth-linked ‘warrant’ offered after its last restructuring in 2015, which was designed to pay investors handsomely if the economy hit its stride.

Tymofiy Mylovanov, an adviser to the Ukrainian presidential office, had urged Western countries to increase their financial support in recent weeks.

Global institutions such as the International Monetary Fund, World Bank and Western governments have committed to providing $38 billion since the invasion, although almost 80% of that support is made up of loans rather than aid.

Wednesday’s move from Ukraine had little impact on the bonds that Kyiv wants to delay. The prices of most of those bonds had already slumped roughly 80% since the start of the year when the build up of Russian troops on its eastern borders began.