WHY IS COMMUNICATION VITAL IN THE EVENT OF A CYBER-ATTACK?

Can companies minimise their dependency on cloud service providers?
Our website publishes news, press releases, opinion and advertorials on various financial organizations, products and services which are commissioned from various Companies, Organizations, PR agencies, Bloggers etc. These commissioned articles are commercial in nature. This is not to be considered as financial advice and should be considered only for information purposes. It does not reflect the views or opinion of our website and is not to be considered an endorsement or a recommendation. We cannot guarantee the accuracy or applicability of any information provided with respect to your individual or personal circumstances. Please seek Professional advice from a qualified professional before making any financial decisions. We link to various third-party websites, affiliate sales networks, and to our advertising partners websites. When you view or click on certain links available on our articles, our partners may compensate us for displaying the content to you or make a purchase or fill a form. This will not incur any additional charges to you. To make things simpler for you to identity or distinguish advertised or sponsored articles or links, you may consider all articles or links hosted on our site as a commercial article placement. We will not be responsible for any loss you may suffer as a result of any omission or inaccuracy on the website. 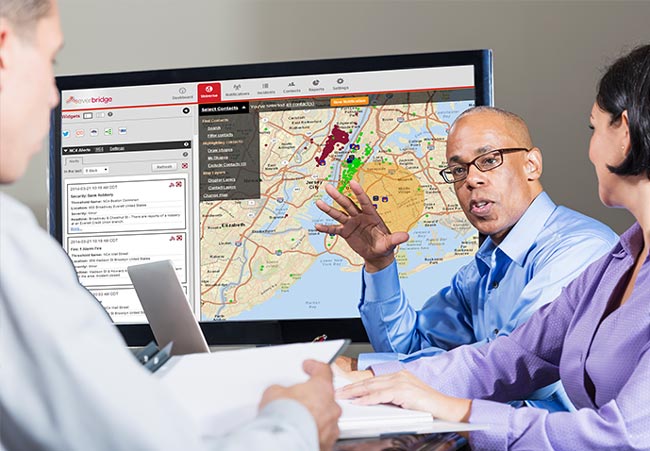 Cyber-attacks pose a constant threat to organisations. Nick Hawkins, Managing Director of Everbridge EMEA, discusses how cloud-based communications platforms can improve critical communications and limit the damage caused by an increasing number of cyber-attacks and IT outages.

In today’s globalised business environment, organisations of all sizes face the prospect of falling victim to a cyber-attack or IT outage that could cause serious damage to their reputation, infrastructure and ability to operate.

According to the recent Emergency Communications Report from the Business Continuity Institute, IT outages and cyber-attacks were the two mainreasons for a company to declare a state of emergency. As cyber-attackers become more complex and cases become more frequent, it is imperative that organisations have the tools in place to resolve the issue before irreparable damage is done.

What is a cyber-attack?

Despite improvements in cyber-security, criminals have developed sophisticated ways to disrupt systems and steal data.

The 2016 Internet Security Threat Report from Symantec showed that there has been a 35% increase in ransomware attacks in the last year.  More organisations’ networks are being held hostage by cyber-criminals and are unable to operate after discovering the attacks.

Other forms of cyber-attack are also on the rise: the latest report fromArbor Networks states that during the first six months of 2016, there was an average of 124,000 global Distributed Denial of Service (DDoS) attacks each week – a 73% increase in peak attack size from 2015.

As these various forms of cyber-attack become more prevalent and wide-spread, the fallout from a security breach is having a significant impact on day-to-day business operations.

The million pound question: the cost of cyber-attacks

Over the last year cyber-attacks have cost UK businesses £34.1 billion, with each attack costing an average of £4.1 million and taking 31 days to resolve.

Investing large sums of money in cyber-security is not also a pre-requisite for success.  There have been a number ofhigh profile cyber-attacks against large corporations in recent times: the BBC; Sony’s PlayStation Network;HSBC; and eBay. However, it is not only large organisations that are targeted; government departments and agencies, rail networks and local businesses regularly fall victim to cyber-attacks.

When attacks occur crucial services are compromised and a company’s reputation can be negatively affected, reducing consumer confidence and brand value.  Large scale attacks alsohave the ability to impact share price value and a company’s revenue.

Communicating in a crisis

Planning what to do when a cyber-attack occurs is important, but how victims communicate in an attack is equally critical.When IT systems go down, an organisation needs to be able to communicate with employees and co-ordinate an effective response.  Crisis management plans need to be in place to help businesses return to normal as quickly as possible.

An effective crisis management plan consists of two key components: quick, reliable and secure communication with all employees to notify them of the crisis; and the efficient deployment of resources to resolve the crisis.

Most organisations rely on internal email to communicate in the event of an emergency, despite the fact that a cyber-attack is likely to have compromised the email network. In doing so, organisations are exasperating the issue and could provide hackers with additional company information.

The key is in the cloud

When internal networks have been compromised, cloud-based communication platforms have the ability to provide visibility of an incident within minutes, ensuring that emergency notifications are sent out to relevant employees quickly and securely. These messages can be sent out using more than 100different contact devicesand delivery methods to ensure the notification reaches the right people and isacknowledged and acted upon.

Cloud-based communication tools enable secure two-way messaging andensure that organisations can inform key stakeholders and customers quickly and accurately.In the event of a cyber-attack critical communications platforms can use GPS data to determine where the nearest IT executive is; send them an emergency notification to alert them to the crisis; and ensure action is taken swiftly.  At the same time the platformcan inform every relevant employee of the issue, the actions being takenand thetime it will taketo resolve.

For any organisation, a multi-functional communication tool promises to find the root of a cyber-attack and deploy all available resources to minimise its business impact.

As technology continues to advance, cyber-attackswill become increasingly common and organisations need to have the toolsto communicate and recover quickly in the event of such a crisis. It is an organisation’s response to a cyber-attack that willultimately determine the severity of its impact.

Nick Hawkins joined Everbridge as Managing Director EMEA in April 2015.  Nick is an experienced business leader and has managed sales and service teams within the Services, IT and Communications industries for more than 25 years.  Nick has extensive experience in the security industry and spent more than 10 years in the Metropolitan Police.

What can accountants learn from Great Britain’s Olympic team?

What’s the tech behind regtech?