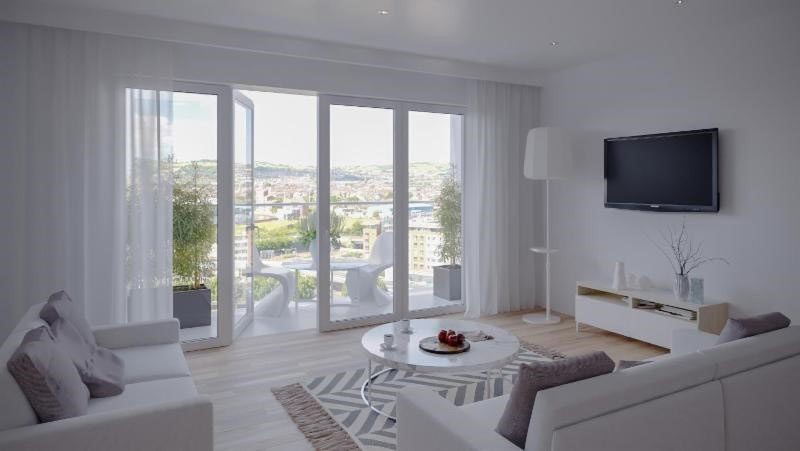 House prices in Northern Ireland remain some 40% below their 2007 peak, but lack of supply is pushing them steadily upward. In light of rapidly increased demand for new homes, Property Frontiers has launched the second phase of the Frontiers’ Collection apartments at The Sandford in Belfast.

According to Savills, house prices in Northern Ireland increased faster than in any other UK region in 2014. In 2015, they shot up by 8%, and over the coming three years they are expected to rise by 6% per annum. Lack of supply of new dwellings is one of the main reasons behind the projections, despite construction output having grown by 4.1% in Q2 2016, based on data from the Department for the Economy.

Social housing figures back up the need for new housing. According to official government estimates, some 37,000 households are on the registered waiting list for social housing. Northern Ireland’s Minister for Communities has stated an ambition to start a further 9,600 new social homes by 2021, at a rate of 2,000 per year. Meanwhile the Housing Executive’s Northern Ireland Housing Market Review and Perspectives 2014-2017 report has forecast that some 190,000 new homes will be needed between 2008 and 2025. That equates to 11,200 new dwellings per year, but Savills has confirmed that less than half of that number were completed in 2015.

The worsening lack of supply is impacting on prices across the country. Property Frontiers CEO Ray Withers comments,

“We’ve seen prices rise across Northern Ireland over the past couple of years and the Belfast housing market is benefitting from that trend. With buyers able to look forward to the prospect of capital gains paired with steady buy-to-let income, now is the ideal time to launch the Frontiers’ Collection.

“The contemporary style of the apartments is perfectly suited to the needs of Belfast’s dynamic workforce. Many recent graduates and other professionals working in the city’s booming digital tech sector are keen to make the Titanic Quarter their home and demand for rental property in the city is strong.”

Belfast is the most significant rental market in Northern Ireland, accounting for 43% of all rental transactions in the country. The city’s e-commerce, app and software development and cyber security companies recently led the Tech National 2016 report to put it on a par with London and Manchester as one of the key digital tech clusters in the UK. Professionals working across the industry are keen to rent modern, stylish homes located in the heart of the city, with the Titanic Quarter proving particularly attractive thanks to its unique blend of leisure activities and employment opportunities.

As Northern Ireland’s economy strengthens and housing demand continues to fall further behind supply, many buyers are keen to capitalize on the opportunities that Belfast offers, according to Property Frontiers. Interestingly, Brexit worries are not being felt so strongly in the city as they are in some other areas of the UK, despite Northern Ireland voting overwhelmingly to remain in the EU. As the Northern Ireland Housing Executive summarises,

“Unlike in the mid-2000s, Northern Ireland has over the past few years only experienced steady, sustainable growth. It is therefore unlikely that the expected downturn in the UK housing market will impact significantly on house prices in Northern Ireland.”

What better time to invest?