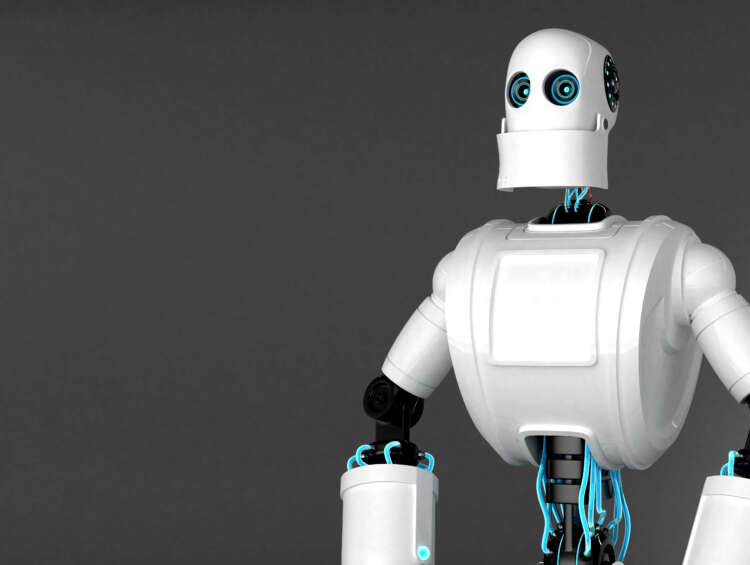 We can’t argue that technology has provided us with some fantastic opportunities that have improved business processes, production methods, the economy, and our own lives.

But, since the creation of the steam-powered cotton mills during the industrial revolution, technology has also been looming over us, like a dark and threatening cloud: It’s taken jobs, destroyed livelihoods, and changed entire industries overnight.

In fact, many industry leaders believe that human robotics will replace over half the jobs in the banking sector within the next few years.

So, will they?! Are our jobs safe?

But what does that mean for the banking sector? How do banks use robotics? What jobs can robots really do and how are they replacing us, mere mortals?

What human robotics are and what they can do in banking

The term “human robotics” falls under many guises: Artificial Intelligence (AI), machine learning, robotics, or simply bots. But they’re all essentially the same thing: Advanced machines, capable of thinking, learning, and performing activities without the help of humans. Robots that have been programmed to learn, think and act like humans.

Banks and financial institutions use human robotics for all sorts of tasks. They use chatbots and virtual assistants to enhance customer service. Automation to streamline and complete routine tasks, like the R&D tax claims process for example. And AI to proactively prevent fraud and improve the speed and accuracy of auditing procedures and compliance reporting.

The benefits of robotics in banking

Robots are brilliant at completing all those laborious, mind-numbing and time-consuming tasks. You know the ones: the reporting, auditing and data inputting type tasks. They make processes streamlined and more efficient, and they eliminate the potential for human error. These benefits allow banks to improve their productivity levels and run their businesses more efficiently and effectively without much effort or input: With increased efficiency and fewer mistakes comes lower costs and the ability to focus on higher ROI tasks. Tasks such as creating new value propositions or researching and developing innovative, new banking solutions to stay ahead of the competition.

“Machines make the processes they’re helping to automate more efficient, which in turn makes it easier, faster, and less expensive to create, deliver, and capture value for the companies that employ the machines”  – Business Models Inc

But what about the downsides?

The downsides of robotics in banking

Robots are, well, robotic! They lack human emotion, they can’t make sound judgement calls and they don’t understand context. Asking a robot to handle an angry, upset customer, for instance, would be disastrous. Or, asking them to decide how much capital to loan a small business, taking into account their environmental, contextual and situational circumstances would surely end badly?!

“Replacing adaptive human behaviour with AI may cause irrational behaviour within ecosystems of humans and things.” – Small Business Bonfire

Because only a handful of people can control them, robots also create an unequal distribution of power, which could be dangerous in the world of banking. And, because robots can take on the tasks that we would normally complete, not to mention they can do them quicker, cheaper and much better than we can, certain jobs in certain fields are becoming obsolete. Unemployment is on the rise and industries are dying a slow, painful death because of robots.

All this is feeding the fear that robots are slowly, but surely, taking over the world.

Will robotics replace banks and bankers?

“Robots to Cut 200,000 Banking Jobs in Next Decade!” “800 million employees to be replaced by the robot revolution!” “50% of All Jobs in Banking to be Replaced by Computers!”

With headlines like these circling us like vultures, are robots about to take over the banking industry? Or, are they creating more opportunities and new jobs?

Why robots WILL replace banks and bankers

“Throughout history jobs have been destroyed because of new innovations. For example, a ‘knocker-up’ used to be a profession in the UK – their job was to wake up workers. But this became extinct after the wind-up alarm clock was invented.” –  Bank of England

When you consider that one robot can do the work of 1.6 humans, you can see why the number of robots doing human jobs is increasing by 14% each year. Plus, employees need breaks, annual leave and pension contributions. They call in sick, expect pay rises and demand perks like health insurance and gym subscriptions. Robots do not.

So, if banks were to start replacing their employees with robots, their costs would fall, their profits would rise and the sage prediction that humans will be doing less than 60% of the work in the near future, are looking worryingly accurate.

This is actually, already happening: Thousands of banks across the world have been forced to close their physical branches as more and more consumers choose online banking, virtual chatbots and robo-advisors over human contact and face to face encounters. As a direct example, over the course of two years, RBS closed 74% of their branches. The Co-op Bank closed 69%, Natwest 49% and HSBC 42%.

And, because the cost of robotics has dropped by 40% over the last decade, it’s becoming easier and cheaper for banks to install and deploy robotic solutions.

“At top-tier investment banks, highly paid employees, like stock and bond traders, have already been replaced by technology.” – Forbes

But is it all doom and gloom?

“There is little evidence to support the theory that mass unemployment arises from introducing robotic processes.” – FinExtra

While Robots are perfectly capable of completing routine tasks with little or no input, there is plenty of evidence that robotics work better when there are people in the mix. Imagine, for example, if the pricing algorithm at two competing insurance companies wasn’t monitored by a human: They would drive profits into the ground in their bid to become the cheapest. Robotics need human input to provide the context behind key decisions and actions.

Robots are good at taking on structured, low-skilled tasks, but terrible at completing unstructured activities that require a degree of emotional intelligence and contextual awareness. This is why humans are, and always will be, needed in the world of banking.

For example, if a robot flags a security breach, it needs a team of experts with solid industry knowledge to assess the situation and take the necessary action.

Researchers disagree on how robots are likely to affect employment in banking. Some think that unemployment will rise, whilst others believe that the new technologies will bring new business opportunities and create jobs that didn’t exist before.

Just as horses were replaced by tractors in the farming industry, robots will replace humans for many jobs across the banking sector and beyond. But, if we can learn to live, work and operate with them, then robots have the potential to enhance the efficiency, quality and productivity of what banks deliver and how they’re run.

“If digitalisation can focus primarily not on replacing human employees, but enhancing what they can do, there will still be as many jobs in financial services after the digital revolution.” – FinExtra

Imagine you’re an investment fund manager that generates a monthly performance report for your 20+ clients. Instead of gathering all the information together, completing the analysis, interpretation, and recommendations and then assembling each report manually, you could use robotics to automate that entire process. This would free you up to spend more time on things like improving under-performing funds and building client relationships. What a better use of your time, skills and knowledge.

The companies that are investing in robotics are finding that the best, most efficient and cost-effective solutions involve humans and machines working together.

Listen, Care, Share: Ofwat’s latest report on the water industry’s handling of customers during the pandemic