Ireland looks to seaweed in quest to curb methane from cows

In the week that global maritime leaders gave the UK a vote of confidence, naming it one of the world’s leading maritime centres, PD Ports is urging UK businesses not to develop ‘Brexit blinkers’ but instead to explore significant new global opportunities as the UK negotiates its exit from the EU. 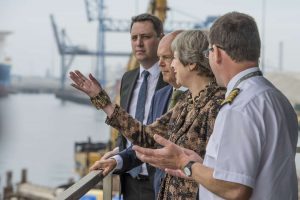 Industry data shows UK export performance as a whole has been stronger outside the Single Market than within the EU over the last decade according to PwC’s UK Economic Outlook report.

Although Brexit will bring challenges to the UK export market, there are equal opportunities to increase their focus on key emerging markets such as Asia in the medium and long-term, allowing businesses to take a truly global approach rather than limiting themselves to trade within the Union.

The call from PD Ports, which owns and operates Teesport, one of the UK’s deepest water ports, has come during London International Shipping Week (LISW) taking place in the capital this week.

The North East is the only region to consistently achieve a trade surplus and at Teesport and on the River Tees, over £1bn has been invested direct by PD Ports and through third party investors to projects in the last decade, including the opening of a new £6m ship-to-shore crane in July. The investment has contributed to ensuring the area has the necessary infrastructure and capacity to meet growing customer demand, keeping both Britain’s import and export industries moving.

Speaking from LISW, business development director, Geoff Lippitt, said: “There’s a risk that concerns about trade following Brexit could lead to some businesses developing ‘Brexit blinkers’ and not actively exploring some of the exciting emerging markets which could be available to them to enable us to truly become a global export centre. The North East especially provides the perfect platform to launch these ventures, with infrastructure and skilled people perfectly placed to drive national export activity.

“Brexit will clearly bring challenges and unpredictability across a number of issues, but it undoubtedly provides an opportunity for companies to operate across a wider global platform. We, as a nation, should ensure that we are very much open for business.”

Prime Minister Theresa May recently visited Teesport to talk about the future economic potential of the region and the major progress of the port as one of the UK’s most important export hubs.

In addition, a campaign to introduce free port status in the North East, enabling raw materials and components to be imported, processed or manufactured and then exported as finished product exempt from taxes, was also recently supported by a number of local MPs.

To find out more, visit http://www.pdports.co.uk/