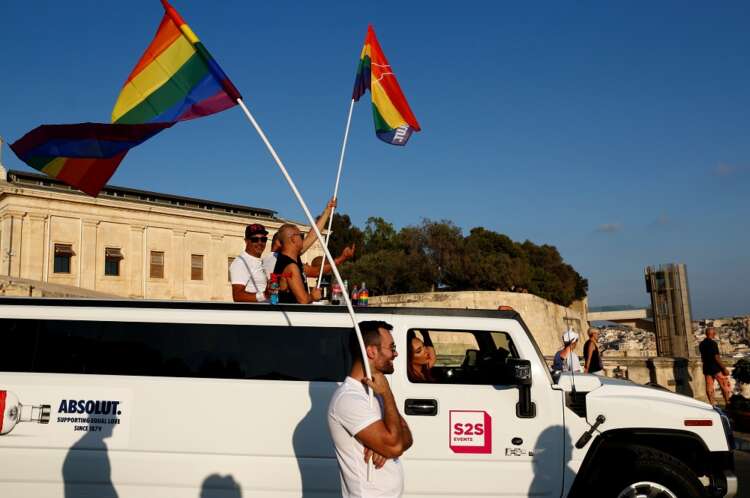 LIMASSOL, Cyprus (Reuters) -A new dynamic has emerged in protecting the rights of the LGBTQ+ communities across Europe, but significant difficulties remain and youngsters are particularly vulnerable, activists said on Thursday.

Malta retained its top spot on the “Rainbow Europe” for 2022 for respect of human rights and full equality, while Azerbaijan, Turkey, Russia and Armenia were at the bottom of rankings among 49 countries compiled by ILGA-Europe, an umbrella organisation for 600 rights advocacy groups.

Denmark, France, Iceland and Montenegro also rose in the rankings, the report, released on Thursday, said. The United Kingdom slipped for falling behind on its promises for reform, while Bulgaria and Romania were not far off from having the lowest rankings in the EU along with Poland.

“After complete stagnation last year, which was extraordinarily worrying to us, there is a new upward dynamic,” said Evelyne Paradis, executive director of ILGA Europe.

“While you hear us speak of some signs of optimism our call today is one of redoubling efforts to make sure there is renewed mobilisation, one focused on action, not just words,” Paradis told an annual forum of European government and civil society groups meeting in Cyprus.

Young people were still particularly vulnerable. One report by IGLYO, the International Lesbian, Gay, Bisexual, Transgender, Queer and Intersex (LGBTQI) Youth and Student Organisation, said there had been a “complete standstill” in inclusion efforts in schools.

One in two LGBTQI learners in Europe had experienced bullying at school, while anti-propaganda laws introduced in five European nations made it impossible for learners to receive inclusive content in schools, IGLYO’s Bella FitzPatrick said.

“I think it’s very apt that many of the advances we have achieved in our community over the past 10-15 years really pertain to adults. But much of the backlash is aimed squarely at youth.

“Its really important to remember that in a lot of cases, schools aren’t that different from what they were 20 years ago. They (children) are still being bullied. They are still being beaten up,” FitzPatrick said.

Factbox – From spreads to shampoo, palm oil is part of everyday life