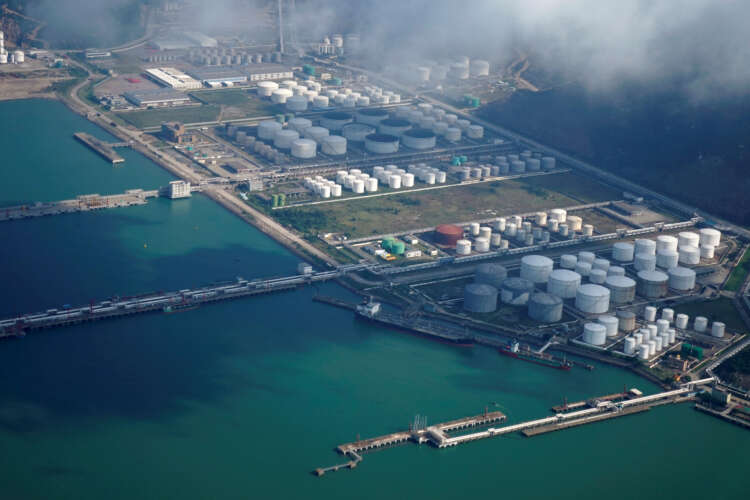 TOKYO (Reuters) -Oil prices dropped on Monday as China’s release of gasoline and diesel reserves eased concerns over tight global supply, while investors cashed in ahead of a Nov. 4 meeting of major crude producers that could increase future production targets.

The drops came after China said in a rare official statement that it had released reserves of the two fuels to increase market supply and support price stability in some regions.

All eyes are on the Nov. 4 meeting of the Organization of the Petroleum Exporting Countries (OPEC), Russia and their allies, together called OPEC+, with analysts expecting them to stick to a plan to add 400,000 barrels per day of supply in December.

Oil prices rallied to multi-year highs last week, helped by the decision by OPEC+ to maintain its planned output increase rather than raising it on global supply concerns.

But Iraq’s state oil marketing company, SOMO, said on Saturday Iraq sees no need to take any decision to increase its production capabilities beyond what has already been planned for OPEC countries.

Kuwait supports the plan to increase global oil supply which has been already agreed by OPEC+, the Gulf nation’s oil minister Mohammad Abdulatif al-Fares said on Monday, according to state news agency KUNA.

A Reuters poll showed that oil prices are expected to hold near $80 as the year ends, as tight supplies and higher gas bills encourage a switch to crude for use as a power generation fuel.

Spurred by rising oil prices, U.S. energy firms added oil and natural gas rigs for a 15th month in a row in October, taking them to the highest since April 2020, energy services firm Baker Hughes Co said on Friday.

Exxon and Chevron are looking to add drilling rigs in the Permian shale basin after sharply cutting crews and output in the region last year, the companies said Friday.